During last year, an estimated 12 elephants and 45 rhinos were poached during 2019, the ministry of environment and tourism’s wildlife crime report of 2019 shows.

The year under review saw wildlife crime cases registered (high-value species only) at 174 with 92 cases related to pangolin, 54 related to elephant and 32 related to rhinos (total of both species). According to the ministry, these include only those cases in which suspects were arrested or products were seized as cases in which only the carcass of a poached animal was discovered are not included, although an investigation was conducted. 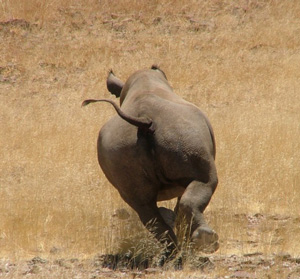 Original photo as published by The Namibian Economist

Cases of conspiracy to poach rhino (pre-emptive arrest cases), were 17. About 28 wildlife crime perpetrators were convicted in 2019, all from poaching and trafficking of rhinos and elephants. According to the report, the highest incidence of wildlife crimes were in the central, eastern and northeastern parts of Namibia with the highest number of incidents were recorded in the Otjozondjupa region.

The ministry’s spokesperson, Romeo Muyunda said wildlife crime is much more than a conservation issue, adding it is organised crime with impacts at many levels.

Muyunda stressed while the data available in the report portrays the serious impacts of wildlife crime on the main target species: pangolin, elephant and rhinos; it also highlights a variety of successes in the fight against wildlife crime.

“Foremost amongst these is the high number of pre-emptive arrests in rhino cases. Criminals are being arrested before they can kill a rhino. We are no longer simply reacting to dead animals on the ground, but are proactively stopping criminals in their tracks,” he said.