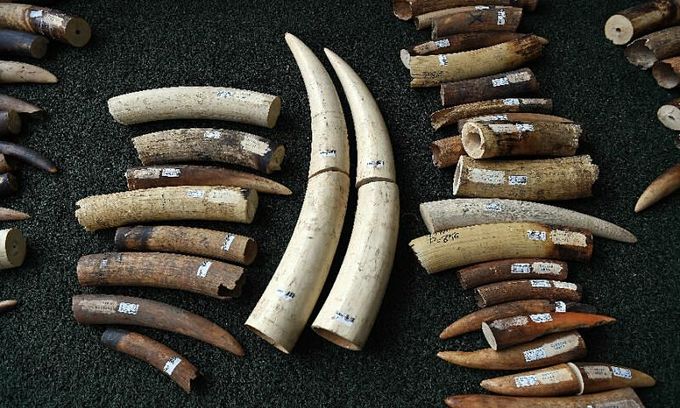 Original photo as published by VN Express. Although ivory trade is banned in Vietnam, the country remains a top market for ivory products. Photo by AFP/Christophe Archambault.

A court in Hanoi on Thursday sentenced three men to between 10-11 years in jail for trading 204 kg of African elephant tusks.

Nguyen Van Nam, 38, considered a “kingpin” in a sophisticated criminal network responsible for transporting and trading ivory and rhino horn between Africa and Vietnam, and his 40-year-old accomplice Duong Van Phong were jailed for 11 years while Nguyen Van Hung, 29, received a 10 year sentence.

Phong admitted a Chinese man and Vietnamese interpreter had told him they wanted to buy a large amount of ivory and would pay him VND12.5 million ($541) per kilo, the Vietnam News Agency reported.

Phong told Nam about the deal, and the latter agreed to supply the tusks.

On September 30, Phong and Nam met the buyers at Ninh Hiep Market in Gia Lam District. Nam asked his cousin Hung to drive a car carrying the elephant tusks hidden in bags to the drop off location.

The trio was caught by police as the transaction was taking place, but the unnamed Chinese man and interpreter fled.

Nam confessed to police he had bought the tusks from a person in Hanoi’s Hoang Mai District, currently under investigation.

The global trade in ivory has been widely outlawed since 1989 after populations of the African giants dropped from millions in the mid-20th century to around 600,000 by the end of the 1980s, AFP reported.

Over 20,000 African elephants are killed each year to meet the demand for ivory trinkets and ornamental objects, according to a 2018 World Wildlife Fund report.

Vietnam first outlawed the ivory trade in 1992, but it remains a top market for ivory products prized locally for decorative purposes or traditional medicine, despite there being no proof of its medicinal qualities.

Weak law enforcement across the country has allowed a black market to flourish, with Vietnam a busy thoroughfare for tusks trafficked from Africa to mainly China.