By NewsroomSeptember 17, 2019Anti-poaching
No Comments

Deputy prosecutor general Ed Marondedze says there are 209 cases of wildlife crimes on Namibia’s court rolls, and 152 of these are new cases recorded from April to June this year.

Speaking on behalf of the Office of the Prosecutor General at a workshop on Wildlife Crime Law amendments held in Windhoek last Friday, Marondedze provided statistics to substantiate the need for stricter penalties for wildlife crimes.

The workshop was attended by various environmental and conservation stakeholders, as well as officials from the environment ministry, the police and the Ministry of Justice.

He said during the same period, only 41 convictions in cases of wildlife crimes were secured, while five cases ended in acquittals.

Marondedze also noted that 54 cases were finalised, and eight cases struck off the court roll.

“During the next quarter, we are hoping to have zero acquittals [which] can only be achieved with increased efforts and thorough investigations,” Marondedze said.

During the same workshop, environment and tourism minister Pohamba Shifeta said the ministry wants to consolidate the 1975 Nature Conservation Ordinance and the Controlled Wildlife Products and Trade Act into one law, and make amendments which should substantially aid in tackling poaching and prosecuting criminals. 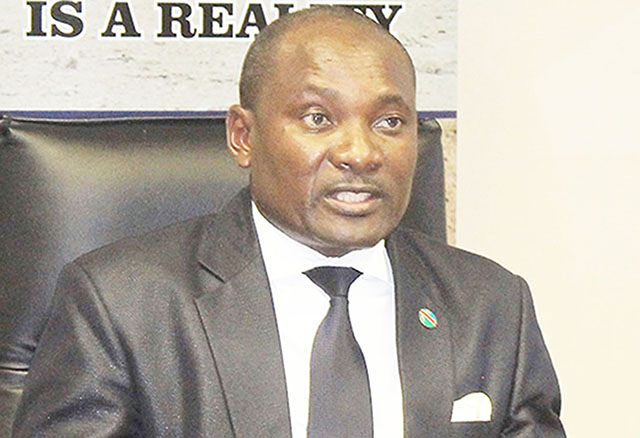 Original photo as published by The Namibian: Pohamba Shifeta

He noted that wildlife trafficking is a growing, multimillion-dollar criminal enterprise, and Namibia, like the rest of the world, is experiencing unprecedented levels of poaching. “Therefore, we require the stricter implementation of strategies as poaching groups increase in numbers,” the minister emphasised.

Among Shifeta’s suggestions were amendments to the bail conditions stipulated for wildlife crime suspects, and increased fines for those caught in possession of, or trading in, wildlife products. “Previously, we failed to consider the actual value of the kill, and we are trying to provide that in the current act,” he said.

“Someone caught in possession of a rhino horn, which is worth about US$90 000 [approximately N$1,3 million] per kilogramme, must pay the full value of their kill; and if you don’t pay, you serve time,” he stressed.

Furthermore, he expounded on implementing stricter bail conditions in which a person arrested for allegedly committing a wildlife crime is monitored more closely to reduce the chances of violating the terms of their release on bail.

“[A suspect] must not leave the area in which they were arrested, and must report to the police regularly. [Currently] there is no control during the time of bail, and usually no one watches over the suspects,” Shifeta continued.

Although the Controlled Wildlife Products and Trade Act was amended in 2017 to increase the penalties for offences involving wildlife products, he emphasised the need to strengthen the legal system and prosecution of illegal trade and hunting.

“We need to treat wildlife crime as a serious crime. Effective operationalisation and implementation of relevant laws and regulations are crucial, and appropriate penalties, prosecution and sentencing must be in place”, he emphasised.

“What the right hand is doing, the left hand also has to know,” he told the workshop participants.