By NewsroomApril 20, 2021Law & legislation
No Comments 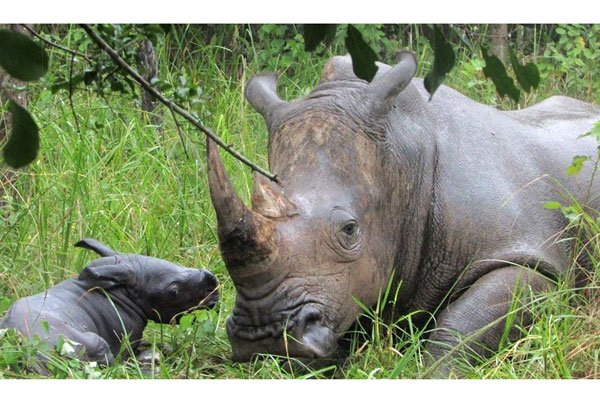 A baby rhino and its mother at Ziwa Rhino Sancturary. Image: As originally published by Daily Monitor

Police in Nakasongola District are holding 27 people in connection with the Thursday incident where property worth millions of shillings was vandalised at Ziwa Rhino Sanctuary.

Unknown people who were traveling in a Coaster bus descended on the Rhino sanctuary offices at Nakitoma Sub County in Nakasongola District and vandalised office equipment including computers and documents.

“They [suspects] were intercepted at Ziwa Rhino Ranch after participating in acts of vandalism, trespass, and malicious damage to property. We shall produce them in court soon after completing our investigations and preparing their file,” Mr Ssemogerere said.

Ziwa Rhino and Wildlife Ranches, the owners of the land where the Rhinos are being bred at Nakitoma Sub County in Nakasongola District, and Rhino Fund Uganda, the organisation that currently manages the Rhinos, have in the last five years been rocked in a bitter row over management of the sanctuary, which risks lives of the rear and endangered herbivore animals species.

Mr Augustine Mudukoyi, a manager at Ziwa Rhino Sanctuary, said the group that attacked the sanctuary disguised as tourists, and they were allowed access to the premises through the main entrance.

“They were traveling in a coaster bus. They later descended on the property at the offices using sledgehammers and crowbars. They destroyed office computers and documents. We alerted police who arrested them,” Mr Mudukoyi said.

Ms Angie Genade, the Executive Director of Rhino Fund, said the attackers targeted the office equipment and documents. “This is very unfortunate, but the matter is being handled by the police.”

She said the incident happened as she attended an emergency meeting in Kampala between officials from the Uganda Wildlife, Rhino Fund Uganda and Capt. Joseph Charles Roy who owns the land. “We are yet to resolve the problem,” she said.

Ziwa Rhino Sanctuary located about 176kms North of Kampala City was established in 2006 as a protected area for re-introduction of the rear white rhino family that had become extinct in Uganda.

The Rhino Sanctuary that sits on 16,000-acre land is now at the centre of a dispute between the family of Capt Joseph Charles Roy who owns the lease, and the management of Rhino Fund Uganda.

In November 2017, Capt Roy terminated the concession with both the Rhino Fund Uganda, and D and D Lodges after a disagreement, but Rhino Fund Uganda sought arbitration through the court as provided in an earlier agreement between the two parties over the management of the sanctuary.

The Daily Monitor has established that at the height of the dispute in February 2019, the parties sought the attention of President Museveni as a way of resolving the matter after a fall out with Ms Genade on allegations of failure to honour the agreement in a concession entered between the two parties on how to share the proceeds from the Rhino Sanctuary and the D and D International Lodges and Restaurant at the sanctuary.