ONGWEDIVA: The ministry of environment has reported a decline in the number of rhinos poached across the country this year.

According to the ministry’s spokesperson Romeo Muyunda, a total of 35 rhinos were poached across the country as at 18 October this year, while 12 elephants were also poached over the same period.

Last year, 72 rhinos and 27 elephants were poached altogether. The ministry also announced that 150 suspects have so far been arrested for alleged poaching compared to 134 nabbed in 2018. Muyunda said the ministry is, however, not in a position to provide the statistics of game that might have died of natural causes or as a result of the persisting drought as some may go unnoticed. 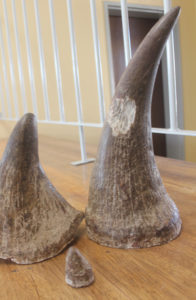 Muyunda, however, acknowledged that the drought currently being experienced countrywide has not spared the national parks and conservancies.

He said as a result the drought conditions in the national and game parks, the ministry has recorded incidents of human-wildlife conflict.

In terms of death of game in the national parks, Muyunda said that the country has not recorded a significant number. “We had challenges of water and the vegetation was also affected, however, our interventions of ferrying water to the hardest hit areas also assisted greatly,” said Muyunda.

Part of the strategies the ministry undertook to mitigate drought included providing water by drilling water points and rehabilitating existing ones. The ministry also translocated game from severely hit parks to those that had fair vegetation.

Muyunda said the ministry would at the end of November also assess its drought strategic management plan to weigh its achievements and challenges experienced during the implementation.