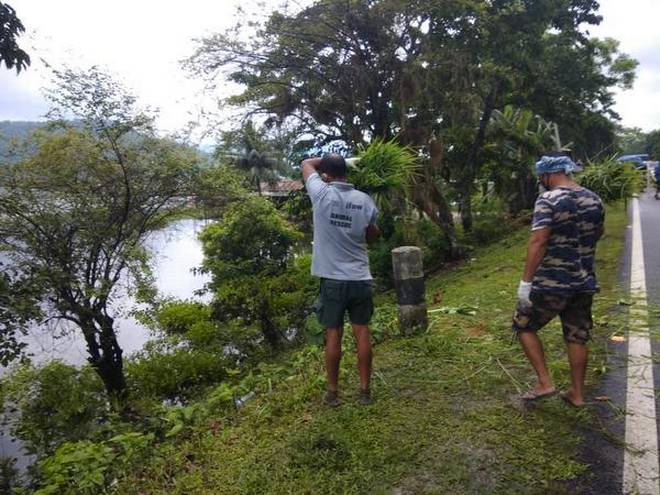 Rhino rescue workers with jaggery (unrefined sugar) and multivitamin wrapped in a bundle of grass. (Original photo as published by The Hindu.)

All rhinos have poor eyesight. Some, like the one that has made a highway beside the Kaziranga National Park and Tiger Reserve (KNPTR) its temporary home, have even poorer vision.

The male rhino, about 30 years old, was thought to be ill or injured when he swam laboriously out of the flooded KNPTR, hauled himself onto the highway and lay on the asphalt on the evening of July 17. Barring the twitching of the ears, he was motionless as vehicles whizzed past.

He has refused to budge three days later, earning the ‘road rhino’ moniker. But he has been venturing out a few feet on either side of the highway after some doses of sweetened multivitamin were given in bundles of grass and antibiotic eye drop sprayed from a high-pressure water gun.

The rhino had emerged from the Bagori Range of the 1,055 sq km KNPTR that has a core area of 430 sq km and more than 55% of the world’s population of the one-horned herbivore.

“Our men threw a security cordon around the rhino. From experience, we knew the rhino was really tired after swimming for hours in search of dry land, but we sought the help of veterinarians nonetheless,” said P. Sivakumar, KNPTR director.

A team of veterinarians led by Shamsul Ali of the Centre for Wildlife Rehabilitation and Conservation (CWRC) nearby began observing the animal. The “crisis situation” prompted Kushal Konwar Sarma, head of College of Veterinary Science, to rush from Guwahati, 200 km away.

“We were prepared to take the rhino to the zoo in Guwahati, but he was in good health other than suffering from partial vision. We could sense he was not confident enough to swim back probably because of uncertainty in figuring out what lies ahead although he has been venturing further from the road with the water level receding,” Dr. Sarma said.

Dr. Ali said his team embedded multivitamin pills in jaggery wrapped in bundles of grass and threw them from a distance. As the animal lay on the road on Saturday, they sprayed the eye drop mixed in saline water from five metres.

“Rhinos have blurred vision and tend to attack based on smell and hearing. We had an animal too weak to react and with corneal opacity in the left eye and conjunctivitis in the right,” he told The Hindu on Sunday. Rathin Barman, who heads the CWRC, said the rhino was expected to melt into the forest soon.

The ‘road rhino’ has been hanging around the Bandardubi area under KNPTR’s Bagori Range. This area was freed of encroachment four years ago but handed over by the State’s Revenue Department to the Forest Department about a month ago.

Bandardubi is one of the nine animal corridors within the eco-sensitive zone of KNPTR. The corridors as well as the zone await notification, pushed for a year ago.

Nine of the 106 animals that have died so far due to flood in KNPTR are rhinos. About 85% of the park is under water but officials say the situation could worsen as the Brahmaputra has been rising upstream.