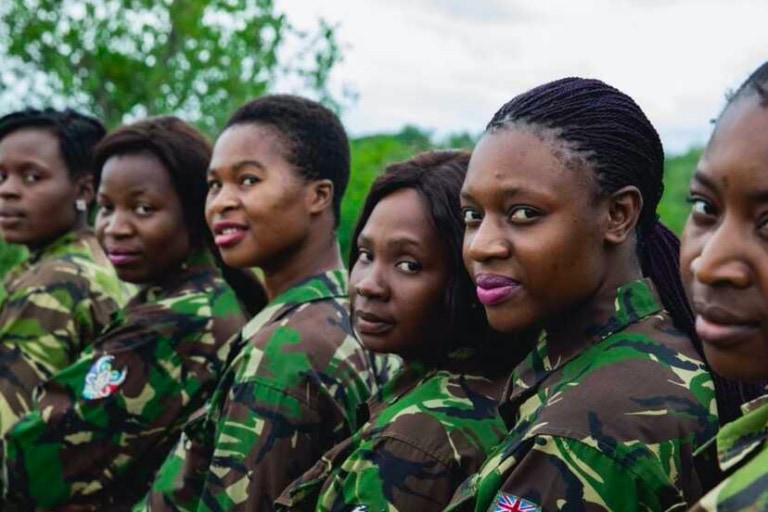 The Black Mambas are an all female anti-poaching unit in South Africa. Image: Black Mambas APU/As originally published on Mongabay.

This week the United Nations General Assembly is expected to formally adopt its fifth Resolution on Tackling Illicit Trafficking in Wildlife. One might be forgiven for asking “another resolution – so what?” But for the first time ever in any IWT-related policy outcome, the new UNGA resolution brings gender into IWT thinking and responses.

By adopting this resolution, Member States have committed to:

“ensure the full and effective participation and equal opportunities for leadership of women in the development and implementation of relevant policies and programs addressing illicit wildlife trafficking, and [the General Assembly] further calls upon UN agencies to continue ensuring systematic gender mainstreaming into all policies and programs of the UN system.”

This is a welcome and long-overdue step forward towards integrating gender into IWT thinking, and hopefully a sign that States are becoming more gender responsive.

This is important for many reasons. The social and economic structures that promote gender equality – inclusive decision-making and participation, recognizing the positive effects of diversity, an engaged and empowered citizenry, acknowledgement of universal human rights – are also prerequisites for environmental sustainability. Yet, despite gender equality being a foundational principle of the 2030 Sustainable Development Agenda, a fundamental human right, and a necessary foundation for a peaceful, prosperous and sustainable world (SDG 5), gender-blindness remains pervasive across multiple sectors, and the conservation sector and counter-IWT efforts are no exception.

There are heavy consequences to gender blindness: it creates huge gaps in understanding real-world IWT activities, processes, and opportunities for intervention.

“Overlooking gender dynamics in IWT and the knowledge, experience and unique perspective of half the population, affects the potential for sustainable conservation outcomes. Essentially, programs that overlook gender, look at only half of the issue and propose only half the solution.”

And yet, IWT responses have been out of the loop for decades.

A significant challenge for mainstreaming gender into IWT responses lies in understanding how gender and IWT intersect, compounded by the lack of gender-specific IWT research: counter-IWT practitioners who may be gender-curious are faced with a daunting task: ‘how do I even start to think about gender in the context of IWT … what does it even mean?’.

“Gender” is not just about women, but about the socially-constructed perceptions and norms that define the roles of both women and men in a certain time and place.  For example, in relation to poaching, gender norms often discourage or prohibit women from hunting, whereas they encourage men to do so. In fact, so-called masculinity-shaming is known to be used to bully men into poaching both for profit and for subsistence needs.

A striking example of gender-skewness in IWT is the observation that women represent only an estimated 3-11% of the global ranger workforce despite available evidence strongly suggesting that greater gender equality would bring improved relationships with communities, de-escalate violence, reduce the risks of gender-based violence, and result in better community engagement and nature conservation all round.

WWF’s recent report ‘Gender and Illegal Wildlife Trade: overlooked and underestimated’ presents stark findings: by being blind to gender dynamics, we risk perpetuating gender inequality, for example by not realizing that where conservation rules restrict access to certain areas, such restrictions can disproportionately burden women, responsible for collecting firewood, water and other natural resources. Entrenched gender norms perpetuate inequalities, which can lead to greater financial vulnerability, in turn increasing the risks of gender-based violence: near one national park in Zambia, restricted livelihood opportunities requires some women to provide accommodation – and sex – to seasonal poachers; shame and secrecy protect the poacher’s identity and the woman’s reputation. Gender inequalities and gender-based violence can occur at multiple points along the illegal wildlife value chain; sexual exploitation facilitates personal and commercial IWT transactions on local to global scales.

The report notes that counter-IWT projects generally fail to take gender into consideration, oblivious to the fact that because IWT takes place in a world defined by gender differentiation, the actors, practices, impacts, pressures, and outcomes of IWT – as well as responses to eradicate it – are ‘gendered’ too. To change the status quo, the report provides a practical “gender toolkit” to help practitioners better understand, integrate and respond to gender dynamics along the entire IWT value chain, by sharing insights, videos, examples, and a series of self-assessment checklists.

Admittedly, there is still a lot we don’t know yet about gender and IWT and mainstreaming gender into programs and policies is neither easy nor a magic wand. But we have a more enabling environment to steer more gender-responsive IWT projects: a win-win for gender equality, human rights and conservation.