By NewsroomFebruary 13, 2020Anti-poaching, Conservation, Education, Science and technology
No Comments

The solar-powered technology is helping to protect Kruger National Park’s rhinos from poachers, and the country’s tourism industry as a result. The network can distinguish between human and animal movement and even includes an infrared sensor, so it can spot poachers at night and alert park rangers to their presence.

Standing almost 12-feet tall, the system is known as “Postcode Meerkat,” after the source of its funding — European postcode lotteries — and the meerkats of southern Africa, who live in family groups protected by one of their own standing on its hind legs and watching for predators.

The Economic Value of Kruger

In 2018, 15 million people visited South Africa, spending around $8 billion. According to a 2018 paper from the University of Zululand, Kruger received an estimated 1.8 million visitors in the 2016-2017 fiscal year, a number that is predicted to double by 2029. Along with buffalo, elephants, lions and leopards, rhinos are part of the “Big Five” safari animals and a big draw for tourists.

“These parks are a huge revenue generator for South Africa,” said Tumelo Matjekane, from Peace Parks Foundation, an organization working to connect conservation areas in southern Africa. “They attract tourists from all over the world. If we are not able to conserve that, those people will not come here and the impact of that on livelihoods, in the communities around the parks, and our economy — it’s not measurable,” he added.

Rhino horn is prized in some Asian countries as a sign of wealth, and mistakenly believed to have medicinal properties. Poaching to meet consumer demand means black rhinos are critically endangered and white rhinos are classified as near threatened. 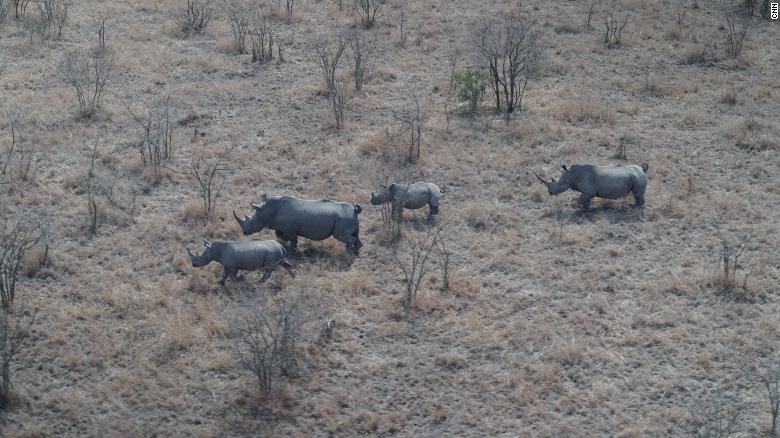 “Kruger is … roughly the size of Wales,” said Mark McGill, chief technology officer for South African National Parks. “It’s difficult to find a person out there … and apprehend them.”

“Postcode Meerkat” is making a difference, however. Launched in 2016, it was developed and manufactured by South Africa’s Council for Scientific and Industrial Research (CSIR), South African National Parks, and Peace Parks Foundation.

According to Peace Parks’ website, in the first 21 months of use there was an 80% decrease in poaching incidents in areas where it was deployed. The technology is portable, meaning it can be moved to poaching hotspots, and there are plans to install it at more sites around the park.

“We’ve seen the figures that it is actually working,” said Charles Petzer, a CSIR engineer who worked on the technology. “If you look at the amount of square kilometers that you can do surveillance on, it is definitely the most cost-effective solution.”

“It can’t replace people,” Petzer added. “But it can make it much easier for people to do their job.”