A “Team Earth” where treasure is measured not in gold, but the wellbeing of people and nature.

By Peter BorchertSeptember 16, 2020Editorial
No Comments 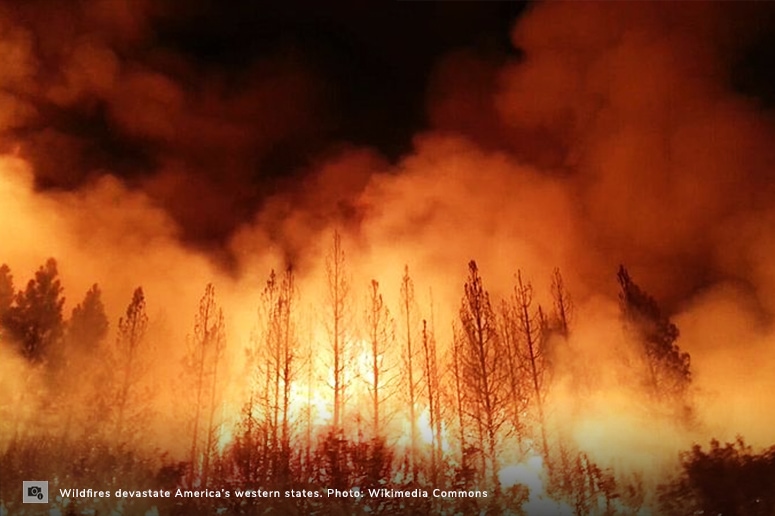 The trouble with Donald Trump is that even when he is right, he completely misses the irony in being right for the wrong reason. Take the wildfires ravaging the United States’ western seaboard, for example.

Yesterday, Airforce One negotiated a careful descent through pinkish-grey, fire-fueled clouds into Sacramento McClellan Airport. It rolled to a stop and disgorged its passenger into the smoky world of California. And he lost no time telling the waiting audience that the agony being felt by millions of Americans across California, Oregon, and Idaho resulted, not from climate change, but poor forest management.

“When trees fall down after a short period of time, they become very dry—really like a matchstick,” Trump explained. “And they can explode. Also leaves. When you have dried leaves on the ground, it’s just fuel for the fires.”

Yes, Mr. President, but these are no ordinary fires. More than five million acres of American real estate have been razed. This month California passed the record for the worst year in history for the amount of land damaged by fire. At one time, the first, third, and fourth-largest fires in California’s history were burning simultaneously. And yes, it does all boil down to poor forest management. But you are wrong in that it isn’t the fault of sloppy foresters as you insinuate. This unfolding tragedy is the fault of sloppy, negligent management at the highest level in the land, your own presidential office. Over the past four years, you have relentlessly rolled back good environmental laws and regulations, making it harder and harder, impossible in fact, for those charged with protecting the environment to do their jobs.

When it comes to climate change, you brush aside what is happening with a dismissive, “I don’t think science knows.” Science has yet to reveal the full extent of the universe’s secrets, but it damn well does know that we are getting it wrong here on Planet Earth and that we are heading down a very scary path. The signs are everywhere, including right in front of your smarting, smoke-filled eyes. In fact, any half-aware human being doesn’t even need science to know that the world is changing and that our collective actions are implicit in the slippery slope upon which we find ourselves.

Of course, you alone are not responsible for the altering, erratic climate patterns that have been escalating in recent decades. But you are, as things stand, the leader of what is probably still the most powerful nation in the world. And for you to not only challenge but also denigrate the decades-long accumulation of warnings by scientists around the world is nothing short of criminal.

Climate change is but one manifestation of the environmental crisis we face. Declining biodiversity is another. Way back in 1989, the renowned polymath Jared Diamond warned of overhunting, the effects of introduced species, habitat destruction, and “secondary ripple effects” as the main mechanisms of accelerating human-caused extinctions. “The basic reason,” he said, “is that there are now more humans than ever before, armed with more potent destructive technology, and encroaching on the world’s most species-rich habitats: the continental tropical rainforests.”

In 2011, the ecologist Corey Bradshaw suggested an augmentation of Diamond’s “Evil Quartet.” He added a “fifth ghoul”—human interference with the global climate system resulting in accelerating the planet’s warming. “A clear lesson from the past,” he wrote, “is that the faster and more severe the rate of global change, the more devastating the biological consequences.”

To this, Bradshaw added another factor—what he and colleagues refer to as “extinction synergies.” These are all the extra problems lumped on the shoulders of species trying their best to shift and adapt to a rapidly altering world. Human-modified landscapes, for example, and habitat changes, which might be more favorable to invasive species than the native inhabitants. Clearly, we can no longer look at the conservation of species in separated silos, as the causes of biodiversity loss are difficult, if not impossible, to isolate. As Bradshaw says: “These synergies thus represent a situation where the combined effects are substantially more problematic for biodiversity than the mere sum of their individual effects.” We have to embrace strategies that approach the problem systemically.

Now, as we approach the end of 2020, the “Evil Sextet” continue to wreak their havoc, with our pervasive ‘take now, think later’ mentality cheering on from the sidelines. And yet again, we are warned that our profligate ways cannot continue.

WWF’s latest Living Planet Report reminds us that nature is declining globally at rates unprecedented in millions of years. Humanity’s increasing destruction of the natural world is having a catastrophic impact not only on wildlife populations but also on human health and all aspects of our lives. “The way we produce and consume food and energy, and the blatant disregard for the environment entrenched in our current economic model, has pushed the natural world to its limits,” it scolds.

The report pushes for a massive shift in the way we live. And the agenda is broad, quite rightly embracing human rights and moral philosophy, as well as sustainable finance and business innovation.

But to do this, we need leadership. Not the bullying, callous, and self-serving kind personified in Trump, Bolsonaro, Putin, Modi, and the many other “big men” who ape them, but real leadership. We need to elect women and men with vision who will help their citizens set aside national, regional, racist, and religious prejudices. Honest, compassionate people working towards a world order where everyone has enough food, shelter, water, and opportunity. We need a world where a United Nations means just that—a “Team Earth” where treasure is measured not in gold, but the wellbeing of people and nature.