By Peter BorchertApril 26, 2020Anti-poaching
No Comments

NORTH-WEST, NAMIBIA: In an ongoing partnership with Save the Rhino Trust Namibia (SRT) and the Ministry of Environment and Tourism (MET), Wilderness Safaris is proud to report the success of their most recent entirely airborne anti-poaching operation, forming part of a campaign launched last year. Involving two helicopters and a fixed-wing aircraft, the aim of the campaign is to monitor, dehorn and protect black rhino in north-west Namibia. Funded partly by Wilderness Safaris’ Sustainability Fund, the recent operation saw close to 50 rhinos dehorned in order to deter poachers, as well various other veterinary services carried out in the local villages. 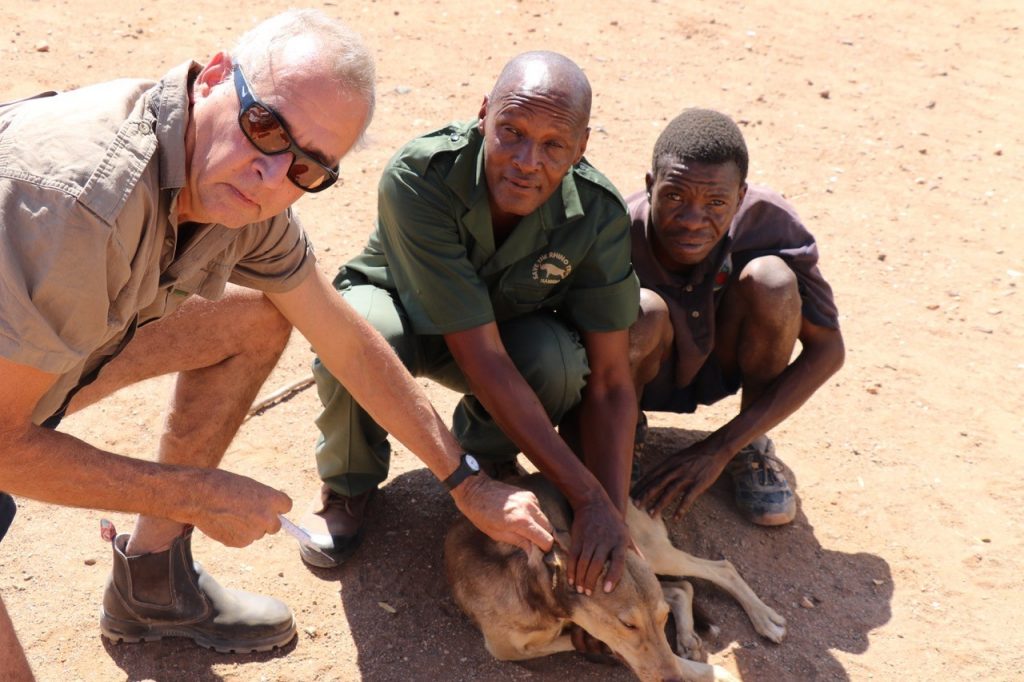 “When I say entirely airborne, there were no ground-based vehicles for the aircraft involved – but we did have boots on the ground, and the men wearing them were critical to the operation. These are the trackers from SRT, whose tireless efforts provide the information that dictates our operations, and are at the very core of our collective achievements to date”, notes Dr Conrad Brain, Wilderness Safaris Namibia Environmental Scientist, Pilot and Veterinarian.

It is for this reason that at the end of the operations last year, which showed extremely positive results for rhino, that Conrad agreed this year to assist the SRT trackers with the veterinary care they needed for their pets back home; due to the remote location of their villages, there is no veterinary access or care readily available.

“Through the Wilderness Safaris Sustainability Fund, I was able to secure funding to obtain vaccines, medicines and professional time to act on this situation.  We were therefore able to fly, immobilise, dehorn and treat rhino during the day, in probably the most rugged terrain on Earth where rhino exist, and then afterwards, I would load my black bag onto the back of a Land Cruiser and head off to the villages”, Conrad adds.

Conrad relished the interaction with the families, talking to them about the efforts to protect the rhinos – of which they are a vital part – and letting them know how he would help their dogs. “However, nothing was more fun than getting to know the dogs, with names to match their personalities:  Meisie, Probleem, Bliksem, Damarakind, Voetsak, Bill Clinton, President, The Rock, Ford Ranger, Blompot and of course Wagter – and many more”.

This was just the beginning, and the team is planning on returning to assist with setting up a mobile clinic in one of the villages to enable Conrad to do the surgical work that is now required for many of the animals. “It is a privilege to help our local communities and to reiterate the important connection between communities, ecotourism and conservation – their support and understanding of conservation is of vital importance for the future protection of our wilderness areas, and the survival of the rhino”, he says.

The success of this operation forms part of a unique conservation partnership that has spanned more than a decade. The ongoing surveys and patrols have given the conservation team the opportunity to not only document and closely observe Namibia’s wildlife populations, but have enormously contributed to the dramatic drop in rhino poaching in these protected areas over the past few years.

“Over time, the results from such surveys increase in value as, not only do we get immediate results, but more importantly, they become a continuous and reliable source of information that can be used to indicate trends in wildlife populations. This will also help us set the course for future management and environmental conservation. With the increased value placed on our wildlife and natural environment, comes the ever-pressing need for us to improve our methods of monitoring and to adapt our conservation approach accordingly. This will remain a priority for our conservation team at Wilderness Safaris and with our partners in conservation”, Conrad concludes.