By NewsroomDecember 7, 2021Anti-poaching, Tourism
No Comments 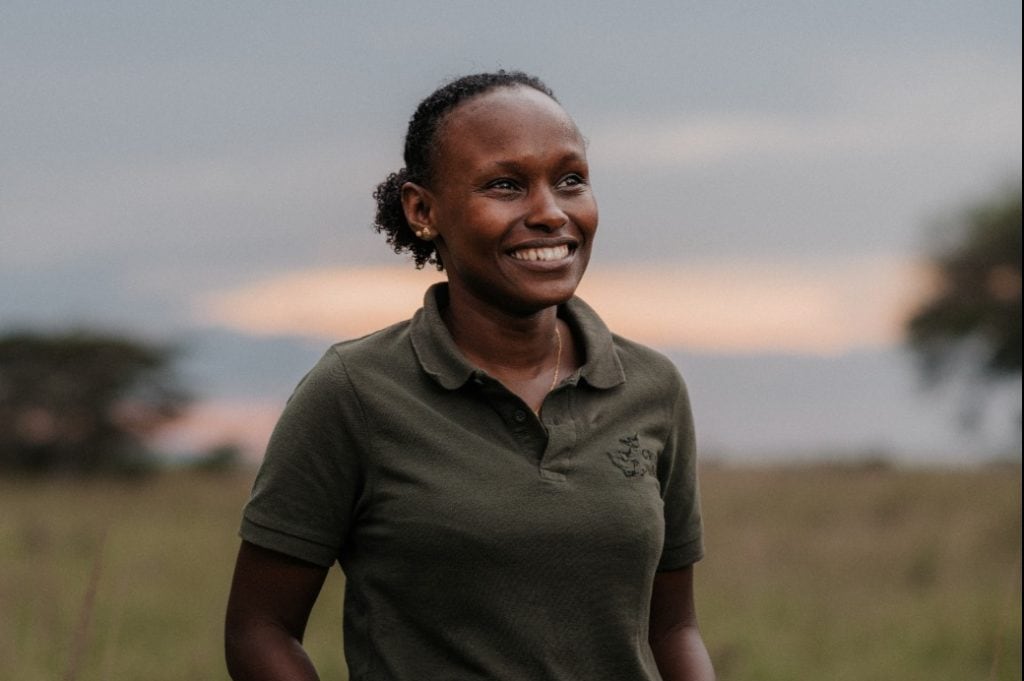 Alina Peter pictured above. Image: As originally published by Skift.

The pandemic has had a catastrophic effect on African nations on many levels. As vaccine equality debates and larger political concerns escalate, significant challenges on the ground are escalating, too, related to containing poaching and the illegal animal trade.

Simply put, when Covid curtails tourism, jobs disappear and the poaching of wildlife for profit accelerates. Due to the lucrative nature of the trade, poaching for everything from rhino tusks and pangolin to simple bushmeat has always existed, but it is accelerating at an alarming rate.

On the frontlines of the battle is Alina Peter. She’s the anti-poaching operations room coordinator at the Grumeti Reserve in Tanzania. The non-profit Grumeti Fund carries out wildlife conservation and community development programs in and around the Singita Grumeti Reserve. Here, she works with a dedicated team of staff, including 100 highly trained anti-poaching scouts, who come from the local communities bordering the concession.

Peter came into conservation from a purely technical background: “I earned both my bachelor and masters’ degrees in Information Communication Technology, she said. “When I took up my current role in 2017, I did not know it would be so immersed in conservation; that turned out to be my best career decision yet.”

Peter begins her days in the Serengeti by leading by example: she does a rigorous CrossFit session at sunrise with the scout team, working through burpees, deadlifts, pull-ups and a particularly arduous hill run that gets the lungs heaving. Then, she checks into the anti-poaching headquarters. “My workdays are pretty random,” she said. “Some days are more eventful than others. However, I would start by cross-checking data input in our spatial platform — EarthRanger (ER), extracting data for reporting purposes and over-seeing my team’s daily activities. While on an eventful day, I’ll be coordinating live operations via ER or out in the field inspecting different communication infrastructures that support our operations.”

While in the field, the mission could include tending to a baby elephant that has caught its foot in a poaching snare. The snares, made of wire, don’t discriminate. While they are normally intended to capture bushmeat, any animal in the Serengeti can become a victim to them, including endangered animals.

Peter suggests that the decline in tourism in Covid represents a severe threat to wildlife. “Tourism is a natural preventative measure since poachers would not go where tourists go reducing their risk of being seen; with the tourism collapse overnight, poaching spiked because poachers had freedom of movement,” she added. In addition, “redundancy of scouts added to the already high unemployment in the surrounding communities, and the reduced numbers of the boots-on-ground allowed more incursions to happen.” Unemployment in surrounding areas meant many people reverted to illegal poaching, going from a steady job back into the illicit and highly destructive trade.

Her work with the team, including former British military commando Wes Gold and a group of trained conservationists, is among the most technically sophisticated in the region. The group blends old-school intelligence gathering and setting up networks to understand poacher movements, to the use of highly trained dogs, night vision, and also modern technology focused on tracking.

“Technology plays a central role in anti-poaching. It is an invaluable tool that enables us to be proactive, ensure timely response to incidents, and ensure that our scouts, to a higher degree, have the backing and support to operate safely and effectively,” she said. Half of the battle is knowing what to do with a limited amount of resources. Though well capitalized compared to other programs, the Grumeti team needs to make well-informed strategic decisions on where and how to use limited resources. Peter suggested that the technology helps to highlight priority areas needing immediate intervention.

Grumeti has come a long way. Nearly 20 years ago, the plains were barren and wildlife had been destroyed. But through a hybrid of hospitality, enlightened philanthropy from American financier Paul Tudor Jones, and anti-poaching experts like Peter, the mammoth area has been slowly been rehabilitated. But management and law enforcement can only go so far. It is truly an existential crisis that gets worse with every passing day of the pandemic, and is not helped when a travel ban is heaped on during one of the peak travel seasons.

Peter warns that poachers are becoming much more sophisticated in terms of their tactics and intelligence networks. And have many more people to recruit into their efforts. The commercialization, and demand from places like China, have lead the trade to transcend subsistence into something commercialized and professional.

Yet Peter and the team remain upbeat, continuing their grueling sunrise training and holistic approach. “It is important to interweave the science, indigenous knowledge, and technical expertise to attain impactful conservation outcomes,” said Peter. And while their work may not always show up in global headlines, the world should be thankful for the humility, dedication, and vital conservation work conducted by Peter and the entire team.