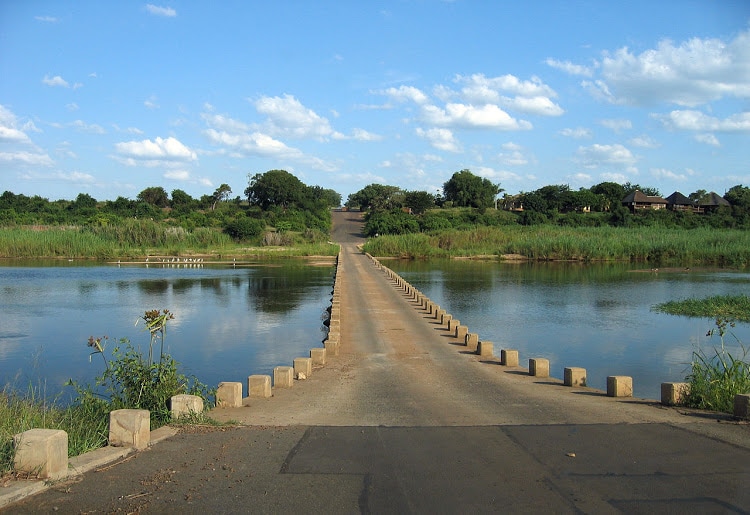 A low-water bridge over the Crocodile River in Kruger National Park. There are fears that a proposed opencast coal mine upstream from here threatens to pollute the river. Image: Wikimedia Commons.

A protracted fight between a prospective coal miner and communities and farmers at the edge of the Kruger National Park trying to keep the company out shows no sign of easing.

Last week, civil rights group AfriForum lodged a fraud complaint at the Komatipoort police station on the grounds that a previous environmental impact assessment (EIA), submitted by the coal miner’s environmental consultant, had been plagiarised from an assessment done for another mine in Limpopo.

This follows the mineral resources department’s recent decision to allow Tenbosch Mining to appeal an early decision blocking it from developing the mine.

“The documentation that was laid before the minister is being investigated for fraud,” said Lambert de Klerk, AfriForum’s head of environment.

De Klerk said he was concerned that the charge against the environmental consultant had not been considered when the department decided to grant the appeal.

The move is the latest shot fired in the war between the mining company and a group of farmers, game lodge owners and local residents, who say the proposed mine threatens a critical biodiversity area within the buffer zone of the Kruger National Park.

The mine would be 10km from Kruger’s closest fence and inside the buffer zone where mining and industrial activity is severely restricted.

“We are very conscious about protecting people from chemicals in food and in the environment,” he said, adding that the proposed mine would adjoin his farm.

“That dust would contain chemicals because they’re minerals,” he said. “Any kind of dust is pollution for us.”

Even the gravel roads on the farm are treated by wetting them to ensure that no dust lands on the banana plants, he said.

It was also critical to protect groundwater from pollution. “As soon as you start mining you start messing around with underground water,” he said.

The mine was “totally unacceptable” in one of SA’s “breadbaskets”, he added.

The farm employs about 1,000 people, while the mine would probably only employ a few dozen people, he added.

Attorney Jacques du Randt, who is representing Ngwenya Lodge, a private game conservancy opposed to the mine, said the owners were also concerned that if the mine went ahead, other mining operations would follow, deterring tourists from visiting the area.

Residents at nearby Marloth Park are also pushing back against the mine. “This is an environmental issue,” said Cindy Benson, head of the Marloth Park ratepayers’ association.

“We’ve seen what happens with mining. We drive through Witbank and Middelburg and see what’s happened to them. Rehabilitation just does not happen,” she said.

She claimed that no proper study of the area’s wildlife and birdlife had been carried out.

The expected increase in heavy trucks on the busy N4 toll road that links the Lowveld with Gauteng and Maputo was also an issue “Already those roads are in a horrific state,” she said. “If you could see what happens over weekends and Easter long weekends, it is a nightmare.”

The dispute dates back to September 2018, when mining company Manzolwandle Investments was granted mining rights to 18,000ha of land spanning portions of three farms.

Du Randt noted that the acceptance letter did not mean the applicants could begin mining.

“It simply means they can now begin with all legal requirements that must be submitted to the mineral resources department (DMR), such as basic assessment reports (BAR) for environmental impact and public participation,” he said.

“We have proof that they plagiarised the assessment from another company,” claimed De Klerk.

The EIA allegedly matches other EIA reports word for word.

These allegations resulted in Singo withdrawing from the project, said De Klerk.

The mining company then appointed Limp Earth and Environmental, another consultancy firm, to conduct the basic area report which it then sent to the mineral resources department.

Limp Earth and Environmental director Tshifhiwa Netsianda said it would be unfair for him to comment on whether Singo’s report had been plagiarised.

“Get information from Singo,” he told Sunday Times Daily.

Netsianda pointed out that he was only preparing a basic assessment report which would allow the company to secure the mining permit and not a full environmental impact study.

In the meantime, Manzolwandle Investments had been taken over by Tenbosch Mining which continued to seek permission to develop the mine.

On October 28 last year the department turned down the mining application on the grounds that the public participation process was flawed, and that various critical elements such as rehabilitation plans and specialist studies concerning the environmental sensitivity of the area had not been submitted with the report.

The department, however, gave the company leave to appeal, which would allow the environment minister to review the matter and make a decision.

“The minister decided early this year that the company was within its rights and DMR has to reconsider its decision to cancel the permit application,” said De Klerk.

The appeal process required that all interested in affected parties be notified, but they say the first they heard that the appeal had been granted was when they were notified of a public participation meeting to be held on May 13.

Netsianda said no-one is called to a public participation, but that they are notified.

“I think you should know that people at Marloth Park and Ngwenya Lodge are the ones who sent out notices to people immediately after they read the notice in the newspaper,” he said.

He claimed that concerned owners had also circulated an objection form to some people who were not aware of what was going on.

“I have received the calls from guests of Ngwenya Lodge asking me what to complete in the objection form,” he said. “Me, as a consultant.”

All the correspondence received was copied to Ngwenya Lodge or to the Marloth Park ratepayers’ association, he said.

De Klerk stressed that AfriForum’s complaint was not against Limp Earth, who have taken over from Singo Consulting, though he noted that the new company has the original report.

“They [Limp Earth] say they have gone through the report and also made changes but we have not seen anything from them yet,” he said.

“This is what I am striving for, that concerns and issues are put forward, recorded and response given where appropriate,” he said.

Tenbosch Mining did not reply to a written request for comment.