By NewsroomApril 28, 2020Science and technology
No Comments

Scientists have closely examined and compared intriguing rock drawings on the Ukok plateau in Russia’s Altai Republic and Baga-Oygur, and Tsagaan-Salaa in northwestern Mongolia.

The petroglyphs are now in different countries but in fact are only about 20 kilometres part.

The drawings were mostly found in the 1990s and early 2000s but many questions at the time remained unanswered. 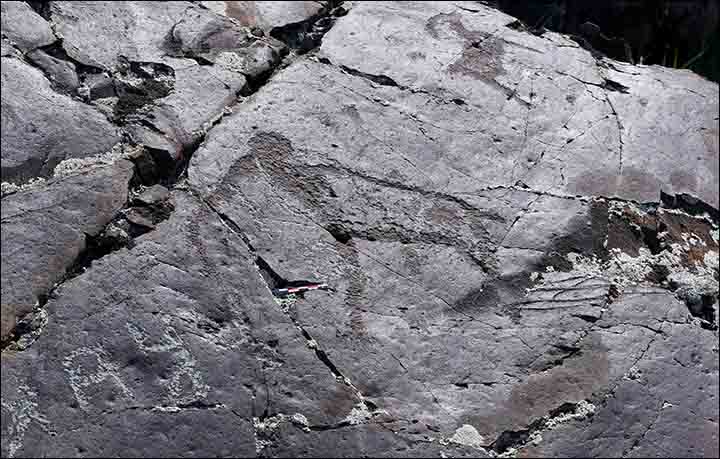 In particular there was a dispute between experts as to whether the drawings showed extinct woolly mammoths that one roamed these parts – or fantastical creatures with trunks.

A new study by Russian and French researchers found new petroglyphs which helped the answer this conundrum.

For example, at Baga-Oygur II was found the image of a long-gone woolly rhino.

Most of the image is lost due to a rock slicing, but the animal is quite recognisable with an elongated, squat torso, short powerful legs, a characteristic tail, and an elongated muzzle with exaggeratedly enlarged two horns.

This was useful because these animals – like mammoths – became extinct around 15,000 years ago in this region, making the drawings the work of Palaeolithic artists.

The scientists also concluded that the artists worked with stone implements, and not metal.

They also noted a ‘desert varnish’ on the stones – a dark crust which forms on the stones in dry conditions, suggesting a greater age than earlier assumptions of between 8,000 and 10,000 years old.

Stylistic similarities between the Mongolian and Siberian petroglyphs further indicated the Ukok drawings to be woolly mammoths.

They made their petroglyphs in the so-called Kalgutinsky style.

The experts concluded: ‘We attribute the petroglyphs to the Final Upper Palaeolithic because the examples with typical features of this style depict the Pleistocene fauna (mammoths, rhinoceros).

‘These stylistic features find their parallels among the typical examples of the Upper Palaeolithic rock art of Europe.’

Russian scientists Vyacheslav Molodin said: ‘This is a new touch to what we know about the irrational activities of ancient people in Central Asia.

‘This is the famous series of sculptures in Malta in Irkutsk region, whose age is from 23,000 to 19,000 years ago, and several examples from Angara.

‘The assumption that the Pleistocene inhabitants undertook rock art on open surfaces fits into this context.’

The research was undertaken by Vyacheslav Molodin, Dmitry Cheremisin and Dr Lidia Zotkina from the Institute of Archaeology and Ethnography, Novosibirsk, part of the Siberian Branch of the Russian Academy of Sciences, Jean-Michele Geneste (University of Bordeaux) and Catherine Cretin (National Museum of Prehistory, France).

Their article ‘The Kalgutinsky Style in the Rock Art of Central Asia’ was published in late 2019, in the magazine Archaeology, Ethnology & Anthropology of Eurasia (issued by Institute of Archaeology and Ethnography SB RAS).