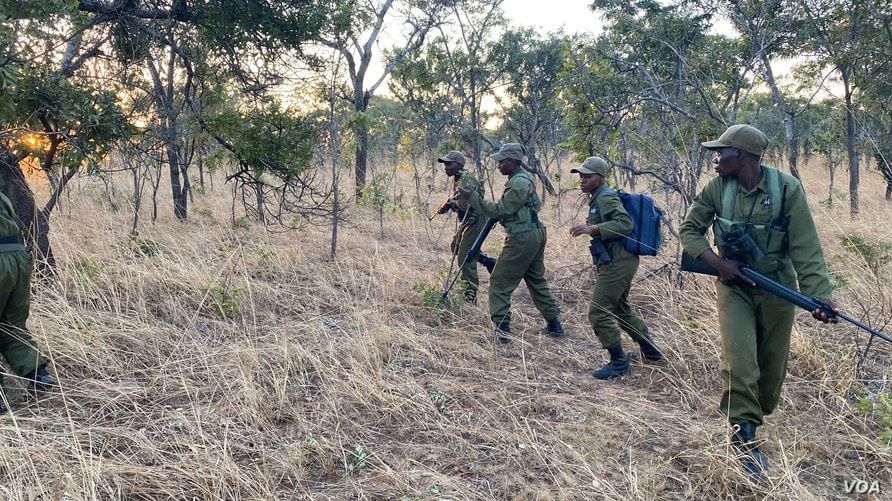 International Anti-Poaching Foundation rangers on a drill near Mana Pools National Park, about 300 kilometres north of Harare. Image: As originally published by VOA

The impact of the pandemic has increased wildlife poaching around Zimbabwe’s national parks, as people who lost their jobs hunt the animals for food.  To help protect the animals, anti-poaching organizations have been formed, including a squad of vegan, women rangers.

Those are recruits of the International Anti-Poaching Foundation on a drill near Mana Pools National Park, about 300 kilometres north of Harare.

Nyaradzo Auxillia Hoto has been part of this group, known as Akashinga, the Brave Ones, since it started in 2017 to fight poaching here. The 29-year-old Hoto says she does not fear poachers or wildlife.

“I am not even afraid. At first, yeah, I was a bit afraid. But now we have been taught on animal behaviour and also because of time I have spent in the bush now I have experience of how to handle animals. Whenever I experience even a lion, I won’t be scared. But I would like to study more and to know more about the animals, especially the one I am protecting,” she said.

The women are well-armed, and if they encounter poachers, they detain them, and turn them over to police for prosecution.

Damien Mander, an Australian national and an Iraq war veteran, formed the Akashinga project. He says anti-poaching patrols will help preserve Africa’s wildlife, which has been under steady assault from poachers for decades.

“It was a trial in the beginning on one reserve in northern Zimbabwe, we started with 16 women protecting 90,000 acres.  We now got 240 staff as part of this program. We now have eight reserves that we patrol. We are on target to have 1,000 staff by 2026,” he said.

Tinashe Farawo, spokesman of the Zimbabwe Parks and Wildlife Management Authority, says the efforts of such conservation groups are helping to fight poaching in this wildlife-rich country.

“These people have been provided the much-needed resources like patrol, in terms of anti-poaching law enforcement. The same partners some give us vehicles for patrol, some give us fuel, so that we are visible on the ground, our law enforcement is always intact, our rangers are always equipped. Those are some of the problems we always face: that our national parks are in extreme weather conditions. So they need tents, sleeping bags, uniforms, boots. All those things if you put them together it means we can do wonders. Because of these activities and partnerships, we are visible on the ground and less of poaching incidences are recorded in our national parks,” said Farawo.

With more rangers coming on board, Zimbabwe hopes to eliminate poaching in its entirety, and ensure the safety of wildlife roaming the national parks.