By NewsroomJanuary 30, 2020Uncategorized
No Comments

DURBAN: Two men suspected of dealing in rhino horns and elephant tusks worth an estimated R300,000 on Tuesday appeared in the Durban Regional Court.

Vusi Mkhonza and Petros Mkhize were arrested on Monday following a sting operation. 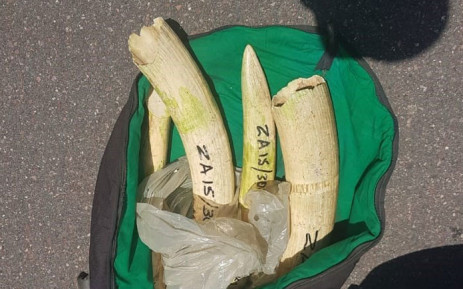 Original photo as published by EWN: Some of the ivory confiscated by police. Picture: @SAPoliceService/Twitter

Police spokesperson Jay Naicker said they acted on a tip-off.

“An appointment was set up to meet yesterday outside a busy hotel in Point in the Durban area. A police officer from Point SAPS proceeded to the said location and requested to see the product. Without hesitation, the suspects led the undercover police officer to their vehicle.

“The men were stunned and they knew it was all over for them when they were confronted by police officers from the Point Rapid Response Team together with the Endangered Species Unit,” he said.

Mkhonza and Mkhize were remanded in custody until Monday as investigations continued.