An inside look at Zimbabwe’s all-female, anti-poaching army

By NewsroomAugust 19, 2020Anti-poaching
No Comments 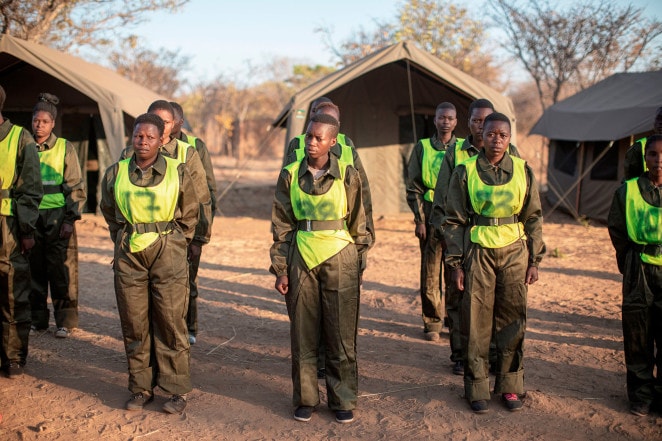 In “Akashinga: The Brave Ones,” the film shows how the quasi-military unit patrols five former trophy hunting reserves, protecting elephants, lions, and rhino from hunters, snares and cyanide traps. Original photo as published by The New Zimbabwe.

Illegal poaching of Africa’s wildlife has skyrocketed during the coronavirus, but one radical, all-female team in Zimbabwe is fighting back.

The Akashinga unit is the focus of a new short documentary on National Geographic produced by Canadian filmmaker and explorer James Cameron.

Many of the women are survivors of domestic abuse or sexual assault — and they are finding solace, strength and even a financial future in the group.

“As a woman, I was focused on using Akashinga as a tool to fight my battle for a better life,” Petronella Chigumbura, a divorced mother from Zimbabwe’s Mashonaland West Province, told Elle.com.

“I can now feed my kids and pay school fees for them. I acquired a driver’s license (and) I am also building a big house for my children. Now I have the pride of having my own future.”

But the job can be deadly – more than 1,000 rangers have been killed across Africa in the past decade.

Chigumbura once arrested a poacher who was “not complying and noted: “He was very resistant. It was difficult for us to guess what he was thinking about us because he had a very sharp spear and a big knife.”

And sometimes the arrests strike close to home.

“I once had to arrest one of my relatives,” Chigumbura said. “I had no option but to arrest them, because it’s my top priority to save wildlife. If we don’t catch [poachers], nothing will be left for the next generation.”

Nyaradzo Auxillia Hoto, who joined Akashinga after escaping an abusive marriage, added: “During patrols, it’s very hard to know what the poachers will be thinking, especially when we’re tracking them.”

But the women aren’t just on the lookout for poachers. They’re also watching for wildlife that might be dangerous.

“One day, we came across a lion just 10 meters [almost 33 feet] away,” Hoto said. “It was my first time meeting a lion that close.”

Still, both women have come to love and appreciate the creatures they help save.

“Animals were afraid of us when we first started to protect them,” Hoto told the magazine. “They only thought of being shot… Now the animals feel secure and we have a strong bond with them. We are like family.”