By NewsroomOctober 8, 2021Science and technology, Wildlife Crime
No Comments 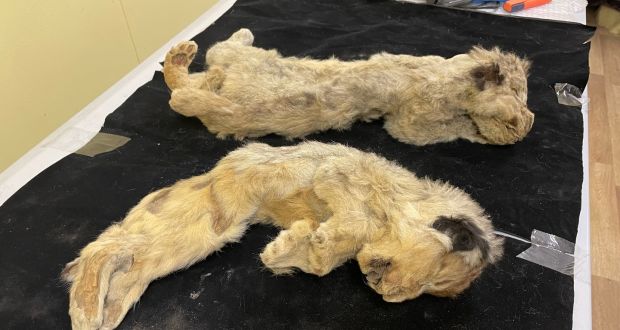 Blasted from their permafrost graves by men hunting mammoth tusks, Sparta and Boris, two cave lion cubs who lived tens of thousands of years ago, are now cared for by scientists in the city of Yakutsk in eastern Siberia.

They reside in the cold-storage room of a small building on a potholed backstreet of this hardscrabble city, as part of a unique menagerie of extraordinary Ice Age relics: a baby mammoth, a woolly rhino, the skulls of ancient bison and the still furry, still snarling head of a 32,000-year-old wolf.

Animals whose remains long since rotted away in milder climes have been preserved in the permafrost of Russia’s north, but while the discoveries of recent years are a boon for scientists, they also highlight this remote region’s vulnerability to global warming and to man’s search here for many kinds of buried treasure.

Boris and Sparta were unearthed deep in the interior of the Yakutia region, also called the Republic of Sakha, which is the biggest province on the planet. They were found in 2017 and 2018, just 15m apart, but scientists believe the male lived about 43,000 years ago and the female some 15,000 years later.

Both cubs are thought to have been less than two months old when they died, probably in rock falls or cave collapses, which entombed them in permafrost that preserved them so well that experts managed to determine their sex, and expressed hopes that Sparta’s body may even still contain traces of her mother’s milk.

They were discovered hundreds of kilometres northeast of Yakutsk beside a tributary of the remote Indigirka river, which flows north to the Arctic Ocean, at a place where the bones of ancient bears, wolves, horses, reindeer – and even an almost entirely intact, 46,000-year-old lark – have also been found.

Boris takes his name from a local man who spotted him while hunting for mammoth tusks – known as “ice ivory”– which feed a Chinese market starved of banned elephant ivory and fuel dreams of sudden, life-changing wealth among people eking out an existence in Russia’s far north.

“These things are always found by locals, not scientists – what can a dozen scientists do in a territory the size of India, that is inhabited by fewer than a million people?” says Albert Protopopov, head of the Ice Age fauna department at Yakutia’s Academy of Sciences.

“I have good relations with lots of tusk hunters, and when they find something they call me and send photos. Just the other day I was told about a mammoth found near Tiksi on the Arctic coast. They say there is fur and flesh and fat on it, but I don’t know how much of the carcass remains,” he adds.

“There is no other place like this in the world, where so many animals are found in such good condition. In some places, perhaps they make a big find once every 10 or 20 years – but here we find something really interesting every year.”

The cave lion cubs – two of at least four that have been discovered in Yakutia – are among the best-preserved Ice Age creatures ever found. Their soft, sandy fur is still marked with darker patches, their ears are brown and the pads of their paws and their claws are intact.

The wolf’s head still has reddish fur and formidable fangs, and a five-tonne, 39,000-year-old baby mammoth – nicknamed Yuka after members of the far-northern Yukagir community that unearthed her in 2010 – is the most complete member of her species yet discovered.

Both Yuka and the wolf’s head contained remnants of their brains, and the extraordinary condition of finds made in Yakutia has allowed scientists to extract the world’s oldest DNA from a 1.2 million-year-old mammoth tooth, and for a state-run Siberian lab to start researching ancient viruses and virus evolution this year.

Yet these long-extinct beasts, which grab world headlines when they re-emerge into the light, are of only passing interest to most of their discoverers.

They want mammoth tusks, and go to considerable risk and expense to find them, hooking up engines to high-powered hoses to gouge deep holes in the permafrost, then venturing into these unstable tunnels in the hope of hauling out a bone weighing dozens of kilos, which could fetch tens of thousands of euro.

Several people with knowledge of the trade said most “ice ivory” is sold by local tusk hunters to “agents” representing buyers from China, where mammoth bone meets huge demand created by a 2018 ban on the sale of elephant ivory.

Experts believe more than 80 per cent of all the mammoth tusks in Russia lie buried in Yakutia, and estimate that more than 100 tonnes are unearthed legally each year by people holding licenses – but that the illegal trade may be twice as large, running to tens of millions of euro.

As well as doing severe damage to permafrost – which is already melting due to global warming and emitting greenhouse gases as it thaws – the trade brings relatively small profits to most tusk hunters in Russia’s far north, while delivering much bigger sums to the agents and jewellery firms that sell finished carvings.

In what officials call a bid to bring control and transparency to the trade, and to reduce permafrost damage, Yakutia this year banned the export of all mammoth tusks longer than three metres.

Critics say the move will only fuel more smuggling, however, driving up criminality in the far north and making it even harder for many members of the region’s indigenous communities to make a living.

Russia officially recognises the presence of about 40 indigenous peoples in Siberia and the country’s far north and the far east, who for centuries lived mostly from reindeer herding, fishing, hunting and other traditional practices.

Soviet development of remote areas began to put pressure on these peoples and their way of life, but community leaders say the current push of Russia’s military and energy firms into the Arctic poses a bigger threat – especially at a time when climate change is also affecting pastures and animal migration routes.

Boris Nikolayev, deputy president of the Evenk people of Yakutia, said the peoples of Arctic Russia “await with great interest and some concern” the new wave of development in the region, having witnessed the environmental damage caused by previous generations of incomers who lived far better than local people.

In earlier decades, he said “residents of the Arctic understood that [industrial development] was necessary for the Soviet motherland, so they didn’t pay much attention to differences in wages, social and living conditions and benefits”.

“But after fulfilling their tasks and exhausting the natural resources … these ‘neighbours’ abandoned everything they had built and moved elsewhere,” he told the Northern Forum on Sustainable Development in Yakutsk last week.

“These so-called industrially developed places were almost completely lost to the traditional ways of life of the north, for centuries and perhaps forever. The bitter truth of history leads to fears … of another round of this so-called development of Russia’s Arctic zone.”

Avgusta Marfusalova, a long-time politician in Yakutia and advocate for the rights of its indigenous peoples, said herding, hunting and fishing were the “material basis on which the spiritual culture of the indigenous people of the north, Siberia and the far east developed”.

“And so, if [they] disappear, you can be sure the unique cultures of circumpolar civilisation will go too, as will those languages and those peoples.”

Experts warn that temperatures in the far north are rising twice as quickly as the global average, and Protopopov says plants are now flowering for considerably longer in the Russian Arctic, and mosquitoes have appeared for the first time in living memory on some of its islands.

He explains that searching for mammoth tusks is now one of the main sources of income in remote parts of northern Russia, and should be regulated to help protect the environment, bring transparency to the industry and raise both the income of the tusk hunters and Yakutia’s tax take from the trade.

Yet he opposes the ban on export of tusks longer than three metres, arguing that such finds are common, and that the move will drive the trade into the shadows.

Protopopov and his colleagues fear hunters will cut up and smuggle tusks, depriving scientists of a chance to examine them before export and breaking the link between specialists and the local people who now alert them to less profitable finds – like the cave lion cubs – which amaze the scientific world and general public.

“It’s a huge plus for us that they’re searching for mammoth tusks,” says Stanislav Kolesov, a researcher at Yakutia’s Academy of Sciences, which hopes to move its Ice Age animals to a planned World Centre of Mammoths in Yakutsk in about five years.

“It is precisely as result of them them looking for tusks that we have these discoveries. We have a big collection because of their work, because of things they gave us.”

“I think people here should be allowed to gather tusks. It will be good for them, for the Republic of Sakha and for elephants,” he adds.

“After all, it makes no difference to the mammoths – they died a long time ago. Now let them do some good by helping to save the elephants.”