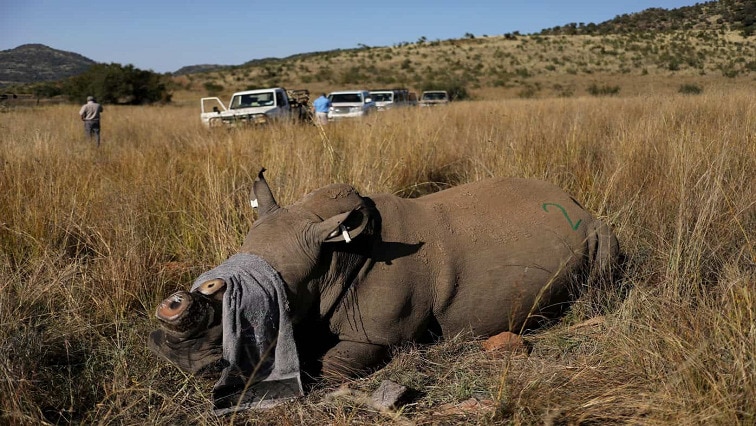 A rhino during a rescue operation. Image: As originally published by SABC News

Some anti-poaching organizations are calling upon the justice system to strengthen punishment against those found guilty of rhino poaching and rhino horn trafficking.

This comes after the Department of Forestry, Fisheries and the Environment recently released statistics indicating that rhino poaching incidents committed in the country within the first six months of the year have increased by 33% compared to last year,  during the same period.

Nature conservationists say the rhino is among the endangered species, not only in South Africa and the African continent but across the world.

According to the Helping Rhinos organisation, there are now less than thirty-thousand rhinos living in the wild today, compared to the start of the 20th century, where there were over 500 000 of them.

According to another study released by Save the Rhino International organisation in February this year, a rhino was poached every 22 hours in South Africa in 2020.

While this may sound alarming, it is actually the lowest recorded incident of rhino attacks in a year, in the previous decade during which over 8 300 rhinos were poached in the country.

“The poachers get caught and the next morning they are out on bail. That same guy will come tomorrow again. Our laws must treat it as a more serious crime than just poaching because tomorrow there will be no more rhinos. It’s a very very difficult situation that i suspect all the wildlife guys are sitting with, not only in South Africa. It’s the whole of Africa that we have to think of about that problem.

According to the North West Parks Board, a long term solution is needed for rhino poaching and horn trafficking.

Regional manager of 14 nature and game reserves in the North West, Johnson Maoka says there is a need to discourage the consumer market of the product, especially those using it for traditional medicine.

“But it is very unlikely since it has been a tradition practised for over six thousand years – particularly in Asia. Alternatively, persuade the consumer countries to breed and sustainably harvest the product unlike brutally killing the source, which is the rhino, for a single use,” says Maoka.

The Department of Forestry, Fisheries and the Environment, has released statistics indicating that in the first six months of 2021, 249 rhinos were poached, whereas during the same period, last year, 166 rhinos were poached. The national lockdown is said to have contributed to the decline of the incidents in 2020, whereas in 2021 when the restrictions were eased, the numbers increased again.

“The arrests that were executed during the operations in the last six months or so underscore the success of the collaborative work that has been done by the different law enforcement agencies. In this instance, the work that is done by the police, the Hawks, and the SANParks enforcement officers too. Our courts have shown that over the past few months, they have been dealing with the issue of poaching as a priority area and we continue to make sure that from the point of view on enforcement we deal with it,” says Modise.

Meanwhile, judgement in the case against three men who were arrested for rhino poaching in Rustenburg in the North West has been postponed to 19 October 2021 by the Mogwase regional court. The postponement comes after a COVID-19 case was recorded at the Mogwase Correctional Centre.

“The three are facing 10 charges including the contravention of Section 57 of the National Environmental Biodiversity Act, contravention of the National Environmental Protected Areas Act, possession of prohibited firearms, and possession of ammunition. They were in possession of six rhino horns when they were arrested for leaving the Pilanesberg Game Reserve in JULY 2018. The state intends on calling an expert witness to testify on the impact of killing three rhinos at a game reserve. We also intend on calling for a long term direct imprisonment as we deem these charges to be of a serious nature,” says Mamothame.

The trio will be remanded in custody as their bail was previously denied.