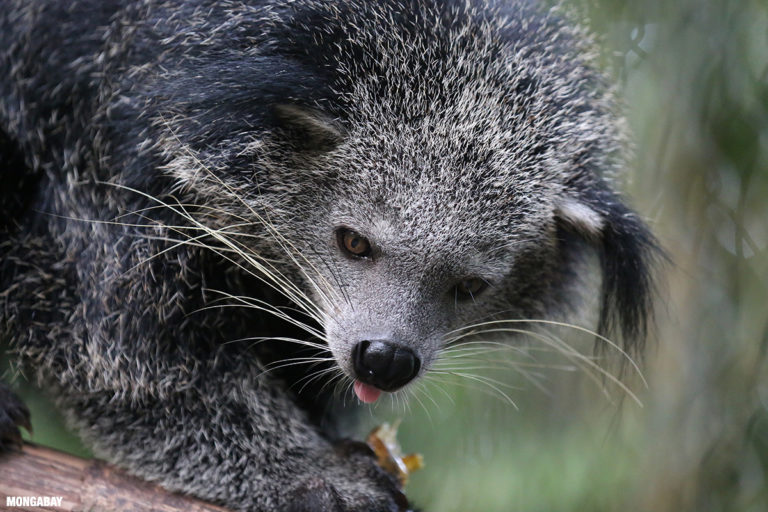 A binturong or bearcat (Arctictis binturong), photographed in Cambodia. In Vietnam, the meat is consumed and parts are used in traditional medicine. Image by Rhett A. Butler / Mongabay.

·        Earlier this year, in response to the coronavirus pandemic, Vietnamese Prime Minister Nguyen Xuan Phuc called for the drafting of a ban on wildlife trade and consumption by April 1.

·        After a delay of several months, on July 23, the government finally released a directive aimed at strengthening enforcement of existing rules governing the wildlife trade, but not banning the trade outright, as conservationists had hoped.

·        Conservationists expressed support for the directive as a major step forward, but cautioned that much work remains, particularly in terms of enforcement.

HO CHI MINH CITY, VIETNAM: On July 23, after several months of anticipation within Vietnam’s conservation community, the government released a new directive on managing the wildlife trade in the country.

Additionally, it calls for the elimination of markets that facilitate the illegal wildlife trade. The directive does exclude “aquatic species for production and processing for food and animal feed.”

Vietnam is a major hub for both domestic and international wildlife trafficking, and this directive could have far-reaching implications.

“WWF-Vietnam are very pleased to see the issuance of this Prime Ministerial Directive in relation to improving control of the trade of wild animals in Vietnam,” said Benjamin Rawson, conservation and program development director of WWF-Vietnam. “While there have been directives which contain some similar language in the past in relation to controlling the hunting, trade and consumption of wildlife, this has, until recently, been an issue of biodiversity conservation.”

Earlier this year, Prime Minister Nguyen Xuan Phuc tasked the Ministry of Agriculture and Rural Development with drafting a ban on wildlife trade and consumption in response to the COVID-19 pandemic, linking the issue with public health and the economy. Although science has not confirmed the exact origin of the virus behind the pandemic, experts believe it leapt from a wild animal to a human at a market in Wuhan, China.

Importantly, the new directive is not a wildlife trade ban, as has been widely reported since its release. In response to that reporting, the New York-based NGO the Wildlife Conservation Society (WCS) released a statement on July 27 saying “the directive does not ‘ban the wildlife trade,’ rather it calls for heightened enforcement of existing laws on illegal wildlife trade in Vietnam.”

None of the experts interviewed for this article referred to a ban either, instead using the official term of “directive.”

There are important new aspects of the directive, however. For example, according to the WCS statement, “the Directive requests the courts and prosecutors to impose strict penalties on those who abuse their position and authority to commit wildlife crimes. This is the first time such corruption has been acknowledged and prioritized.”

It also directly lays out responsibilities for eight national-level ministries, including the very powerful public security and defense ministries, in addition to state media and state judicial bodies.

“I had thought it would not be easy to have a directive that all the ministries would agree on, so although it came out a lot later than we had wished, it was a great move by the Prime Minister to show Vietnam’s commitment to contribute to the global effort to prevent another pandemic,” Hong Hoang, founder and executive director of CHANGE, an environmental NGO based in Ho Chi Minh City, wrote in an email.

Trang Nguyen, founder of the Vietnam-based conservation organization WildAct, said she was also happy to see the directive’s release, but noted some additional shortcomings.

“The directive does not include the domestic use of wildlife for medicine, or as pets,” she said. “It is also unclear which control or management will be put in place for the domestic, legal trade of wildlife and wildlife farming. The trade of legal wildlife products and places such as wildlife farms are also a cause of zoonotic outbreaks.”

“I think the directive signed by the Prime Minister in this context will make the wildlife trade more like an emergency, an urgent thing to do, which will push ministries and the involved parties to take it more seriously,” she said.

All three conservationists stressed that enforcement will be essential.

“Vietnam has many laws protecting wildlife and biodiversity already, but law enforcement has always been a huge challenge,” Hoang said. “I really hope this time, using the strong language of the directive, we can engage with the provincial governments, the police, Customs, and the media to make sure the directive is seriously implemented by all sectors at all levels.”

Under Vietnam’s current penal code, revised in 2017, individuals who break laws related to endangered species can be jailed for up to 15 years or fined up to $86,500; corporations can have operations suspended for up to three years or be fined up to $650,000. However, very few people have been prosecuted under these laws, despite massive busts involving trafficked rhino and elephant ivory, as well as pangolin scales and meat.

“Implementation and enforcement are what we need to see,” Nguyen added. “Hopefully this will not be lip-service. I think the strongest message from the government would be physically closing down the domestic illegal wildlife markets, most of which have been around for a very long time and are rather well-known.”

Meanwhile, Vietnam faces a new wave of COVID-19 infections after going 99 days without detecting any community transmission of the virus, a development that could distract from efforts to extinguish the illegal wildlife trade.