Any bloody fool can kill an elephant at 200 yards.

By Peter BorchertNovember 25, 2020Editorial
No Comments 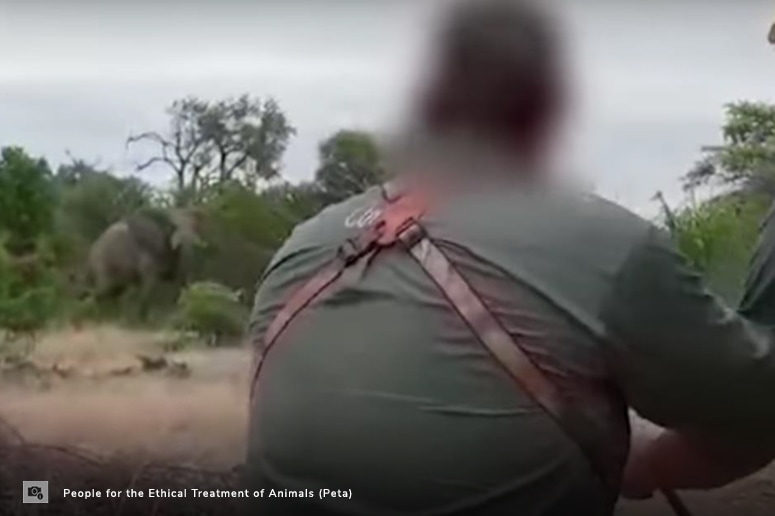 Screen grab from video footage of an elephant hunt on a farm in which South Africa’s president, Cyril Ramaphosa, is purported to have a financial interest. The claim has been strongly denied by Ramaphosa. Image source: People for the Ethical Treatment of Animals (Peta).

In hunting big game, facing danger is the height of the hunting ethic. Any bloody fool can, without encountering the smallest modicum of risk, murder a bull elephant at 200 yards with a lung shot. This is not elephant hunting, but elephant killing. But, to walk for a week, thirsty and footsore over hot, dry thorn-spiked terrain, disappointed a dozen times by small or broken tusks, frightened witless by the female of the species or seemingly unshootable bulls, and then to finally track down a big tusker in heavy cover for a confrontation at less than 15 yards—well, that is elephant hunting.
PETER HATHAWAY CAPSTICK (1940–1994)

Peter Capstick was amongst the last of his mold—the “great white hunter.” This Wall Street stockbroker turned professional hunter is often ranked with Ernest Hemmingway and Robert Ruark, for like them, he, too, was a prodigious writer about his adventures in Africa. Included among his 13 books is Death in the Long Grass, from which the above quote is taken.

Whether you see Capstick as a villain or a hero is neither here nor there, he was a product of his time. If nothing else, he wrote with sincerity and passion about his hunting adventures in Africa. In the process, he has given many insights into the character of some who hunt big game for the thrill of it. I say “some” deliberately, for I very much doubt many who chase down trophies these days would survive the rigors and challenges of hunting as Capstick experienced them.

And at least he was honest. Capstick didn’t dodge the “why” he did what he did. He just liked it. “Sneer if you will,” he challenged, throwing down the gauntlet to his critics, “but you will have only half-lived your life if you never feel the icy clutch of danger for its own sake.”

Ask a trophy hunter today why he (or she) shoots wild animals, and you’re likely to be confronted by little more than truculence and bluster—angry dismissals of the non-likeminded as interfering, tree, or bunny-hugging do-gooders. “Greenies” is the favored term, usually carrying “fokkin” as its prefix. It has a special place in the South Africa lexicon, especially among those defending canned trophy hunts.

Such belligerent reactions are perhaps understandable given that in South Africa, trophy hunting is big business. It is, too, in the United States where a small but significant number of people are wealthy enough to indulge their need to kill the biggest, heaviest, most dangerous wild creatures. Something they do for no greater reason than for boasting rights and demonstrating their “power” amongst those impressed by such feats.

America produces by far the most significant number of trophy hunters in the world. And apart from Canada, the destinations that attract them the most are a handful of countries here in southern Africa. In the decade running up to 2014, more than 560,000 trophies from these countries were imported back into America. Nearly 70 percent of them came from South Africa alone. And, but for the Covid-19 driven interruption of global travel, the one-way transport of dead animal parts continues unabated.

Some arguments proffered in the contemporary hunter’s defense are seated in notions of hunting as inseparable from “being human,” something that has been part of our evolutionary journey through countless millennia. Really? Even the most unrepentant hunter would probably understand the shakiness of such a stance. No, you are far more likely to be subjected to justifications around contributing to the livelihoods of poor communities, as well as the tourism economy as a whole.

Although such claims may be valid in part, they are disingenuous. I think it highly improbable that any American trophy hunter would walk into his outfitter’s store and say, “I desperately want to help poor people in Africa, and to do so, I need to kill an elephant with great big tusks. Can you please arrange this philanthropic experience for me?” No, it is simply the desire to kill, boast, and demonstrate power that motivates the hunter. Anything else comes a very poor second.

Hunters will also introduce the principle of “fair chase” into their justification arguments. However, this is just an attempt at suggesting the chosen quarry is hunted in a large enough piece of land for it to have the chance of escape. I don’t think so. Hunters pay a lot of money for their license to kill, and they are not to be denied if their host has any hope of doing future business with them.

“Fair chase” is only part of the jargon used to project trophy hunting as a safe, respectful, well-regulated, legitimate, and “ethical” recreational pursuit with overtones of wildlife stewardship. It is presented as some strange contract of honor between human and beast—a one-sided pact that sees the one-party filled with a sense of triumph and the other robbed, without consent, of its life force. In essence, this “ethical” code of conduct is simply self-serving. It is nothing but a thin veneer of respectability that tries, unsuccessfully, to project the hunting and killing of another sentient creature as a legitimate sport.

By now you might have gathered that I have little or no time at all for trophy hunting. So, perhaps you will understand the red mist that descended when I read the recent account of an elephant being killed on a farm unfenced from and adjacent to Kruger National Park. My rage was all the more given that Cyril Ramaphosa, South Africa’s President, was alleged to have a financial interest in the farm. Subsequently, he has hotly denied this.

Whatever the case, my anger soon dissipated into a profound sadness. The outcome and the President’s involvement or not hardly seem to matter. My sense of loss is because it happened—an elephant died, and its death was completely unnecessary.

If you dare to watch the video clip of the hunt, please do so. It shows an inept hunter needing several shots to down his quarry that seconds before had been a proud, magnificent ambassador for the wilderness. Indeed, there can be no nobility in the hunter’s act, and I am certain that the die-hard spirit of Peter Capstick would also sneer at this particular “bloody fool.”