It was a sad year for Sabah’s wildlife which saw the death of its last known male and female Sumatran rhinos as well as continued killings of pygmy elephants.

Iman, a 25-year-old female rhino in captivity at the Borneo Rhino Sanctuary in Lahad Datu, died of natural causes on Nov 23.

Her death came before a Memorandum of Understanding (MoU) for the proposed Malaysia-Indonesia collaboration to obtain some new egg cells from her was signed. A male, Tam, also succumbed in May.

The State Ministry of Tourism, Culture and Environment remained adamant in pursuing the MoU as both Iman and Tam still live on as cell cultures in Malaysia.

Tam’s preserved remains are now on exhibit at the State Museum until Dec 31, 2019. His taxidermy skinning process led to the discovery of seven bullets with lead pellets found on fragments of his hind leg and lower part of his tail. Earlier, members of the public contacted the Daily Express to call for its preservation. 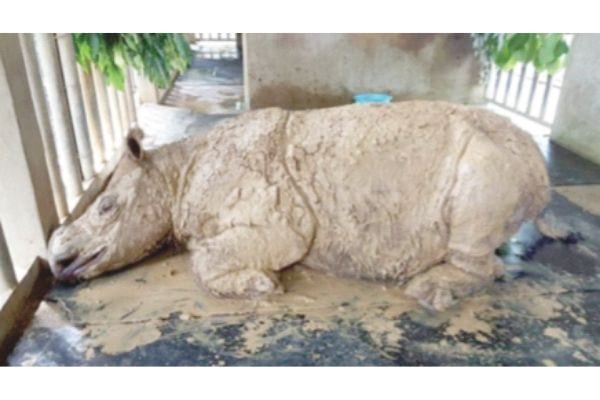 Original photo as published by Daily Express: Iman before her demise.

Malaysian police para-military unit, Tiger Platoon, has also been called in to assist the Wildlife Department to stop the senseless killing of the elephants.

In November, the Tiger Platoon from the General Operations Force was assigned to assist relevant authorities in protecting the wildlife in the State.

The special platoon is to be mobilised to conduct patrols, track down suspects and carry out joint raids with enforcement officials, including from the Wildlife Department and the Sabah Forestry Department.

Inspector-General of Police Tan Sri Abdul Hamid Bador was quoted as declaring open war against those responsible. In Sabah, all the five PGA battalions have been tasked with combating illegal hunting activities and the plundering of forest treasures.

It also came as a shock that a syndicate had been active in Sabah smuggling pangolins worth RM8 million in February and that the State Wildlife Department or authorities knew nothing about its operations for seven years.

The 30-tonne pangolin haul was also picked up by the world’s press, calling it a record. The seizure from one single raid that went unnoticed by the authorities confirmed there was massive poaching going on in Sabah.

Seven pygmy elephant deaths were reported since September, in which elephant tusks were also reported missing, with some smuggled into Indonesian Kalimantan.

Two tusks involving the case in Dumpas Kalabakan were recovered. The elephant that owned the tusks was found dead with 70 shots. Its two tusks were found buried at the Kebun Koperasi Felda Umas area. A plantation manager has since been charged in court for refusing to hand over the tusks. Three others accused were also brought to court.

Just a week after Sabah hosted the 10th Asian Elephant Specialist Group meeting in December, another elephant was found dead in Kinabatangan.

The human-elephant conflict in Sabah attracted the attention of non-governmental organisations and its population was estimated to be down to 2,000 in the State. The pygmy elephants in Sabah are a different species compared to their Asian and African cousins.

A very high number occurred in conflict areas with more than half either shot or due to suspected poisoning, while the rest due to natural causes.

But all hope is not lost for the Borneo pygmy elephant. A subspecies of the Asian elephant inhabits north-eastern Borneo, Indonesia and Malaysia. Its exact origin remains the subject of debate.

In October, the Ministry of Tourism, Culture and Environment completed its Elephant Conservation Action Plan 2020-2030 which they hope will provide more insight into engaging better collaboration with plantation owners in efforts to create food corridors and better conservation for the mammals.

That same month, the conservation of iconic wildlife in Kinabatangan received a major boost with the handing over of 230 acres (93 hectares) by Japan’s Saraya Co Ltd and Borneo Conservation Trust (BCT) Japan to the State Government.

The Ministry expressed preparedness to amend and further tighten the penalties for wildlife-related crimes under the Sabah Wildlife Conservation Enactment 1997.

Borneo’s pygmy elephants are a fully protected species as stated in Division 1, Schedule 11 of the Wildlife Conservation Enactment 1997.

On September, the 2nd International Symposium on Sun Bear Conservation and Management hosted in the State Capital affirmed that sun bears along with Bornean orang-utans and Sunda pangolins in Sabah are a totally protected species under the Wildlife Conservation Enactment 1997.

The enactment forbids hunting, possession and trade of wildlife species under Schedule 1 and those found guilty could face up to RM250,000 fine and up to five years’ jail.

The Bornean Sun Bear, also known as honey bear, is the smallest bear in the world. Honey, fruits and termites are their favourite food. They are expert climbers and make nests on trees.

Each individual has its own unique chest mark that gives the precious creature its name, the sun bear. Found throughout Southeast Asia, it is estimated that the global population has declined by at least 30 per cent over the past 30 years and is continuing to decline at this rate.

A Department of Wildlife and National Parks Peninsular Malaysia (Perhilitan) analysis estimates that there are only 300 to 500 sun bears left in Malaysia as of 2018. Its population in Sabah and Sarawak is unknown.

Sabah Wildlife Director Augustine Tuuga, during the Sun Bear Conservation Symposium, noted that poaching is currently the biggest threat to sun bears, particularly to feed the ongoing demand for their body parts, including gallbladders, paws, claws and canines.

Apart from poaching, there are also incidents of sun bear cubs being taken from the wild for pet trade in many places across Sabah.

The Department has prosecuted two cases involving sun bears in the State over the past years. One was convicted by court and sentenced to RM50,000 fine and two years’ jail, while the other is still appealing the sentence.

During the operation, six turtle shells were recovered from the men, aged between 25 and 45-years-old.