Kenyan art aficionado Mutuma Marangu has an interest in the natural world. “I believe there is a need to bridge artistic and cultural sectors with wildlife and conservation,” says Marangu.

“These four are amongst the best stone sculptors in the world, as they have mastered both the use of hand tools and power tools … and the use of different stone mediums,” Marangu said.

The exhibition presents medium-sized elephant and rhino figures carved from different rocks and buffed to a smooth exterior. 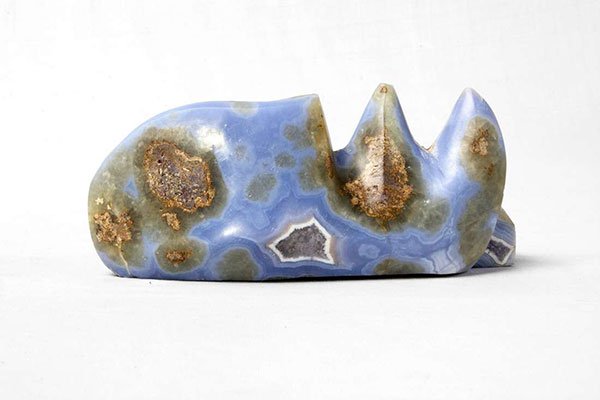 Some are figurative and others are abstract in shape. The simple forms, clean lines and reduced details of the carvings let you appreciate the natural beauty of the stones, which have spots, striations, multiple colours and other markings. You also marvel at the wide variety of rock types in Kenya; their origins are highlighted on a large map on one wall.

I saw at least five different colours in Kisii soapstone, a soft easily carved rock widely occurring around the world.

A fascinating material is petrified wood, which has a mottled brown and bronze colouration. It comes from the semi-desert region of Lake Turkana that was forested millions of years ago. Volcanic actions preserved the remains of trees into fossilised material that is as hard as rock.

Two or three elephants are carved from deep purple amethyst stone. Oendo has sculpted a small abstract rhino from bluelace agate, an unusual stone of a sky blue colour with blotches of light brown.

Unblemished bluelace agate and amethyst are used to make semi-precious jewellery, and I like that these artists have chosen to carve rocks containing other naturally occurring hues.

More pieces are expected as the museum creates suitable plinths for statues weighing up to 40kg. The exhibition is on until October 31.