Artist brings white rhino back from the dead, digitally

By NewsroomNovember 27, 2019Education
No Comments

His name was Sudan. And poignantly, he was the last of his kind, the last male northern white rhino. His final years were spent on a nature reserve in Kenya. Old and infirm, he was put to sleep in March, 2018. His death, at 45, made news headlines around the world.

But now, almost miraculously, Sudan is back and roaming again digitally. He’s currently a star life-size exhibit at London’s Royal Academy. The show is called “Eco-Visionaries” and is about how artists, designers, architects are responding to the climate emergency.

London artist Alexandra Daisy Ginsberg first heard about Sudan’s fate on Twitter and was moved to resurrect him. 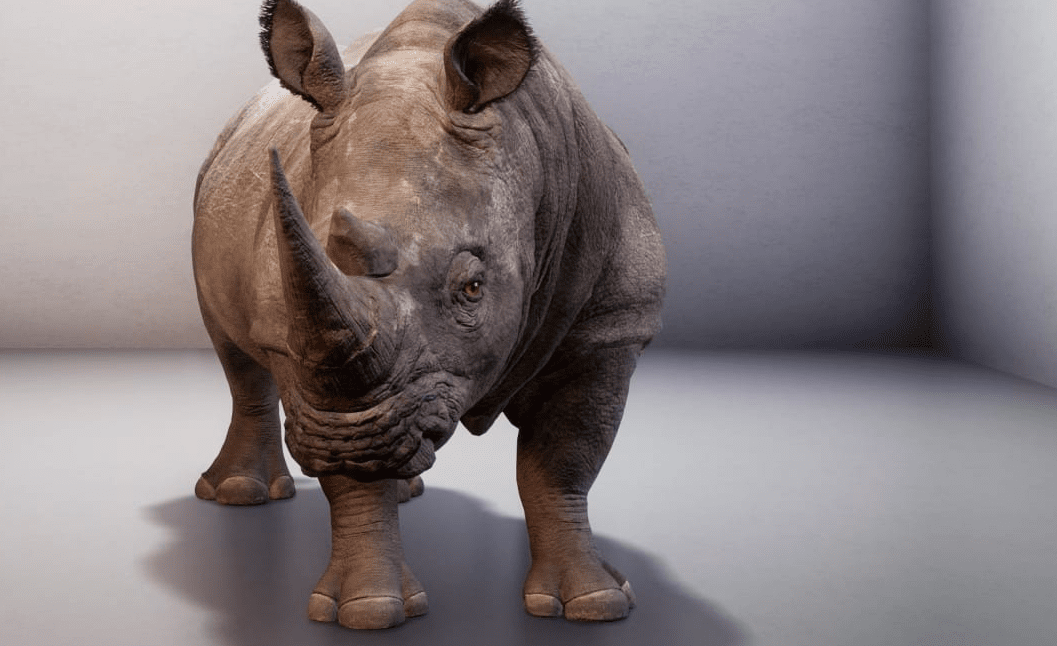 Ginsberg’s six minute video installation is called “The Substitute” (2019). Sudan was re-created from zoo archive footage and computer models supplied by a London visual effects company, The Mill, while the way he moves is based on research by artificial intelligence company DeepMind.

You simply sit on a bench and watch Sudan materialize before you – as Ginsberg puts it, “basically a rhino in a box.” You hear his snorts. You sense his bulk, his weight. And for a subliminal moment, he looks directly back at you and catches your eye.

Ginsberg says that she gets “incredibly emotional” seeing him. She’s both “terribly pleased but infinitely sad” to have created “his ghost.” Her aim was to make us think about our place in the natural world.

“Why can’t we look after what we have? These stories are so urgent. We need to change our behavior. And it’s up to us to tell governments.” She says quietly, twice: “We’re not doing well.”

Inescapably, museums and galleries seem increasingly compelled to show work that addresses the climate emergency. How could they not? “The Substitute” is also currently on display in New York and in the Netherlands, while “Eco-Visionaries” has been shown — in different permutations since 2018 — in Portugal, Spain, Switzerland, Sweden and now England.

Here and there, the Royal Academy show is forgivably guilty of being a little didactic.”A Film, Reclaimed” by Brazilian artist Ana Vaz and French filmmaker Tristan Bara uses a montage of old movies to literally spell out its bleak message: “Our economic system is at war with the planet. The absence of future has already begun.”

London artist Kate Davies acknowledges that the climate change narrative “can be very black and white,” but the reality is “much more complicated, more confusing.” Her contribution to “Eco-Visionaries” — as part of the Unknown Fields collective — is an astonishing short film about the vast salt lakes in Bolivia. The source, she says, of up to 70% of the world’s lithium.

We see it all from a drone, flying over hectares of crystalline salt lake, fractured in almost uniform polygons. We sweep across the lithium mines, great rectangular pools of evaporating salt, in blues and greens and dirt brown.

Davies is especially interested in “the materiality of our every day things,” that our laptops, phones, our electric transport are powered by lithium batteries that originate in this landscape. And this comes with its own mythology.

As she tells it, according to the ancient indigenous story, the biggest volcano was jilted by her lover after giving birth to a child. Her tears, mixed with her breast milk, created the great salt lakes. Hence the title of the film, “The Breast Milk of the Volcano.”

Davies holds up her own mobile phone. “The tears of an ancient volcano made your phone. Inside is mythical magic,” she says.

The final exhibit in “Eco-Visionaries” requires timed entry. For 15 minutes, in a darkened room, you sit in front of your own reflection and then as the lighting shifts, you realize that the bench is just a few feet from a glowing oval tank, filled with flowing sea water and a dancing bloom of living moon jellyfish. They float and pulsate, like so many silk parachutes. The effect is mesmerizing.

The work is accompanied by a sobering soundtrack — snippets of interviews with marine scientists — and basic questions: “What will life be like in 50 years or less?”

The fact is that jellyfish have thrived on global warming and now proliferate in coastal ecosystems, threatening other species. The piece, by German collective Rimini Protokoll, is called “win><win.” It’s is currently on show in London, Essen, Singapore and Moscow.

The collective’s Helgard Haug says the intention is to “make us reflect in a very playful way.” She hopes that people will be encouraged to talk about the piece afterwards.

Haug is optimistic. She says that she is “surrounded by young energetic people who know what has to be done” about climate change.