By NewsroomMarch 12, 2020Uncategorized
No Comments

The orphanage is a non-profit organisation that cares for orphaned and injured baby rhinos with the aim of releasing them back into the wild.

Mech’s series of 20 pieces of mixed media on canvas is called Barely There. Each piece depicts a different endangered South African species. The artworks are contemporary, almost skeleton-like embossed pieces.

Mech explained that she wanted to create works that would have a story to tell, which she calls ‘creativity with a conscience’. They are designed to start conversations about the plight of a number of threatened species. 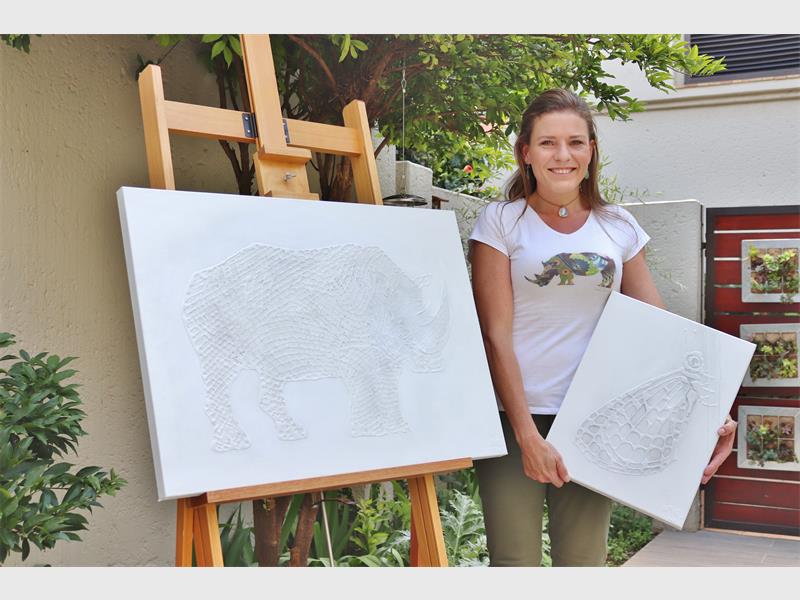 Original photo as published by The Killarney Gazette: Ingrid Mech shows off her white rhino and the Wolkberg Zulu butterfly. (Photo: Sarah Koning)

“I am not an artist by profession; my day job is actually running large-scale change and transformation interventions in corporate environments. I felt the need to try to bring about positive change in a sphere beyond my occupation. I wanted to apply one of the techniques I use in financial services daily in change management which involves doing something ‘different’ to bring about change and thereby start a conversation to create awareness for a worthy cause.”

She originally intended to create one or two pieces to auction, but research into the subject made her realise how many severely threatened fauna and flora there are, prompting a far larger project than expected.

“It really is a very small exposé of a very long list of threatened species in South Africa. My hope is that we generate some awareness – it starts with one person, then one community, one city. We can all have an impact.”

All funds raised will be donated to feed orphaned and injured rhinos.

To view the artworks on social media, search Ingrid Mech on Facebook or alternatively email ingridmech@gmail.com.