In line with the Supreme Court’s directions, Assam government has approved a draft proposal for a long pending eco-sensitive zone around the Kaziranga National Park and sent it to the Centre, officials of the state’s Department of Environment and Forest said on Wednesday.

The move is aimed at regulating activity including mining around the famed national park, a UNESCO World Heritage Site home to the big five including the one-horned rhinoceros, Royal Bengal tiger, elephant, water buffalo and swamp deer among other species.

While the Supreme Court guidelines direct an eco-sensitive zone of up to 10 kilometres from the boundary of the protected area, the extent of the KNP ESZ would be zero to two kilometers of the boundary of the national park, according to state’s forest officials who were involved in the exercise of drafting the proposal.

“I can confirm the ESZ proposal has been sent today to the Centre and if they find that it’s in order, the draft will be notified by them,” said Jishnu Baruah, Assam’s Additional Chief Secretary. 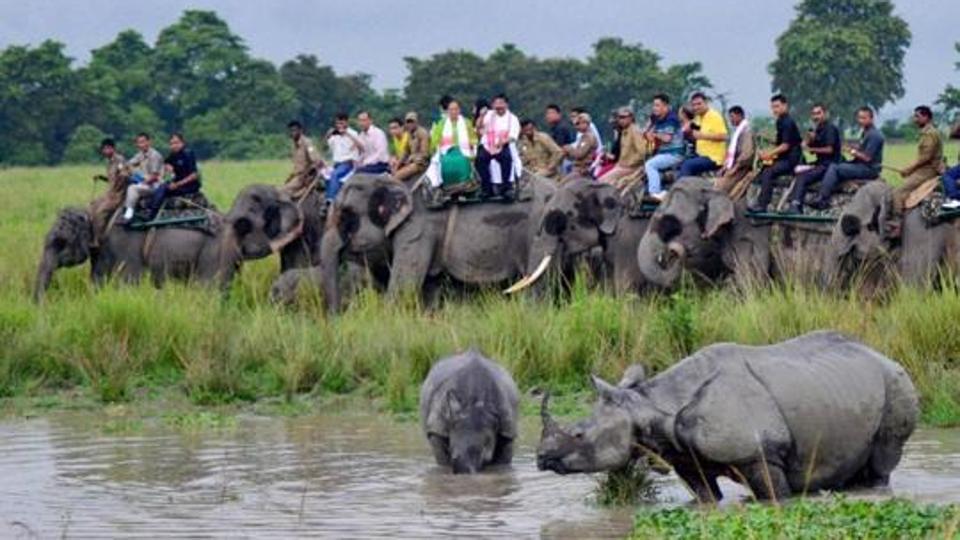 Original photo as published by Hindustantimes.com: Tourists watch a one-horned rhino with her calf as they cool off in Assam’s Kaziranga National Park. (PTI)

“The protected area under the KNP and the proposed ESZ would together come to over 1200 square kilometers,” said AM Singh, Principal Chief Conservator of Forest (PCCF) and Head of the Forest Force, Assam who also served as the chairman of the committee which drafted the proposal.

The ESZ would cover areas in districts of Golaghat, Nagaon and Biswanath which is on the other side, on the northern bank of the Brahmaputra river, he said.

According to the Union Ministry of Environment, Forest and Climate Change guidelines, the purpose of creating ESZ around wildlife sanctuaries and national parks is to have some kind of a buffer and a transition zone from area of high protection to areas of low protection.

Once an ESZ is notified, there are three categories of activities, prohibited, regulated and permissible. For example while commercial mining and setting up of polluting industries is prohibited, establishment of hotels and resorts would be regulated as per the guidelines.

Earlier this year, the Supreme Court banned all mining activities along the Kaziranga National Park and catchment area of rivers originating in Karbi Anglong Hills in Assam.

“The proposal that has been sent was made keeping in view the Supreme Court directions and to make sure people who are living around the KNP are not affected,” said Parimal Suklabaidya, Assam’s Environment and Forest Minister said adding that those who have objections could make them once the draft is notified.

Several groups have been protesting the proposed KNP ESZ.

“It does not mean that the activity would come to a standstill once ESZ is notified. It just acts as a buffer between protected areas and areas of high human activity to make sure habitat and wildlife remain protected,” said DP Bankhwal, former PCCF (wildlife), Assam. “The ESZ extent should be minimum of a kilomtere for an extent of zero from the boundary would defeat the very purpose,” he said.