By NewsroomApril 28, 2020Conservation
No Comments

Four prominent conservationists in Assam have opposed the move to construct more highlands in the state’s Kaziranga National Park as a means to give shelter to wild animals during floods.

On Friday, union minister for environment, forest and climate change Prakash Javadekar had a video conference with Assam forest minister Parimal Suklabaidya to discuss ways to mitigate the loss of wildlife during the annual floods in Kaziranga and other protected areas of the state.

“Directed that more highlands maybe made for wild animals, to take shelter at the time of floods,” the union minister wrote on his Facebook page. He also asked Assam officials to ensure wild animals are not killed due to accidental hits by vehicles. 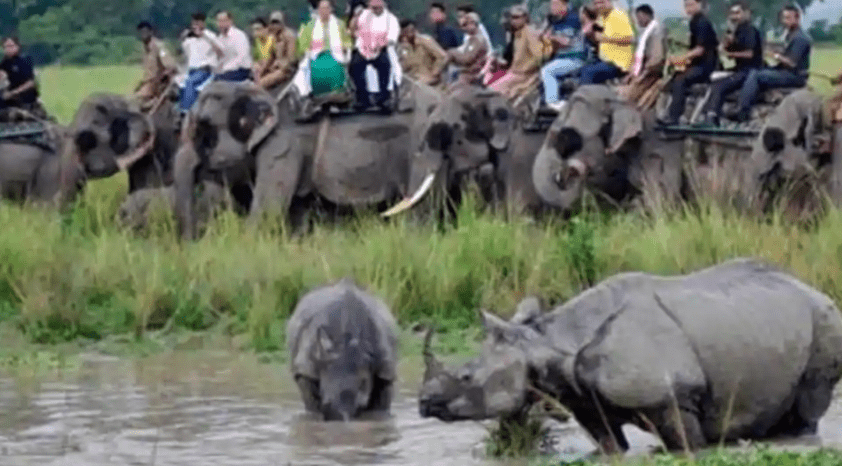 Original photo as published by The Hindustan Times. Kaziranga gets flooded every year forcing the animals in the national park to move towards hills in Karbi Anglong district.(PTI Photo)

In a statement issued on Sunday, Anupam Sarma, Team Leader of Brahmaputra Landscape, WWF India, Bibhab Talukdar, founder of Aaranyak, Rathin Barman, joint director of Wildlife Trust of India and Kaushik Barua of Assam Elephant Foundation cited 10 reasons why the move was not a good one.

Spread over 430 sq km, Kaziranga is the biggest habitat of the one-horned rhinos in the world. But every year during floods nearly 80% to 90% of the park gets inundated forcing animals to cross the national highway located nearby and head to the hills of Karbi Anglong district.

In an attempt to protect animals, artificial highlands to allow wild animals to take shelter during floods were constructed inside the park. At present there are 144 highlands inside Kaziranga.

Nearly 200 animals including 18 rhinos were killed in the park during floods last year. But though the floods bring devastation, it also helps regenerate the grasslands inside the park, which are crucial for survival of rhinos and several other species.

In their statement the conservationists said construction of more highlands might change Kaziranga into a drier habitat and in the long run it might not remain suitable for rhino, swamp deer, wild buffalo etc.

“In every flood, the highland will erode naturally and deposit extra silt in the wetlands and water channels will eventually dry out. This will cause more damage to Kaziranga’s already fragile eco-system,” the statement read.

“Change of vegetation is likely to compel the animals to stray out of the park’s boundary, especially during dry seasons. This will bring more threat to the animals, especially the rhino,” it added.

The conservationists said that the new highlands may affect prey-predator reflex as it will affect visibility, might introduce invasive plant species in the park and may reduce grasslands for rhinos and other herbivores to graze on.

“It will be more beneficial if more emphasis is given to grasslands management, restoration of wetlands and anti-erosion matters rather than making highlands,” said the statement.

The conservationists suggested undisturbed animal movement in the identified animal corridors in Kaziranga and construction of an elevated highway to allow the wild animals to move to the Karbi Anglong hills during floods.