By NewsroomJuly 28, 2020Land conservation, Rescue and rehab, Uncategorized
No Comments 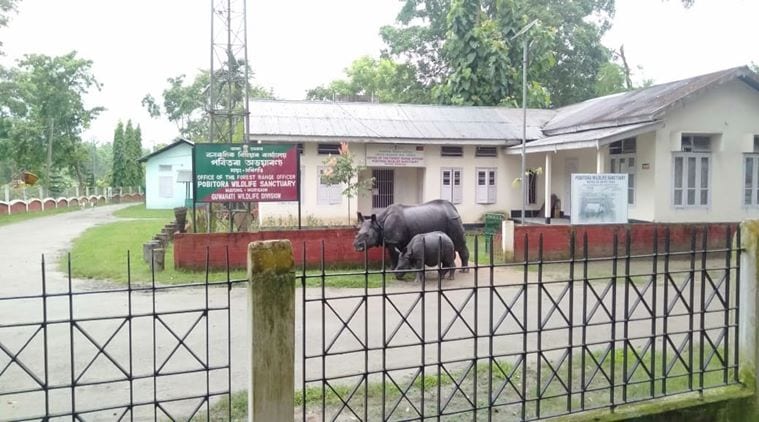 Displaced by the flood, a pair of rhinos visit the range office at the Pobitora Wildlife Sanctuary. (Source: Mukul Tamuly. Original photo as published by The Indian Express.)

The rhino is about 30 feet from the bathroom, settled in a spot by the pond in Nripen Nath’s backyard. As it chews on his gourd vine, grunting occasionally, the 47-year-old and his two daughters watch silently. “I am not scared,” says Nath, who works as a tour guide, “I love animals.”

The same cannot be said for his aged parents, who, too, have been sharing this ‘Assam-type’ cottage on the fringes of the Pobitora Wildlife Sanctuary with the endangered animal for over a week now as it takes refuge from the floods.

“Chase it away, there are kids in this house’,” Nath recalls his father saying, when the rhino ambled in last Friday. But the animal has shown no signs of budging, except to forage for grass in the backyard, and on one occasion, destroy his bamboo shed.

It Rajamayong village, it is not only Nath’s home that is witness to such a curious sight. Sleeping in the courtyard of 70-year-old Radhika Devi’s house are a female rhino and her calf, forcing the occupants to stay indoors from sundown every day. “We can’t even use the bathroom [located outside the house] at night,” says a disgruntled Devi, on the phone from her village.

Rhinos straying out of Pobitora — located in the floodplains of the Brahmaputra river in the Morigaon district, and surrounded by at least 27 villages — is not new, especially during the annual floods when food becomes scant inside sanctuary. However, this year’s unusually prolonged deluge in Assam — which has taken 97 lives and affected nearly 40 lakh people — has resulted in a serious shortage of food forcing the animals to move out of the sanctuary for such long stretches for the first time.

“It is a very serious problem,” says MK Yadava, Additional Principal Chief Conservator of Forests (Wildlife) and Chief Wildlife Warden, Assam, “For the first time, we have had to provide them with grass and fodder from outside.”

As of Saturday, ninety per cent of the sanctuary remains submerged. “While floods are a natural occurrence, the situation is grave this year and the animals are stressed — all the grass is submerged,” says Jitendra Kumar, DFO, Guwahati Wildlife Division.

In July alone, multiple waves of floods have submerged the tiny wildlife sanctuary, giving its animals little time to adjust. “In 20 days, there have been three waves,” says Dr Bibhab Talukdar, rhino expert and secretary general of wildlife NGO Aaranyak. “Usually floods happen in cycles from June until mid-September, waters recede for about two-three weeks before another wave hits the sanctuary. But this time, while one wave has barely receded, another wave hits. This is a rare case.”

On Friday, two rhinos visited the sanctuary’s range office in search of food. Since then, Mukul Tamuly, Range Officer, Pobitora, has left the gates of his office open, so the rhinos can come feed themselves “as they please.” “We have also cut stacks of grass and left it out in the open for them,” he says.

In Nath’s house too, the rhino is getting a free range. “I have convinced my parents since I know a thing or two about animals,” says Nath. “They won’t attack for no reason. But our neighbours are scared, ringing up the forest department at the slightest movement.”

Currently, five rhinos are taking refuge in three homes in Rajamayong village. “Many others come and go,” says Tamuly, who is in constant touch with the families, in case they need help. “We are patrolling, creating awareness among people so they don’t chase it away. Any damages in their homes, we will compensate for.”

While the Kaziranga National Park is synonymous with rhinos, the little-known Pobitora — earlier a grazing reserve and notified as a wildlife sanctuary in 1998 — has the highest density of rhino population in the world. “There are 102 rhinos in a 16 sq km area of the sanctuary, which means about six to seven per sq km— imagine that,” says Tamuly, “In Kaziranga, there are about two per sq km.”

While the high density means that the area has a good gene pool and can be used as a source population to translocate rhinos, animals are increasingly jostling for space in the sanctuary, which is notified to be 38.8 sq km on paper. “As per the 1998 notification, Pobitora Wildlife Sanctuary should include the area of Pobitora Reserve Forest, the adjacent Rajamayong Hills as well as the khas land which connects the two areas,” says DFO Kumar, “However, the forest department still does not have control over the connecting area — if we did, then the animals would have a safer passage to the hill areas during the flood.”

Yadava said he has spoken to the Morigaon administration and the problem will be sorted as soon as there is some respite from floods and Covid in Assam. “But it is not just about getting possession of this area but consolidating the sanctuary. This is a matter which has not been given attention for so many years,” he says, “We are thinking of a more long term approach, for the floods will just worsen every year.”

Tamuly — who has been working in the sanctuary for a decade now — says that while it was imperative that Pobitora extends in area, the animals need highlands to take refuge on. “Some highlands need to be created as a short term measure at least,” he says, adding that even if areas are acquired higher roads will need to be built for a safe passage for animals to go to the Rajamayong Hills.

Apart from rhinos, feral buffaloes, wild boar also inhabit the sanctuary. “It was earlier a grazing reserve but came to limelight in the 1960s when rhinos were spotted,” says Talukdar, “So it is very common to find rhinos, along with cows, goats — and many times — people, in the same area, all very used to each other.”

But at Nath’s home these days, the rhino sleeps fitfully in its new environment. “It will hear a utensil fall in the kitchen, or someone washing clothes — then it wakes up and cocks its ear, wondering where the sound came from,” says Nath, with a laugh, adding that at night, the rhino will begin to feed, feasting on the vegetables they have planted. “My parents get angry, but I tell them — look, people from all over the world come to see the rhino, but here, the rhino has come to see us. Are we not lucky?”