By NewsroomFebruary 11, 2020Anti-poaching
No Comments

GUWAHATI: A rhino poacher was arrested near Bagori range of Kaziranga National Park in Nagaon district of Assam on Saturday morning. 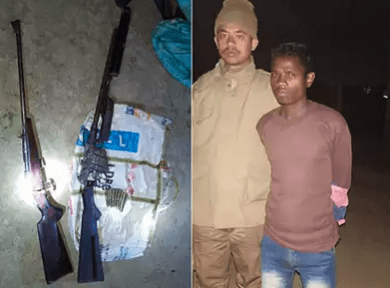 The poacher, identified as Pradip Mura, was apprehended from Harmati, a fringe area of the park. “The poacher was keeping arms and ammunitions ready for poaching. But he was waiting for a shooter. There are more people with him. We will be slowly picking them up once we are through with the investigation,” Jakhalabandha police station officer-in-charge Nipu Kalita said.

One .303 rifle with magazine and suppressor, eight rounds of live ammunition and one .22 rifle along with magazine was recovered from Mura’s house.