By NewsroomOctober 17, 2019Conservation, Rescue and rehab
No Comments

GUWAHATI, INDIA: One August afternoon in 1991, rangers at India’s Kaziranga National Park rescued a startled rhino calf. The young female, believed to be just a few months old, had just survived a tiger attack and was separated from her mother in the melee.

It was a tough start in life for the little calf, named Baghekhaiti by her rescuers, the local Assamese for “eaten or bitten by a tiger.” But she survived her injuries, and would go on to give birth to the first greater one-horned rhino (Rhinoceros unicornis) calf born in the Indian state of Assam as part of an ambitious captive-breeding programme launched by India’s Central Zoo Authority (CZA) in 2011.

“Baghekhaiti, whose right leg still bears the scar of that tiger attack, was brought to the Assam State Zoo on 10 August, 1991,” says Govinda Sharma, a keeper at the Guwahati-based zoo and botanical garden, who has been looking after the rhino since 1993. “Now she’s around 28. Since her arrival at the zoo she’s delivered two calves … So, she’s very special.”

According to the CZA, the program’s objective is to build a stock of healthy captive rhinos to serve as insurance for the future, should the species face extinction in the wild again. Two zoos have been designated as part of the program: the Assam State Zoo, and Bihar state’s Patna Zoo, where six calves have been born since 2011.

The greater one-horned rhino has made a spectacular comeback once before, thanks to global conservation efforts in Kaziranga and in Nepal’s Chitwan National Park, which together harbor about 85 percent of the species’ global population of around 3,500 individuals. But the IUCN still considers the species vulnerable, primarily due to the constant threat of poaching — a threat that underscores the importance of maintaining a genetically viable captive population. 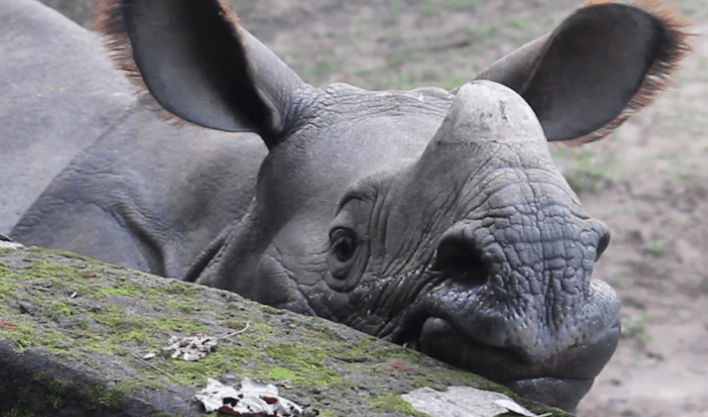 A Long History of Breeding Rhinos

Assam state, where Kaziranga National Park is located, is home to some 2,500 greater one-horned rhinos, and the state zoo has held rhinos since its establishment in 1957.

The first successful birth of a greater one-horned rhinoceros in an Indian zoo dates back to April 7, 1960, when Geeta, a female from Kaziranga taken into captivity earlier that year, gave birth to Mohan Jr. The second zoo-born calf was delivered in 1963.

But these rhinos were born from mothers already impregnated in the wild.

The first real breakthrough came in July 1963, when a female calf was born as a result of mating between two wild-caught rhinos at the zoo premises. (This was just six years after Switzerland’s Basel Zoo recorded the first ever birth of a captive-bred greater one-horned rhino in a modern zoo.)

Between 1957 and the launch of the captive birth initiative in 2011, India’s National Studbook of One Horned Rhinoceros records 13 births (including two stillbirths) at Assam State Zoo. While some of these animals still live at the zoo, others have been transferred to zoos around the world. And one female, born in 1978 and known as Geeta or Laxmi, made history in 1987 by becoming Assam’s first zoo-born rhino to give birth.

In 1979, the Assam State Zoo sent two rhinos, known as Kancha and Kanchi, to the Patna Zoo, the first rhinos to be hosted at that facility. The Patna Zoo, in turn, marked its first captive birth in 1988, with a calf born to Kanchi and a wild-caught male named Raju.

While Assam State Zoo has managed to breed rhinos in captivity since the 1960s, India’s existing ex-situ breeding efforts and facilities were deemed insufficient to maintain a viable pool of captive rhinos, triggering the formal launch of the special captive-breeding program, according to Bibhab Talukdar, an Assam-based Asian rhino expert.

With the onset of the program, the captive-breeding efforts have become much more streamlined, says Tejas Mariswamy, the director of Assam State Zoo. “We now have off-display enclosures to keep the rhinos free of stress from the contact with visitors, and more staffs attending to them. The record keeping and maintenance have improved. We are better equipped now,” he says.

There are eight rhinos under this program at the zoo. Of these, two females and one male are at prime reproductive age, while the rest are still juveniles being kept for future use in the program.

A Success and a Setback

The CZA initiative bore fruit within two years of its launch, rapid progress for a species whose pregnancies last about a year and a half. On May 11, 2013, a female calf named Dolly was born at the Patna Zoo. Then, on Sept. 1, 2013, Baghekhaiti gave birth to a male calf named Sanatan in Assam. The calf was Baghekhaiti’s second offspring, and like its older sibling it was fathered by a male named Bishnu, the first zoo-born male rhino to produce offspring in a zoo in India.

“Baghekhaiti appeared to be restless since morning on that day,” Sharma recalls of the day Baghekhaiti gave birth to Sanatan. “She didn’t eat the stack of hay and grass I’d given to her that she usually loves to munch on. We knew the day was coming, but didn’t expect that it would be that very day. In the evening at 6:43 she gave birth to a male calf … It was an overwhelming moment for us.”

“The birth of Sanatan effectively kicked off the captive breeding program,” Chandan Bora, then the divisional forest officer at Assam State Zoo, tells Mongabay. “That we were able to breed the first calf within less than two years of the launch of the programme was really inspiring.”

The zoo is now expecting the birth of its second calf under the program — and a first grandchild for Baghekhaiti. Her first calf, Pori, who was born in 2002, was observed last year mating with a wild-born male. “Now she is pregnant and expected to deliver in May next year,” Mariswamy says of Pori.

Patna, meanwhile, has seen the delivery of six calves: three in 2013 (including one that died shortly before turning two), one in 2015 and two in 2017.

In early 2018, however, the captive breeding program suffered a setback when a female calf at the Assam State Zoo sustained injuries from a male that later led to her death. Shanti, a rather small one-and-half-year-old female, shared an enclosure with two other rhinos: another young female named Bagori, and Gaonburha, a 2-year-old male. All of them were brought to the zoo in September 2017 from the Centre for Wildlife Rehabilitation and Conservation (CWRC), based outside Kaziranga National Park.

“On 12 January, 2018, Gaonburha forcibly tried to mount Shanti and in the process injured her backbone and she got several bruises. We saw her grovelling in pain. She was treated with pain-killers and other drugs. Unfortunately she did not recover,” says zoo director Mariswamy, adding that Gaonburha and Bagori were separated immediately after the incident.

While local media reported the incident to be the result of a mating attempt, Arindam Kishore Pachoni, a veterinarian at the zoo, insists that it was an act of non-breeding playful behavior and not a mating attempt. “Mating of rhinos is often a violent and raucous affair. Male rhinos do behave violently with females during mating in the wild. But this wasn’t a case of mating aggression,” he says.

He adds that they’ve been far more careful about putting rhinos together after this incident.

In a paper published in the Canadian Journal of Zoology, conservation biologists Samuel Zschokke and Bruno Baur offer three possible explanations. First, they say the infant mortality rate in the wild could be underestimated; second, the zoo environment is stressful for both laboring mothers and newborn calves; third, the wild population in Chitwan National Park is likely genetically distinct from the captive rhinos in zoos across the world, most of which are descended from the Kaziranga population.

Intriguingly, Zschokke and Baur found that the infant mortality rate was lower in inbred Indian rhino calves than in non-inbred ones. They observed that inbreeding depression, which has been observed to increase juvenile mortality rates in several other captive mammal populations, does not seem to be a particular concern for greater one-horned rhinos.

‘Knowing Your Animals is the Key to Success’

The core strength of the rhino captive-breeding program at Assam State Zoo, according to Mariswamy, is the strong bond that the keepers share with the rhinos. This, he says, evolves from “deep knowledge derived from keen and consistent observation of the animals as well as long-term association with them.”

The three keepers currently looking after the rhinos at the captive-breeding centre — Govinda Sharma, Anandi Rabha and Umesh Rajbongshi — each have more than two decades of experience in caring for the animals.

“I’ve been looking after rhinos since 1993. Building on my daily lived experience with them for so long, I know how they behave just the way I know how my pet does. I give them care accordingly, drawing on my practical knowledge,” Sharma says.

Mariswamy says while the zoo doesn’t have a formalized training program for its rhino keepers, the institution benefits from its experience of hosting rhinos for more than half a century. “What helps us is the intergenerational knowledge transfer about animal husbandry. The new keepers learn the tricks of the trade working with the seasoned hands. That’s how the knowledge is passed on. Moreover, our vets and biologists regularly update the keepers on the recent scientific knowledge about the animals.”

Though researchers at zoos elsewhere in the world have been experimenting with assisted reproductive technology (ART) in rhino breeding, Assam State Zoo hasn’t yet considered it and instead prefers natural breeding.

“In natural breeding the first critical step is choosing a correct pair,” says senior zoo veterinarian Bijoy Gogoi. “While carrying out the pairings we assess the mating suitability of the animals that takes into consideration various factors such as genetic diversity and kinship difference between the animals to be paired so that inbreeding could be avoided.

“So knowing your animals is, to a large extent, the key to success,” he adds.

“This is why we focus on developing a strong bond between the keepers and the rhinos,” Mariswamy says. “Isn’t it the best possible way to learn about the animals?”