By NewsroomJune 11, 2020Uncategorized
No Comments

According to Ulrich Roux, the attorney for controversial rhino farmer John Hume, his client had legally sold the horns to a Port Elizabeth resident in early 2019. 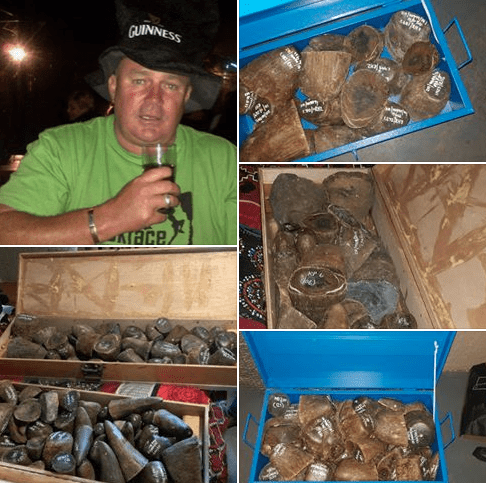 Original photographs as published by Simon Bloch on FaceBook.

But instead of the horns being delivered to the supposed buyer’s security vault company in Johannesburg, they were found in the illegal possession of Hume’s own relative Clive John Melville, also of Port Elizabeth, and an accomplice Petrus Steyn, who Hume later labeled as “agents” acting for his buyer.

How the HAWKS got wind of the deal is anyone’s guess, but I’ll wager good money that Friday’s convictions and sentencing are not the end of this investigation.

Hume, who makes no secret of the fact that he harvests rhino horns on an industrial scale, and has voraciously campaigned to have the CITES international trade ban on rhino horns overturned, was not charged in the matter.

However, according to NPA spokesperson Lumka Mohanjana, the court ordered the horns were no longer Hume’s, and declared them forfeit to the state.

The South African bust received international attention last April, when the HAWKS released a statement that the rhino horns were destined for the South East Asian markets, in violation of the CITES ban on international commercial rhino horn trade.

“An operation by the Hawks Serious Organised Crime Endangered Species Unit, Special Task force, Tracker SA and Vision Tactical landed the two suspects behind bars after information surfaced that a vehicle that from a coastal province was carrying a considerable number of rhino horns.

The duo were arrested in the Hartebeespoortdam area where the rhino horns worth a substantial amount of money were seized” HAWKS spokesman Hangwani Mulaudzi.said.

Today, more than a year after what appears to have been a shady rhino horn deal that went sensationally pear-shaped, Hume’s relative Clive John Melville and his co-accused accomplice Petrus Stephanus Steyn, pleaded guilty to charges of possession of rhino horns without the necessary permits,.and transporting the horns without the necessary permits.

When the HAWKS pounced on Melville and Steyn and the multi-million rand consignment of horns last year, the pair had booked into a self-catering bungalow near Skeerpoort.

Unaware they had been tailed, they,were already on the wrong side of the Gauteng border with North West province, and nowhere near Houghton Estate, Johannesburg. where the horns were meant to be delivered to a special safety deposit box at the Knox Titanium Vault, formerly home to the US Consulate.in Johannesburg.(in the complete opposite direction from where they had traveled)

Responding to a media inquiry about the outcome of the court case, NPA spokesperson Lumka Mohanjana said:

“Clive John Melville and Petrus Stephanus Steyn pleaded guilty to contravening section 57(1) of the National Environment Management: Biodiversity Act, 10 of 2004 for being in possession and transporting 181 rhino without the necessary permits..

Asked to explain the disproportionate sentences handed down to Melville and Steyn, she said:

“The fines are different because of different personal circumstances and role that each played in the commission of the offences”.

According to Terry Price, the defense advocate in the case, Melville made a formal admission of guilt on Friday to forging a document that the permit holder (Rossouw) had given him permission to carry the horns.

Speaking to the court-ordered forfeiture of the 181 rhino horns, she added:

“The horns have not been returned to Mr John Hume as he sold them to Mr Rossouw; therefore they will be forfeited to the state”.

(Answer) The name of a man whose name and identity details appear on a set of rhino horn permits as the buyer of 181 of Hume’s rhino horns from his multi-million dollar collection of rhino horns stored at Bidvest Protea Coin Vault, Centurion, a high-tech security vault complex where the shipment of individually weighted and numbered horns were stored.

Asked to explain how his name appeared on the rhino horn permits as the buyer, Alan Rossouw refused to discuss the case, and told the writer:

” I’m not going to discuss it.I signed a confidentiality agreement some time ago “.

Called again to inquire whether he wished to exonerate himself after it was announced Melville had admitted to forgery, Rossouw responded.

In 2017, after Hume contested the constitutionality of the domestic rhino horn trade moratorium, managing to win a court decision on a technicality, a leading South African environmental attorney warned that opening up the so-called “legal” domestic trade would be hugely problematic because it would likely be used to serve as a cover for the illegal international trade in horn, just like other rackets run by trans-national crime syndicates and Asian triads.

“As long as one unscrupulous person can get a buyer’s permit, all the horn can be channeled out through that person or entity as a nominated alternative buyer. They will find a way to corrupt any monitoring scheme and the horn will leave SA” said Cape Town attorney, Cormac Cullinan.

“Although the DEA may discover that the purchaser no longer has the horn, a purchaser may also be a legal entity such as a company. If a company buys the horn and then illegally disposes of it or is “robbed”, it may be difficult to hold anyone accountable,” he added.

Last year, Hume had attempted to claim back legal ownership of the horns, saying they ‘legally’ still belonged to him because he had not yet been paid yet,

But according to the NPA, the court wasn’t buying any of that, and declared the horns forfeit to the state.

Hume’s agents at Bidvest Protea had already handed over possession of the “merchandise” (we assume nothing gets done without Hume’s instruction, authorization and signature)

Responding to questions around possible impropriety raised in an interview last year, Hume’s lawyer Ulrich Roux maintained his client’s innocence in the transaction, claiming Melville and Steyn were only acting as agents for the ‘buyer’.

“As previously confirmed by Mr Hume, Mr Clive John Melville is the half-brother of Mr Hume’s cousin. They are accordingly not directly related” Roux said.

“I refer to Hartebeespoort CAS 86/04/2019 where two suspects have been arrested whilst in possession of 181 rhino horns which were lawfully purchased from our client. Said arrest pertains to the alleged violation of the terms of the required permits to transport the horns.

“Our client, when supplying the said suspects (Mr Clive John Melville and Mr Petrus Stephanus Steyn) with the horns set out above, was in possession of the valid selling permit number O 29886, attached hereto as annexure “A”.

“The suspects referred to above were acting in their capacity as agents for Mr Alan Rossouw, who was in possession of the valid buying permit number O 29887, attached hereto as annexure “B”.

“Furthermore, please find attached hereto the buyers’ possession permit, as well as the transport permit for the said horns.

“I would like to assure you that I only do anything with rhino horn that is permitted and we even check the prospective purchases(sic) buying permit, possession permit and moving permit.

“However once we have handed over horns we have no control of what anyone does with his horns” Hume said.

Asked to clarify Hume’s position on the deal, and whether he had done a due diligence exercise on the buyer, a set of follow-up questions, were emailed to Roux.

1
How did Mr Hume establish the bona fides of Mr Rossouw, (the buyer) to whom he sold the horns?

2
When exactly did negotiations between Mr Hume and Mr Rossouw actually begin?

3
To negotiate and complete the transaction, did Mr Hume or his representatives ever meet Mr Rossouw in person?

4
Has Mr Hume previously done any business with Mr Rossouw?

Roux failed to respond or answer the follow up questions.

The silence was deafening, even more so because I was unable to print much of what I had learned. The case was still sub-judice.

With so many red-flags raised by just this one particular case alone, serious questions now need to be addressed and answered by environment Minister Barbara Creecy about these massive security breaches at the heart of the national and provincial government departments’ rhino horn permitting system.

Since the permit system has been shown to be flawed, and open to exploitation and abuse, what procedures, checks and balances will be implemented to prevent similar permit abuse, fraud, forgery and other criminal activity?

Since the lifting of the domestic moratorium on rhino horn trade,, has there been an increase in rhino horn smuggling, and has the unbanning opened more doors and created more loopholes for criminal activity, fraud and corruption to flourish in the realm of illegal wildlife trafficking?

Over to you, Barbara Creecy.
Cheers, over and out!