By NewsroomFebruary 1, 2020Anti-poaching, Conservation
No Comments

Gold mining major B2Gold may be recognised as one of the largest gold producers across the globe but must also be acknowledged for the commitment and drive it places on leaving a positive and lasting environmental legacy in the regions where it operates.

One of the company’s most recent investments in this regard is a project aimed at helping Namibia’s local communities protect their black rhino population.

Laura Cornish spoke with Mark Dawe, MD and country manager for B2Gold Namibia to find out more about this incredible initiative. 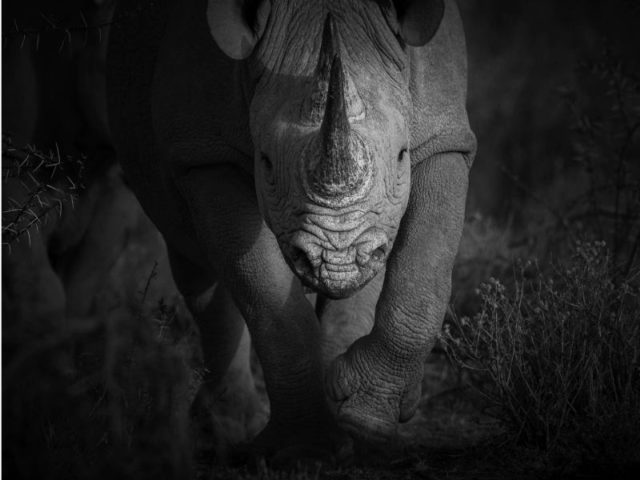 Namibia is home to the largest remaining population of black rhinos on earth. In Namibia the last free-roaming populations of black rhinos can be found. Fortunately, they live in harmony with the region’s communities who have become protectors of their welfare – and as such their own livelihood.

But protecting these magnificent animals is no easy feat. Poaching and the illegal trade in rhino horns is driven by a demand in Asia where it is believed that rhino horns can cure diseases and bestow status – which in reality it does neither.

But ancient beliefs are hard to change, and they are driving rhinos, animals that have walked the earth for more than 50 million years, to the verge of extinction.

The Namibian north western population of black rhinos roams an area of approximately 25,000 km², with no national park status, few roads and no control over who comes in or out. Despite this widespread area, the devotion of surrounding communities and local rhino-focused NGOs have ensured that not a single rhino has been lost to poaching in more than two years.

Today, a rhino-based economy has developed in Namibia’s northwest, with rhino tracking central to tourism development that in turn provides jobs, income and hope for the future.

“Because the rhinos belong to the communities, they are incentivised to protect them at all costs,” Dawe points out.

B2Gold has a strong presence in Namibia – and has been producing gold from its Otjikoto gold mine (situated 300 km north of Windhoek) since 2014. Under the leadership of B2Gold Corp.

President and CEO Clive Johnson, and local MD, Dawe, the company has since day one been determined to operate successfully and harmoniously in the region but even more importantly, give back to the country more than it is taking out.

“We take our corporate social investment initiatives very seriously and believe we are leading this effort in Namibia. We want the country’s communities to benefit from their rightful land which is suffering severe devastation as a result of the worst drought ever experienced in the country, resulting in large numbers of wildlife and livestock perishing.

“Considering the country’s natural endowment is now the only source from which to generate a livelihood in the north-west, this is beyond distressing,” Dawe reveals.

On the back of this dire situation, B2Gold has launched a ground-breaking, never-been-done-before initiative to protect the black rhino through community enabler programmes.

The company is donating 1,000 oz of gold from Otjikoto to produce 1,000 limited edition Rhino gold bars which have been designed internally. The gold bars will be refined at South Africa’s Rand Refinery and will be made available to Namibian and international investors as well as consumers looking to purchase this unique product and contribute to B2Gold’s efforts.

They will be available at the end of January and B2Gold will undertake a substantial marketing drive during the week of Mining Indaba to drive investment interest.

“This represents the first time that gold, a natural resource from the ground is being used to provide sustainable funding to community-backed initiatives for the protection of an iconic global treasure, the critically endangered black rhino. We believe this is redefining conservation financing,” Dawe highlights.

Proceeds from the sale of the Rhino gold bars will be managed by B2Gold and an advisory committee that includes representatives from Save the Rhino Trust Namibia, Integrated Rural Development and Nature Conservation, Namibia Chamber of Environment, and the Ministry of Environment and Tourism.

The funds will be used in two ways: A portion of the proceeds will be invested to provide long-term sustainable financing for black rhino conservation, while significant funding will be applied immediately to conservation actions in the field.

The target beneficiaries are the Communal Conservancies that fund patrols, intelligence activities and logistics through the Rhino Rangers programme. Most of this support will be directed through Save the Rhino Trust Namibia (SRT), Integrated Rural Development in Nature Conservation (IRDNC), the Communal Conservancies that run the Rhino Rangers programme and the Ministry of Environment and Tourism’s anti-poaching units.

This initiative will go a long way towards ensuring that the communities will be able to build and add to their success in their remarkable efforts to prevent the extinction of these animals, which they consider to be their birth right.

Dawe says the entire project was first conceptualised in 2018 and was initially aimed at developing a legal tender coin. This, however, entails a lengthy process of legal compliance that requires approval by the Bank of Namibia and the country’s cabinet.

“As a result of the crisis and drought in the country, we needed to expedite the process and opted to start with the gold bars, the concept of which we finalised in August 2019,” Dawe explains.

Following the successful conclusion of the Rhino gold bar project, B2Gold may look to continue the project by using some of the gold bar funds to produce gold coins.

“Ultimately, we see potential to produce a Namibian-equivalent to the Kruger Rand or Canadian Maple Leaf that will continue to generate funds to help the Namibian rhinos and their supporting communities in a sustainable manner,” Dawe concludes.