By NewsroomJanuary 8, 2020Conservation
No Comments

GAUHATI: Laisri becomes a grandmother – her daughter R3A has given birth to a calf at the Manas National Park in Assam and the birth of the newborn rhino warrants a celebration in the state that is presently witnessing widespread protests against the Citizenship (Amendment) Act.

The six-year-old rhino, R3A, has become a mother for the first time – the calf was born on January 4, and authorities are documenting its movement since birth. The 15-year-old grandma was brought to Manas from the Pobitora Wildlife Sanctuary.

“R3A was born to Laisri in 2013 and we are happy to see her becoming a mother now. Laisri was relocated to Manas from Pobitora through the wild-to-wild translocation procedure. The calf’s gender is not yet known – our initial observations suggest that both the mother and baby are doing well in the wild,” said Deba Kumar Dutta, Landscape Coordinator (BHL, Manas Conservation Area), WWF-India and member of IUCN/SSC Asian Rhino Specialist Group. 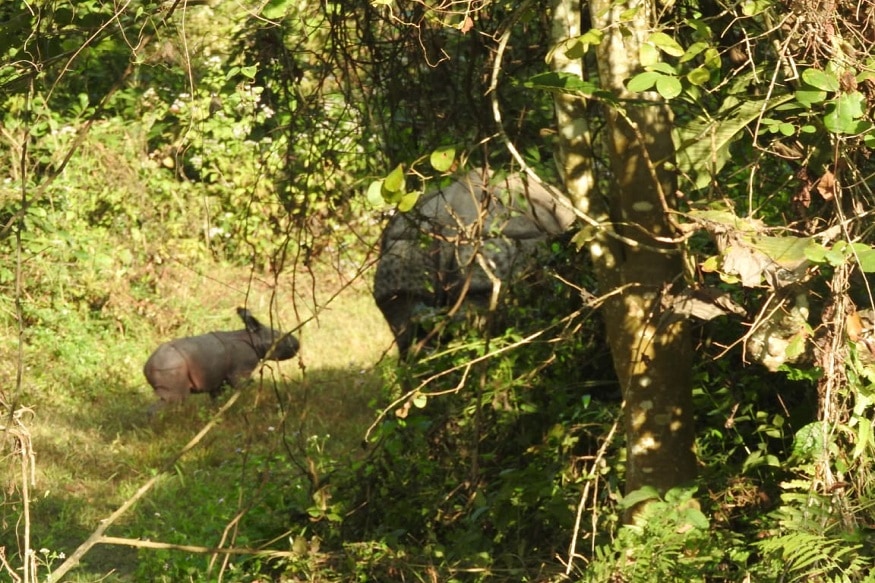 The Manas National Park that reclaimed its UNESCO (Natural) World Heritage Site tag in 2011 is now home to 42 rhinos, including the rescued and the rehabilitated. The birth of a rhino calf is seen as a big win for conservationists, and their efforts towards protection of the critically threatened one-horned rhinoceros species, the pride of Assam.

“Manas has revived because of the rhino introduction process. It has been more than a decade since we translocated two male rhinos here from Pobitora in April 2008. It was a wild-to-wild rhino translocation. In 2006, rhinos were also brought to Manas from the rehabilitation centre,” Dutta said.

In the early 80-90s, heavy poaching had wiped out the entire rhino population in Manas, where prior to 1989, an estimate of more than 100 rhinos were living.

In 2005, the Assam government with the support from the International Rhino Foundation (IRF), the World Wide Fund for Nature (WWF), the United States Fish and Wildlife Service (USFWS) and the Bodoland Territorial Council launched the Indian Rhino Vision 2020 (IRV2020) – a programme to reintroduce rhinos in protected areas – where they had fallen to poacher’s bullets.

“Translocation is the intentional release of the animal to the wild in an attempt to establish, re-establish or augment the population.

Translocation of a rhino is not an easy process, and it has to follow strict international and national protocols,” explained Dutta, adding that the rhino translocation programme has also contributed to the mixing of genes as rhinos from Kaziranga and Pobitora have been introduced in the Manas National Park.

From 2008-2012, 10 rhinos have been translocated to Manas from Pobitora Wildlife Sanctuary and eight others from Kaziranga National Park. Along with the wild rhinos, 17 rehabilitated rhinos from the Centre for Wildlife Rehabilitation and Conservation (CWRC) have been introduced in the national park since 2006.

“Two more sub-adult rhinos are soon to be translocated from Kaziranga to Manas,” Dutta said while explaining how the authorities keep a track of the rhinos in the park.

“When they were first brought here, the rhinos were radio-collared, but once they were established, they have always been wild and free. It is a natural process of monitoring that we follow. It is ID-based and also through distinctive body features or through their movement pattern. Camera trap monitoring is also done, their ranges are well identified.”

Tourism was almost non-existent or limping in Manas from 2003-2008, but with the revival of the national park, there has been a giant increase in Assam’s tourism revenue. Till 2018, the revenue collection by Assam government stood at almost Rs 1 crore. The boost in tourism has also offered livelihood opportunities to the fringe community.

The increase in rhino population has further led to an increase in tiger and elephant population. At present, as many as 30 tigers are living in Manas National Park and Tiger Reserve, with the state government using the M-STrIPES (Monitoring System for Tigers – Intensive Protection and Ecological Status) application for better monitoring, surveillance and conservation of wildlife.