By NewsroomApril 25, 2020Conservation, Rescue and rehab
No Comments

A massive search is on in the Kaziranga National Park (KNP) to trace the mother of a one-month-old rhino male calf, who was rescued by forest guards on Sunday.

The calf was spotted by villagers at Deopani area, near the National Highway 37 outside the boundary of the Bagori range of the national park around noon on April 19, following which they alerted forest guards.

As the mother has still not been traced, the calf has now been kept at the Centre for Wildlife Rehabilitation and Conservation (CWRC), run by the Wildlife Trust of India. The centre is located near the national park. 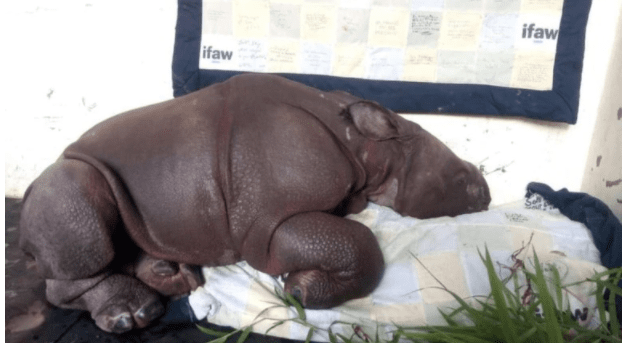 Original photo as published by India Today. The rhino calf spotted by villagers outside the boundary of the Bagori range of the Kaziranga National Park on April 19. (Photo:Twitter/@kaziranga_)

Every year, the CWRC handles several baby rhinos and elephants rescued during annual floods that submerge the national park. “It’s a very rare phenomenon for rhino. The mother generally doesn’t leave her calf unattended because rhino mothers are very protective. Park guards carried out a massive search for 48 hours. It’s unusual that the mother has not come looking for the calf,” says Rathin Barman, Joint Director, Wildlife Trust of India.

Some wildlife experts, however, say mothers may move away from the baby to protect it from injuries when an adult male in heat approaches her.

Spread across 430 square kilometres, the national park in Kaziranga, is the biggest habitat of one-horned rhinos in the world. It is home to more than 2,400 rhinos.

The one-horned rhino is listed as ‘vulnerable’ on the International Union for Conservation of Nature (IUCN) Red List. The KNP often makes headlines for regular instances of poaching. The KNP authorities have, however, ruled out the possibility that the mother could have been killed by poachers. “The mother stays near the calf. So we would have found the carcass if she had been killed,” a park official said.

In January, P Sivakumar, the director of Assam’s Kaziranga National Park claimed that the number of rhinos poached in the park in 2019 was the lowest in 10 years. Three rhinos were killed under the park limits in 2019, a sharp decline from 12 in 2016.