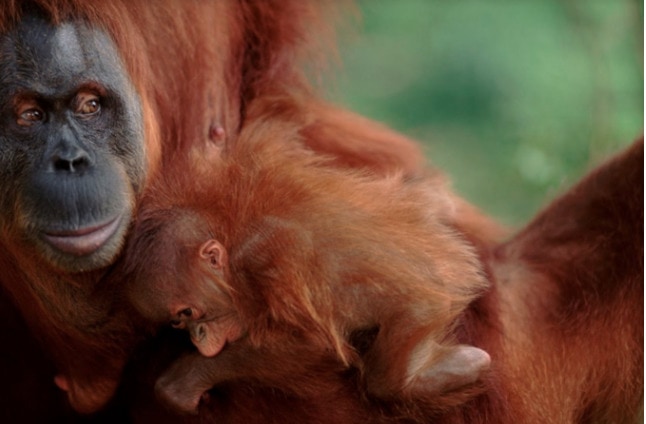 The population of orangutan has been threatened due to illegal hunting, habitat destruction and wildlife trade. (Photo: naturepl.com/ Anup Shah/WWF as originally published by the Jakarta Post.)

Read the original story here.
Despite being the fourth most lucrative trade globally, illegal wildlife trade (IWT) is often overshadowed by more prominent criminal ventures, such as drug trafficking and arms dealing. It is estimated that US$26 billion is made yearly at the cost of our natural environment, fueling corruption, and damaging the reputation and economies of the affected countries.

Financial Action Task Force (FATF), the global money laundering watchdog, recently released a report into the matter, which makes it clear that organized crime uses the wildlife trade to exploit weaknesses in the financial and non-financial sectors, to move, hide and launder their proceeds Asia in particular, is deeply entangled in wildlife trafficking due to its rich biodiversity, high demand for illegal wildlife products and strong transit points. While China is the largest receiver of wildlife items, Cambodia, Indonesia, Singapore, and Hong Kong are also prominent end destinations.

In recent years, more than 200 tons of African elephant ivory has been seized in the Southeast Asia region alone. This amount represents about 3,000 dead elephants and sadly, while these seem like staggering numbers, they are just a mere fraction of the trade brought to light by successful seizures. The methods for trafficking wildlife, and the inevitable money laundering that is involved, are hardly new. Tactics such as mingling illicit proceeds with legal ones, mislabeling shipping containers, and forging documents, are used by criminals to move, hide, and launder their proceeds. Hence, this also becomes a dimension of the wider trade-based money laundering problem, because from that perspective there is no difference between the content of a container being forged goods or ivory, or between people wanting to earn illicit money through trade fraud or selling powdered rhino horn.

To crack down on IWT, it’s important to understand how it works. Here are some of the facts: Trade routes are as global as those for any other illicit trade. According to Europol, the EU is a major transit point between Africa and Asia, and perhaps more importantly, the European fashion industry accounts for a whopping 96 percent of the python skin trade. If we’re looking at the trade of live animals such as tropical birds or snakes, the trade might very well be just between South and North America. The United Nations Office on Drugs and Crime (UNODC) has found that both the countries of origin and destination are often unknown, as seen in the diagrams.

While IWT does involve poaching of many iconic animals, it also involves various species that most people probably never heard of, such as glass eel smuggling from the United States. Following the financial trails of wildlife traffickers is one of the most effective ways to identify broader criminal networks. The responsibilities that financial services organizations have to detect, and fight money laundering also apply to illegal wildlife trafficking. Here are some of the key things banks should know: IWT risk must be part of a bank’s risk framework and their antimony laundering risk assessment, e.g., by adding high-risk sources (Africa, South America), transit (EU), and destination countries. Additionally, high-risk industries such as medical and leather goods companies but also general trading companies.

Keeping an eye out to ensure transactions types match profiles is a good first step. Shell or front companies are often used to ship wildlife or launder the proceeds. Customer due diligence to identify shell companies should also cover IWT though the same challenges often apply — just like other items like counterfeit goods, wildlife trade Items are sold under wrong goods description like food, plants, or medicals. Wildlife trafficking red flags have been identified and summarized based on available information (see page 60 of the FATF report on IWF).

Work is underway to enhance these, particularly via the United for Wildlife’s Financial Taskforce, and FATF encourages more investigations. For example, check for increased volume of wire transfers from/to the source, transit and destination countries in combination with the high-risk industries, and also if the volume of the payment is not in relation with the type of business, e. g., schools, academies, game parks.

Unfortunately, ASEAN countries continue to play a major role in exacerbating IWT. Bans on items such as pangolin scales and elephant ivory are not enough to quell demand. Organizations such as wildlife trade monitoring network TRAFFIC are hence urging authorities to break the grip of illegal trade chains and networks through harsher penalties. Greater collaborative efforts by governments and the private sector need to be fostered to follow the money trail and track the kingpins of criminal organizations.

This is where technology can help – using machine learning and artificial intelligence (AI) to go beyond rules-based systems and simple red flag indicators in order to appropriately detect the complex behavior associated with IWT. AI models can uncover the relevant behaviors, including identifying outlier behavior never seen before. For example, by using more spatial and temporal data, machine learning models can help find local park rangers or policemen accepting bribes more easily. They may identify unusual spending behavior coupled with the vicinity to high-risk areas for IWT.

Alternative payment providers such as mobile money companies might be able to incorporate geodata from cell phones to uncover suspicious behavior. Overall, the good news is that we have seen more banks expanding the use of their technology to better monitor correspondent relationships or their trade finance products, and this is a positive step in helping to stem the tide of illegal wildlife trade.

The writer is FICO’s compliance lead in Asia Pacific.