By NewsroomSeptember 10, 2019Anti-poaching, Education
No Comments

The Namibian short film ‘Baxu and the Giants’ tells the story of how rhino poaching triggers social change in a village in Damaraland, as seen through the eyes of a nine-year-old girl, Baxu (played by Camilla Jo-Ann Daries).

The film was commissioned by the Legal Assistance Centre (LAC) with the aim of sensitising teenagers to the issue of poaching in Namibia.

Baxu is in touch with nature and tradition but toughened by life in poverty. Her name is short for !Khubaxu, which means ‘I come from the soil’.

“We quickly fell in love with Baxu and her way of seeing the world,” says director and co-writer Florian Schott (‘Katutura’, 2015).

Finding the perfect actor to play Baxu was challenging. The team auditioned almost 50 girls at public auditions, and through visiting schools and churches. “We finally found our perfect Baxu in Camilla.” 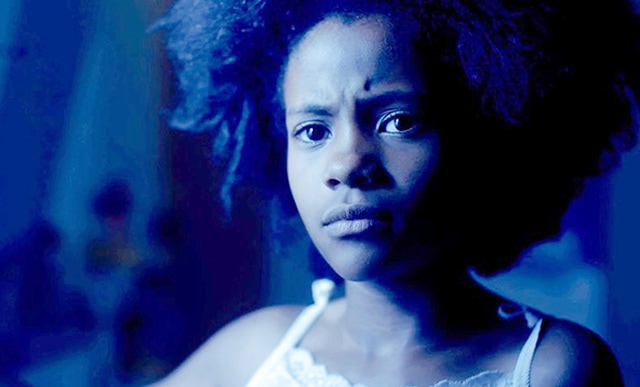 Original photo as published by The Namibian: FROM THE SOIL … Nine-year-old Camilla Jo-Ann Daries stars as Baxu. (Photo: Baxuandthegiants.com)

Baxu lives with her street-smart older brother Khata (Wafeeq /Narimab) and alcoholic grandmother (Anna Louw) in a village. Their lives are peaceful until strange men show up and cause change in the village. First, their neighbour starts acting suspiciously, then Baxu notices changes in her own household.

Keen on finding out what Khata is hiding from her, Baxu investigates and learns that her brother started poaching in order to improve his family’s living conditions. Baxu has to make a tough decision – will she stay quiet or will she listen to the rhinos, the giants of the savannah, who she talks to in her dreams and risk losing the people she loves the most?

Producer Andrew Botelle (‘The Power Stone’, 1999) enlisted Schott and co-producer/co-writer Girley Jazama (‘The White Line’, 2019) to craft an emotional story out of this difficult issue.

“Making this film was a beautiful, informative and emotional process. We travelled, we met people, and everybody that came into contact with our story and our young heroine helped in some way. Many people worked hard on bringing Baxu and her story to life, and out into the world,” says Schott.

Through storytelling which spans the time between the age of hunters and gatherers until today, the aim is to reach an audience worldwide and for audiences to understand some of the underlying social issues in rural Namibia that can lead to poaching.

“With this film, we aim to create a discussion around wildlife crime. And to highlight one of the roots of the issue – a lack of perspective and opportunities for young people in the villages in rural Namibia. And – hopefully – this film can be part of the change and inspire the youth to be the generation that ends rhino poaching,” says Schott.

According to statistics from the Ministry of Environment and Tourism, the Namibian black rhino will go extinct by 2026 if wildlife poaching continues at its current rate.

“With ‘Baxu and the Giants’, we want our audiences to realise that by committing a wildlife crime, we are stealing from ourselves and giving to the greedy something that is precious. Baxu’s message is a strong and inspiring one – it shows that poverty should never be used as an excuse to commit wildlife crime,” said Willem Odendaal from the LAC.

Schott will represent the film and highlight the issue of poaching in southern Africa at the world premiere at the San Francisco Independent Short Film Festival in the United States on 14 September.

The Namibian premiere will take place at Ster-Kinekor, Grove Mall in Windhoek on 19 September.

For more information, visit Baxuandthegiants.com and follow the film on social media.