At the first local screening of the short film, Baxu and the Giants, a substantial amount was raised for the Save the Rhino Trust. This donation was presented to the trust earlier this week.

Baxu and the Giants is a locally produced film that dwells on the impact of rhino poaching from the perspective of nine-year-old Baxu. The film was directed and co-written by Florian Schott with Camilla Jo-Ann Daries in the lead role. The producer is Andrew Botelle assisted by Girley Jazama as co-writer and co-producer. The film relies less on dialogue but conveys a very powerful message through it striking visual composition.

The local screening in the Aula of Deutsche Hoehere Privatschule (DHPS) on 26 September followed just a few days after the film’s international premiére. This event was organised by the DHPS Alumni Association in cooperation with the Namibian Scientific Society and the Namibia Environment and Wildlife Society. 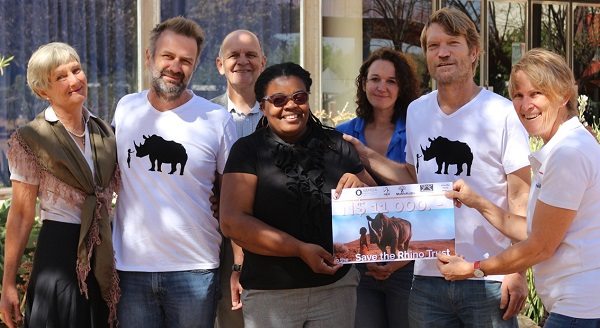 The hosts decided that all the proceeds must go to the Save the Rhino Trust and on 08 October the trust’s chairperson, Maxi Louis received the donation on behalf of her organisation at a function at DHPS.

“I had the privilege of attending the screening of Baxu and the Giants at DHPS. It was incredibly encouraging to witness the passion and interest that Namibians have for rhino conservation”, said Andrew Malherbe, the trust’s Operations Executive. “These animals are without doubt part of our national heritage and the generosity shown by the decision to donate all proceeds to the Save the Rhino Trust is an acknowledgement of this. Our work at [the trust] is 100% dependent on donor funding so on behalf of the entire organization, a big Thank You!”

The trust said in a statement that further contributions are highly appreciated and can be transferred directly into their bank account at Nedbank.