Beating illegal wildlife trade tests our resolve to save the Earth

By NewsroomJanuary 23, 2020Anti-poaching, Conservation
No Comments

The Duke of Cambridge and William Hague, The Telegraph | January 21, 2020

Over recent years the degradation of our natural environment has rightly climbed the public agenda. As Sir David Attenborough warned last week, “the moment of crisis has come”. Our collective efforts are urgently needed to maintain the world as we know it: we must move away from the prevailing blend of pessimistic fatalism to one of optimism and action. Over the new year, The Earthshot Prize was announced to help do just that. Its aim is to inspire Earth’s greatest problem-solvers to solve Earth’s greatest problems.

But unlike so many of the challenges to achieving more sustainable living across the world – for which innovation and invention is clearly required – we already have the solutions to one vital aspect.

Five years ago, we identified the illegal wildlife trade (IWT) as conservation’s “elephant in the room”. As the fourth most profitable criminal global enterprise in the world, trading everything from rhino horns to pangolin scales, it continues to deplete our most precious wildlife.

Given its links to corruption and the trafficking of arms, narcotics, people, and even terrorist financing, IWT is unquestionably an intolerable crime, for both its conservation and human consequences. The criminals who plunder the world’s natural resources are also trapping its most vulnerable communities in poverty, denying future generations the right to economic and social development. 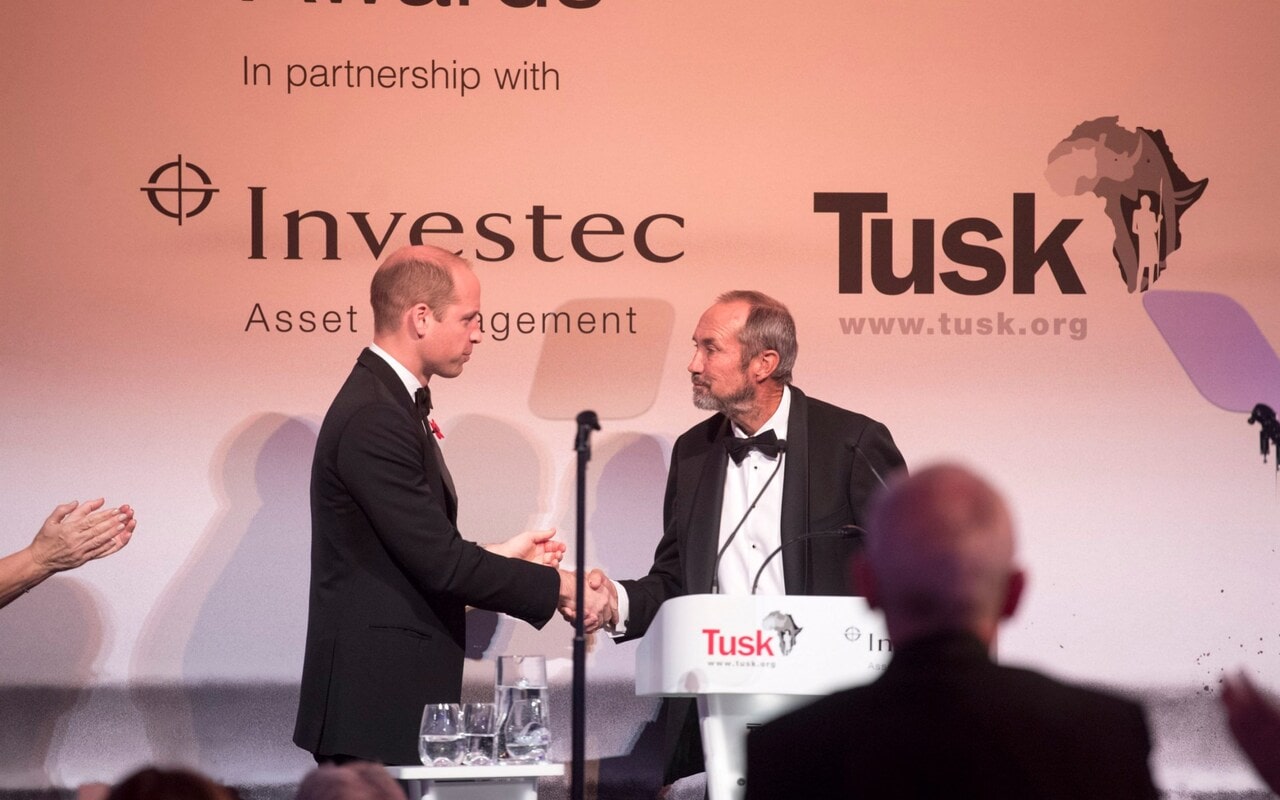 Original photo as published by The Telegraph: Prince William with winner Dr Peter Morkel at the Award for Conservation in Africa in 2018. (CREDIT: PAUL GROVER)

That is why, in 2014, we formed a Transport Task Force, to engage the transport sector in identifying and developing solutions to wildlife trafficking. In 2018, we broadened that work to include the financial sector because for every wildlife product sourced illegally, money changes hands.

This is beginning to have a material impact. Task force members have been integral to more than 70 law-enforcement investigations, the interdiction of 108 shipments (with a fourteen-fold increase last year), as well as arrests of 18 prolific traffickers, and the disruption of a major ivory, rhino horn, and heroin syndicate in East Africa.

In both Africa and Asia new regional centres of expertise have been created, bringing together local members to collaborate on specific initiatives, share intelligence and tailor good practice. Consumer awareness campaigns have reached millions, while tens of thousands of employees have been trained to detect and report signs of the trade, whether at ports and airports, or the cashier desks of banks. It is now considered business as usual for transport companies to track down illegal wildlife products in their cargo and for banks to investigate and freeze the assets of the perpetrators.

The Financial Task Force has created categorisations for use within existing compliance frameworks and is developing new methodologies to identify suspicious transactions. In the Transport Task Force, systems for the automatic screening and detection of illicit shipments, employing machine-learning algorithms, are being trialled and the mechanisms for sharing data with enforcement authorities developed.

But now is not the time to sit back and celebrate our success. The stark fact remains that 60 per cent of the world’s wildlife has been lost in the past 50 years and the process is accelerating, not just through destruction of habitat but under increasing pressure from this evil trade. Killings of rhinos occur at a rate of four a day, 24 times that in 2006.

We must redouble our efforts, and apply the lessons of the past five years.

First, that we cannot seize or arrest our way out of this problem. Instead, we must close down markets – already achieved by several countries for ivory – while also reducing the demand for such products through wholesale attitudinal changes to wildlife.

Second, that IWT’s convergence with so many other criminal activities is not only further justification for its eradication but can also serve to motivate co-operation with some of the world’s most effective law enforcement agencies, such as the United States Fish and Wildlife Service.

Third, that things are improving: we have engaged with countless individuals and companies genuinely committed to doing their part to counter IWT and find that their words are increasingly backed by the everyday deeds of their business practices.

Fourth, that public-private co-operation is not just possible but vital. Law enforcement has acknowledged the contributions of business and is embracing these new relationships.

Fifth, and most importantly, that despite these efforts, the scale and immediacy of the threat to wildlife is far greater than can be addressed by the actions of even such a committed and active coalition.

So on Tuesday we convened United for Wildlife’s joint task forces in London, alongside the Government’s Africa Investment Summit.

We set a new three-year goal to mount the most intensive campaign yet to mobilise business, with the ambition of making it impossible to use private-sector infrastructure to facilitate the financing and transportation of IWT products with impunity.

This can only be achieved through a step-change in the adoption of measures being developed within established business practice.

IWT commitments are already being incorporated within transport accreditation frameworks such as the International Air Transport Association (IATA), which has transcribed United for Wildlife’s commitments into its Environmental Assessment Programme.

They can also be used to complement existing regulatory regimes, such as making countering IWT a focus for the Chinese presidency of the OECD’s Financial Action Task Force (FATF), which recently convened its members in Beijing to start developing assessment criteria for use across its 205 jurisdictions.

Finally, making real change will involve amplifying consumers and investors’ growing insistence that business also fulfils a social purpose, so as to entrench a shared determination to root out this crime.

This year has the potential to generate much-needed momentum on wider environmental recovery (not least the UN’s summits on Biological Diversity and Climate Change). But unless we fail to galvanise both business and the public, 2020 risks becoming another missed opportunity – which for some of the most iconic species may be their last.

Their destruction cannot be allowed. They can be saved and working with others we are going to do it. We must all act – united and with great urgency – because defeating the illegal wildlife trade is not just a pressing challenge for conservationists, but a fundamental test of humanity’s resolve to save the Earth.