Bid to boost tourism: Rhinos to be re-introduced in Uttarakhand (India)

By NewsroomDecember 21, 2019Conservation
No Comments

The Uttarakhand State Wildlife Board has cleared a proposal by the Wildlife Institute of India (WII) to introduce rhinoceroses in the Corbett Tiger Reserve (CTR) to boost tourism and revive the habits of species that survive on low-height grass.

According to officials, around 10 rhinos will be brought in CTR in the first phase and subsequently, 10 more would be added.

State Chief Wildlife Warden Rajiv Bhartari said that a proposal will be sent to the Cente soon in this regard to transport rhinos from either Assam or West Bengal or both. The capture and translocation are likely to cost about Rs 15 lakh per individual animal.

Experts claim that protecting these rhinos from poaching will be the only challenge for the state’s forest department staff after the move.

They added that the geographical terrain and environmental conditions in CTR are suitable for rhinos. The ideal sites chosen in Corbett are valley habitats bounded on either side by the lower Himalayas (north), Shivalik Hills (south) and the Ramganga Reservoir (east), which would also act as natural barriers to rhino movement outside these area, thereby minimising conflict with people. 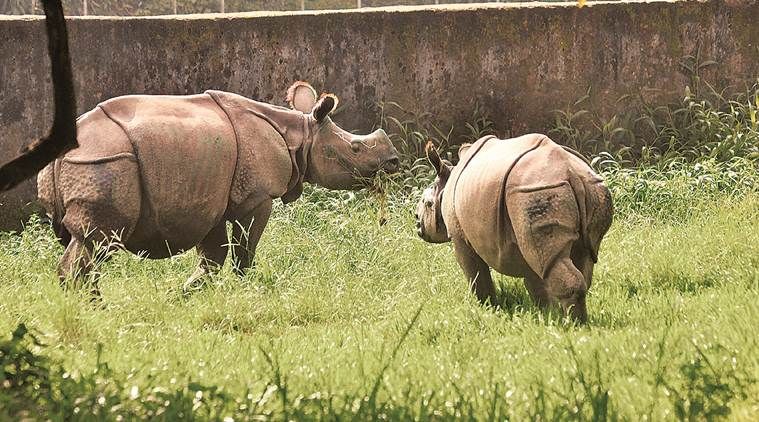 WII Dean YV Jhala said rhinos were once found in the Terai grassland in the state and adjoining areas but were wiped out by poaching. The horn of a rhino is believed to be an aphrodisiac. “Corbett is well protected and hence the rhinos will safely survive there,” Jhala said.

Experts say that each of the founding population animals would be fitted with a GPS radio-collar. A team of researchers would be allocated for monitoring their ranging patterns, foraging habits, demography and habitat use. The Forest Department would be responsible for the safety of these re-introduced rhinos. Researchers will share data with the department’s staff.

“There are less challenges in re-introduction of rhinos. The animals only have to be brought her. Food and water are available,” Jhala said.

According to wildlife experts, rhinos reduce the size of elephant grass by eating it. This would mean that species that thrive on lower-height grass — Hog Deer, Cheetal, Sambar and Swamp Deer, among others — would also be encouraged.

According to WII experts, the rhino’s range was once continuous across the flood plains of the Indus, Ganges and the Brahmaputra, but today, it is limited to small fragmented pockets in India and Nepal as a result of anthropogenic pressures. Re-introduction into habitats in its historic range would not only create safety-net populations for the species but also restore their ecological role in these faunally-degraded habitats, they said.

“The majority of the decline in rhino population in the state of Assam occurred during the period of political unrest. Similar trends in population decline were observed in Nepal during the Maoist movement. Uttarakhand has no such history of political instability and thus would be an ideal site for reintroduction,” the WII proposal reads.