JAKARTA: Scientists attempting a last-ditch attempt to breed the most threatened rhino species on Earth say they’re not hopeful about their latest effort, blaming government inaction for holding back their chances of success.

The scientists earlier this week managed to harvest a single egg cell from Malaysia’s last living Sumatran rhino (Dicerorhinus sumatrensis), named Iman. That effort was led by Thomas Hildebrandt of Germany’s Leibniz Institute of Zoo and Wildlife Research, in collaboration with the Borneo Rhino Alliance (BORA).

Extracting egg cells from Iman had to be carried out with extreme care since the rhino is still recovering from a ruptured tumor in her uterus. The team caring for the rhino believed she was still fertile and producing viable eggs, or oocytes, with assistance.

“In this case, only one follicle could be found, and it turned out that only one egg cell was retrieved,” John Payne, the head of BORA, told Mongabay in an email. “Iman recovered quickly and spent most of the following 24 hours in her forest paddock, coming back to be fed twice in her night barn.”

On Oct. 1, Arief Boediono, a professor from Indonesia’s Bogor Institute of Agriculture, performed a procedure at University Malaysia Sabah to inject sperm into the egg. The sperm came from Malaysia’s last male rhino, Tam, who died this past May but whose semen had been collected in 2015 and 2016 and preserved in liquid nitrogen.

Payne said the scientists were waiting to see “if the in-vitro attempt had been successful,” in which case the fertilized egg would be preserved in liquid nitrogen pending the availability of a surrogate mother. But Payne said the chances of success were low.

“The prospects are not bright, with only one egg and poor quality sperm,” he said. Tam’s age would have been around 60 years in human terms when his sperm was harvested, Payne noted.

The fact that the team had to rely on “poor quality” sperm from a single aged rhino has highlighted the lack of progress on an agreement between Malaysia and Indonesia that would have allowed Iman’s eggs to be fertilized with healthy sperm from one of Indonesia’s rhinos. 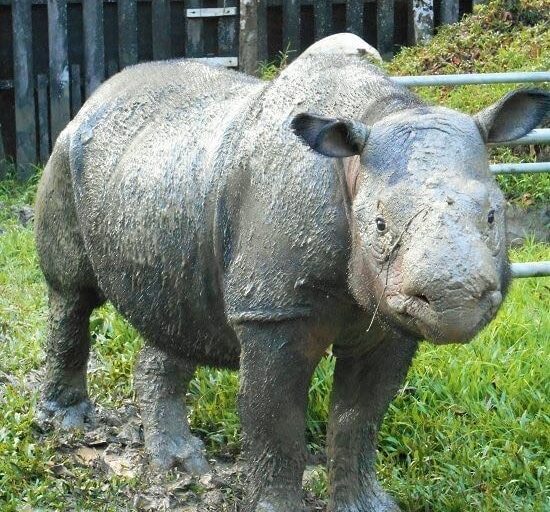 Original photo as published by MongaBay: Iman is now one of two remaining captive Sumatran rhinos in Borneo (the other is held in Indonesian Borneo). A tumor in her uterus ruptured in 2017. Scientists say they don’t believe she can carry a baby to term, but her eggs could still be used in IVF attempts. Image courtesy of Sabah Wildlife Department.

“It would have been much better to use semen from any one of those males, for a better chance of successful fertilization,” Payne said.

A previous plan to send rhino sperm samples from Indonesia to Malaysia never came to fruition because the Indonesian government balked at Malaysian requests that artificial insemination efforts be carried out in facilities in Malaysia.

In August, Indonesia’s environment ministry said the two countries had agreed on a new partnership that would see eggs shipped from Malaysia for in vitro fertilization (IVF) attempts in Indonesia. To date, however, the paperwork to finalize the deal has still not been completed.

Indra Exploitasia, the director of biodiversity conservation at Indonesia’s environment ministry, welcomed the news of the successful egg harvesting from Iman, but reiterated that neither eggs nor sperm could be exchanged between the two countries until the paperwork was done. She said Indonesia and Malaysia would need to sign a memorandum of understanding for an exchange of specimens of protected species, the transfer of which is regulated under the Convention on International Trade in Endangered Species (CITES) and the Convention on Biological Diversity (CBD).

Payne, however, said Malaysian CITES officials had confirmed to him that an MOU was not necessary for a permit to be granted allowing the exchange of samples. He said the Malaysian state of Sabah, where Iman is held, had also not insisted on an MOU being signed in order to send an egg from Iman to Indonesia.

“In the interests of preventing a mammal genus extinction, no one should be quibbling about an MOU,” Payne said.

No more than 80 Sumatran rhinos, a critically endangered species, are believed to survive in the wild, often living in small populations too small and isolated to be reproductively viable. Nine rhinos are held in sanctuaries in Indonesia and Malaysia, where experts have been attempting to breed them. Two calves have been born after being conceived naturally at the Way Kambas facility in Indonesia, but several previous IVF attempts in Malaysia have been unsuccessful.