By NewsroomMarch 19, 2020Anti-poaching, Conservation
No Comments

Vietnam’s prime minister, Nguyen Xuan Phuc, has asked the country’s agriculture ministry to draft a directive to stop illegal trading and consumption of wildlife over fears it spreads disease.

The directive, seen as a victory for animal rights organisations, will lead to a clamping down on street-side markets dotted across the country, increase prosecutions of online traders and ideally put pressure on thousands of farms with known links to illegal wildlife trading.

Vitenam’s move to ban the wildlife trade follows similar moves by the Chinese government, after the new coronavirus pandemic appeared to have emerged from a wet market in Wuhan. 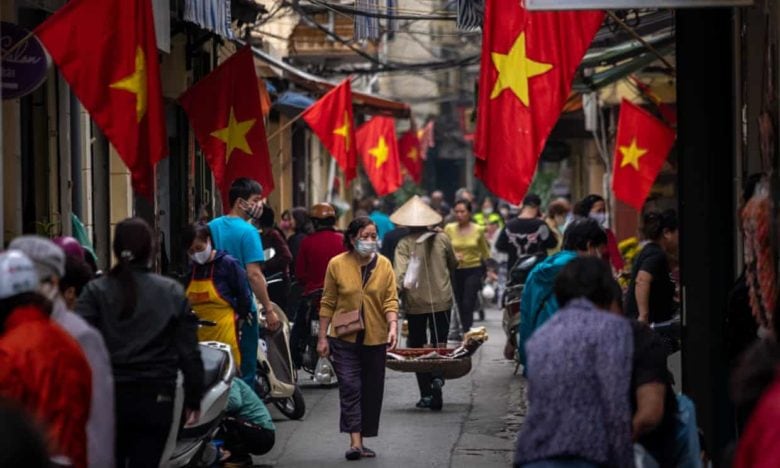 Original photo as published by The Guardian: Shoppers wear face masks at a market in Hanoi. Photograph: Linh Pham/Getty Images

Both illegal and “legal” wildlife trading flourishes in Vietnam, where the trade has grown into a billion-dollar industry. There are thousands of markets around the country, many of which include stalls selling animals for food or as pets. Anyone walking around some of the street-side stalls of the Mekong delta can see fish tanks stuffed with sea turtles or skinned-alive frogs.

There is also a thriving online trade in animals. Many sellers advertise on Facebook, uploading photos of leopard cats caught in mesh nets, dead pangolins stored in a freezer, slaughtered macaque monkeys, frozen tiger cubs, butchered bats or even freshly barbecued wildlife. They are bought as status symbols, pets, food, or to be used in traditional medicines.

Yet the largest issue in terms of Vietnam’s wildlife trade is the nation’s “legal” commercial farms, where you can see maltreated civets in metal cages or an array of rare reptiles. Across Vietnam, bears are still trapped in tiny cages on bear bile farms, while Nghe An province in central Vietnam is known for tiger farms.

“Opportunistic farmers can legally acquire licences for a plethora of species. Some of these species are incredibly difficult to raise in captivity while others are not economically viable to raise and sell profitably, but it has not been a common practice to involve third parties in the process of licensing farms, so the authorities are issuing permits to trade native species that can only be sourced from the wild,” Douglas Hendrie, director of enforcement for local environment NGO Education for Nature Vietnam (ENV) told the Guardian.

“Additionally, in some cases farmers can get away with trading completely protected species which are not even allowed to be farmed due to authorities lacking education on species protection. With such a poorly regulated and enforced commercial wildlife farming industry few fear prosecution.”

“Animals from these farms and ‘conservation’ facilities are then sold via a huge ‘legal’ industry to businessmen, restaurants, traditional medicine shops and even across the border into China,” Hendrie added.

On 20 November, Vietnamese authorities investigated a wildlife farm and temporarily seized 57 animals from 19 different species, the Guardian has learned. In this case, the owner was caught in possession of more than 10 species protected by law – a criminal offence punishable by up to 15 years in prison. It is this diversity of species – as seen in Wuhan’s wet market – that can lead to the spread of disease.

According to Hendrie, online trading has grown in appeal as sellers can hide their identity while reaching more buyers. Entire Facebook pages are dedicated to ivory, rhino horns and bear claws or posting photos of animals being caught or slaughtered. Last year ENV recorded more than 2,400 advertisements in violation of wildlife protection laws on Facebook, YouTube, Zalo and other online platforms, along with more than 600 people caught illegally possessing wildlife.

Vietnam began recognising protected wildlife species listed by Cites (the Convention on International Trade in Endangered Species of Wild Fauna and Flora) in 1994. Currently, Vietnamese law prohibits the trafficking of protected wildlife products, such as pangolins or rhinos, and the illegal trading or killing of wildlife. Yet campaigners say the illegal trade continues to flourish thanks to poor enforcement. Convicted criminals can face imprisonment or a fine of more than $600 (£500).

Hanoi-based wildlife NGO Pan Nature recently sent a letter to the prime minister’s office – signed by 14 other environmental NGOs including WWF, Animals Asia, ENV and Traffic – calling on authorities to close markets and other locations where illegal wildlife is on sale. And the prime minister has now asked Vietnam’s agriculture ministry to draft a directive and present it by 1 April.

“We welcome the proactive response from the prime minister with specific guidance to relevant agencies for drafting the directive to completely ban illegal wildlife consumption and trade in Vietnam,” he said. “We hope to see Vietnam as a country free of illegal wildlife trade in a very near future. We expect unanimous actions of government agencies in enforcing wildlife protection laws.”

The exact actions made possible by the new directive will become clear when it’s presented at the beginning of April. The 14 NGOs that signed the letter are pushing for the closure of wildlife markets, increased policing of online sales and an end to permits for transporting large quantities of wildlife.

Any suspicious shipments, they say, should be reported to police, while large deliveries of “legal” wildlife should be investigated to determine whether laundering was involved. If there is evidence of crime, farms’ licences could be revoked and sentences of up to 15 years handed out.