By NewsroomJanuary 7, 2020Conservation
No Comments

The birth of a rhino calf — a descendant of Bella, a rhino poached less than two years ago — has been welcomed at Kragga Kamma Game Park in Port Elizabeth.

“Having a new little calf born here certainly goes a long way to healing the hurt,” the owners of the park announced on their Facebook page over the weekend.

The not-so-little girl was born on Friday — an exciting discovery made by two lucky guests on a self-guided game drive, reported HeraldLIVE. They then quickly alerted park management. 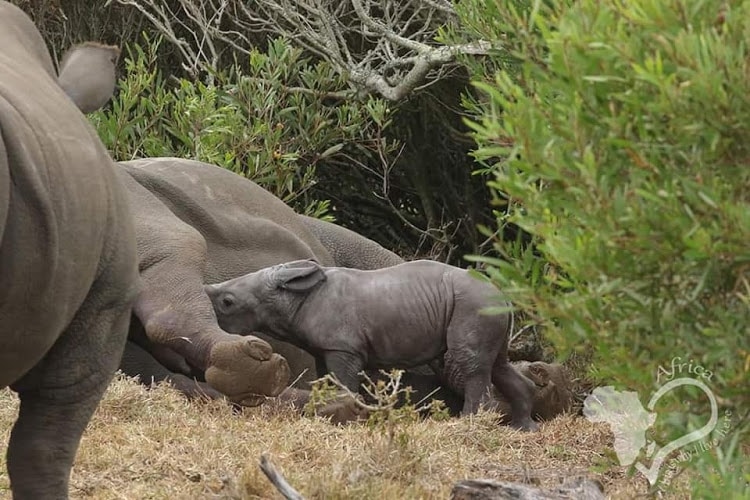 At just two days old, with her legs still wobbly, the adorable new addition is thriving. Photographs posted on social media of her nursing, trying to stand and even having a poo have captured the hearts of animal lovers countrywide, with messages of adoration flooding in. The new addition is the daughter of Bembi, who was left orphaned when her mother Bella was poached in June 2018, just six days after she had been dehorned.

Park co-owner Ayesha Canter said added security had since been implemented at the park to protect their rhinos.

At the time of Bella’s poaching, Bembi had been nursing her own calf, Bonnie – but then took Bella’s orphan, Tank, in as her own and nursed him too.

“She is indeed a supermom!” said the park. Following the initial post, the park posted two more sets of photographs – one which showed that the new addition was a girl and another cute post of the little lass setting about her ablutions.

The photographs were shared hundreds of times, with people swooning over the new “celebrity”.

“She is so tiny. We saw her yesterday. Was a big treat,” posted Susan Ochse. “We were there today . . . so heartwarming to see how beautiful the new pink feet are, and mommy and even daddy taking good care of the family member,” wrote Arenda van der Merwe.

Fans of Kragga Kamma Game Park have flooded social media with suggestions for a name, including Karma, Beatrice and Skye.

Bella’s story touched hearts across the nation when she was killed in mid-2018, just a week after she was dehorned by wildlife vet William Fowlds in an effort to protect her.

Bella is believed to have been shot with a high-calibre hunting rifle. She was the ninth rhino to be killed by poachers that year so far. After she was killed, the stump left after her dehorning was brutally hacked from her head.

Just a week before her death, a picture of a toddler gently kissing the sedated giant went viral.