By NewsroomApril 9, 2020Conservation
No Comments

Now a Victoria University study suggests this Indigenous name rings true: oxpeckers act as a sentinel-like first line of defense for critically-endangered black rhinos by calling out when they detect advancing poachers.

By tracking black rhinos in South Africa, behavioral ecologist Dr Roan Plotz found that rhinos carrying oxpeckers – which feed on the ticks and lesions found on rhinos– were far better at sensing and avoiding humans than those without the hitchhiking bird.

“Black rhinos have large, rapier-like horns and a thick hide, but they’re as blind as a bat. Hunters approaching from downwind could walk within five meters and not be noticed,” he said. 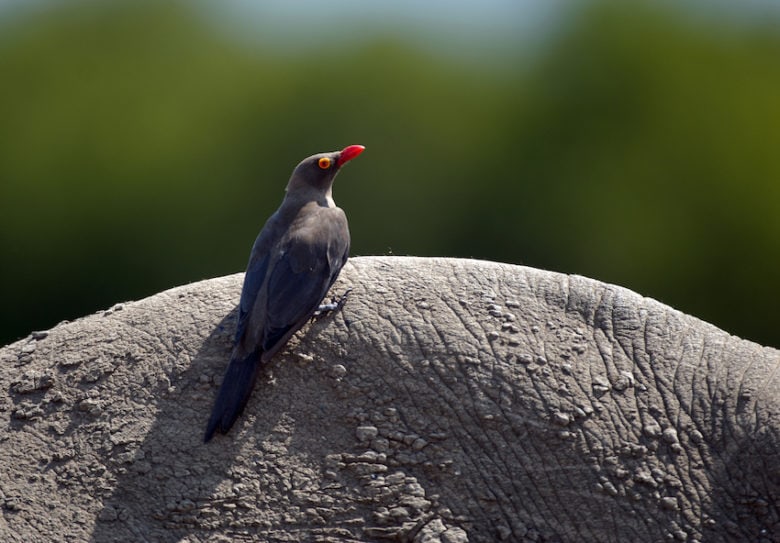 Original image as posted by Have a Go News: Close up of Oxpecker on a rhino

Dr Plotz used an experimental human approach trial to show that oxpeckers not only made up for a rhino’s poor eyesight by warning them of approaching humans, but also allowed rhinos to detect humans much faster and from a further distance.

And the more oxpeckers that a rhino carried, the further the distance of detection. Those carrying the birds were able to detect humans at an average distance of 61 meters—nearly four times further than rhinos without oxpeckers.

Once a rhino heard the oxpecker alarm call, it nearly always re-oriented itself to face downwind—its vulnerable sensory blind spot and, the direction from which humans favour hunting big game like rhino.

“These results suggest that oxpeckers are effective companions that enable black rhinos to better detect and evade encounters with humans,” he said.

Dr Plotz says that oxpeckers may have evolved this cooperative behaviour with rhinos as a way to protect their own valuable food source – ticks and parasites found on their rhino host — which have been increasingly driven to the brink of extinction by human overkill.

Ironically, oxpecker populations have also significantly declined in recent years, and are even locally extinct in some areas of Africa. This study suggests reintroducing the bird into rhino populations could bolster conservation efforts of both species.