By NewsroomOctober 17, 2019Uncategorized
No Comments

A collector who illegally traded endangered animal skulls on eBay has today pleaded guilty to selling the items without the correct documentation.

Michael Tang became the subject of a police investigation after listing a monkey skull for sale on the online market place, under the name ‘Zoskiapare.’

The 49-year-old from Cardiff had more than 50 specimens at his property including skulls of primates and gorillas, rare turtle shells, a rhino head, a dolphin skull and even a cabinet of human skulls.

The human skulls were thought to have been purchased online from various traders and sellers across the world.

Between August 2014 and August 2018 Tang had managed to sell a large mammoth fossil tooth and an armadillo shell. 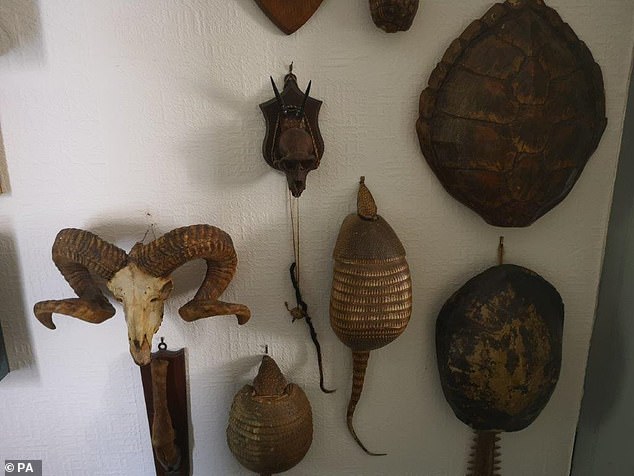 Original photo as published by the Daily Mail: One of the walls at Tang’s property in Cardiff showed he was also keeping Armadillo shells.

Trading the items is not illegal, however, an exemption certificate is needed in order to have the right to buy or sell such specimens from animals that are on the endangered list, or that are under immediate threat of extinction.

Tang had been in possession of 15 skulls that needed such documentation but only had documentation for one, which was a mummified chimpanzee.

This is while he also failed to secure the correct permits for importing and exporting endangered animals.

At Cardiff Crown Court he today pleaded guilty to 24 offences in relation to the trade of endangered specimens and confirmed selling them without the correct documentation.

As well as this he was handed a 12-week custodial sentence, suspended for 12 months.

His plea comes as the Crown Prosecution Service updated its guidelines on Wildlife, Rural and Heritage crime.

These guidelines included surveillance when someone is suspected of committing a crime as well as an update on breaches of conservation of habitat.

Stephen Head of the CPS said Mr Tang hadn’t been content with his collection and had profited from the illegal sale of rare items.

‘The controls in place for trading endangered animal specimens are vital to safeguard animals that are increasingly at risk of being wiped out completely.’

‘The impact that these crimes have on our environment and our communities cannot be understated, why is why we’re committed to building cases against offenders and ensure they’re held to account for their actions.’