By NewsroomNovember 16, 2020Anti-poaching
No Comments 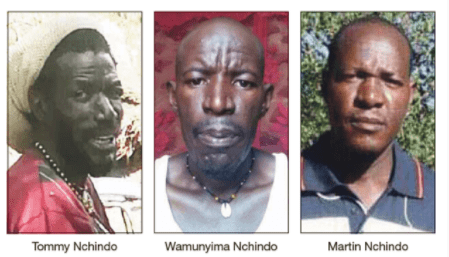 JUSTICE . . . Four Namibian fishermen were allegedly killed along the Chobe River by members of the Botswana Defence Force (BDF) on Thursday. The family are pleading with the Namibian government to take action. Original photo as published by The Namibian.

The Botswana Defence Force (BDF) has insisted that four Namibian men shot dead last week in the neighbouring country were part of a poaching syndicate which soldiers encountered in the Sedudu area near the southern channel of the Chobe River.

The BDF said the Namibians “are believed to be part of a network responsible for cross-border organised poaching”.

“The matter has been handed over to the relevant investigating agencies. As previously stated, there is an alarming surge of organised poaching for rhinoceros and elephants, especially in the western partof the country (Okavango Delta) and in the Chobe National Park,” colonel TeboKacho Dikole said in a statement yesterday.

Relatives of the four killed men are adamant that they were fishing in the Chobe River.

Family members accompanied members of the Namibian Police to Kasane in Botswana yesterday morning to identify the bodies of the four men.

According to George Nchindo, the bodies were positivelyidentified as those of his brothers Tommy Nchindo, Martin Nchindo and Wamunyima Nchindo and their cousin Sinvula Munyeme.

Funeral arrangements like the buying of coffins and digging of graves at their village at Impalila have commenced.

“Impalila is a very rocky area and digging graves is difficult,” George said. “The burial date will be determined by the process of releasing the bodies and their repatriation to Namibia.”

He added that the Namibian Police are coordinating everything related to the repatriation of the men’s remains to Namibia.

The Namibian government has not pronounced itself on the matter.

The only political communication came from Popular Democratic Movement (PDM) leader McHenry Venaani yesterday. In a strongly worded letter to president Hage Geingob and the minister of international relations and cooperation, Netumbo Nandi-Ndaitwah, Venaani called on them to take action against the government of Botswana and hold it accountable for killing innocent people in the Chobe River whose resources are shared by nationals of the two countries.

“We are complicit in this violence and killing because no thorough actions are taken to arrive at the bottom of these matters. These are serious and ongoing human rights abuses we are tolerating as a government, and all we do is release statements that matters are under investigation,” said Venaani.

According to Venaani, the killing of the four men, which is linked to illegal fishing in the Chobe River, fits into what he terms a “broad pattern of targeted attacks against our unarmed civilians who are not found guilty by a court of law”.

A concerned group of Namibians is planning a march to petition the Botswana High Commission in Windhoek.