Botswana concedes defeat in the fight against rhino poaching 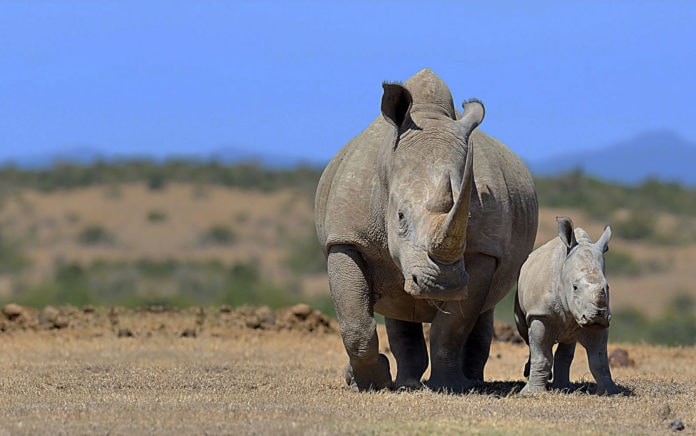 Botswana is waning in its fight against rhino poaching. Image: As originally published by Sunday Standard.

The poachers have won the battle as Botswana government concedes defeat in their continued fight against unrelenting rhino poachers who have killed at least 100 of the animals in the past three years.

The Department of Wildlife and National Parks (DWNP) has taken a decision to relocate the animals to an unspecified location in the North West District of Botswana to protect them from poachers.

“I cannot divulge the site (relocation site). An announcement will be made at the appropriate time,” he said.

Such is the seriousness of the rhino poaching situation in Botswana that the government considers it a threat to divulge information about the population of the endangered species.

“This is sensitive information to divulge for public consumption as it would readily be used by poachers,” he said when asked by this publication about the number of rhinos left.

Senyatso would not share the number to be relocated either, calling it an operational and sensitive information that he could divulge. The Director of Wildlife also refused to share statistics on the number of rhinos poached so far in 2021 save to say they would “shortly” issue a press release on the subject.

Addressing Sunday Standard questions on their dehorning exercise the Director said due to high incidents and numbers of rhino poaching in North West District, the DWNP took a decision to de-horn its rhino population in the natural wildlife areas and some in protected areas in Ngamiland.

“During a dedicated exercise from March to May 2020, a significant proportion of the animals were dehorned. I cannot divulge how many animals this translates into as this is operational information. Additionally, other animals have been dehorned opportunistically since then,” he said.

Poaching intensified over the past three years following the 2018 decision by the government to disarm the anti-poaching unit under the DWNP. The 100+ rhinos poached since the disarmament represents a 100+ percent increase in poaching incidents when compared to the previous three years when Botswana lost one rhino per annum in the preceding  2015, 2016, and 2017 when the unit had firearms. There were at least 12 rhinos poached in 2018, 29 rhinos in 2019, and over 50 poached by the end of 2020.

The war on poachers has since 2018 been led by the army Botswana Defense Force who have killed at least 24 poachers to date.

As part of their efforts to deter poaching the government decided to dehorn the rhinos but the exercise did little (if anything) to stop the onslaught as poachers reportedly began killing dehorned animals out of frustration.

Sunday Standard reported earlier this year how some poachers have reportedly been happy to collect the stubs left after dehorning in a mission to at least salvage something from the animals. They were also reported to be ruthlessly slaughtering calves without much horn. If the number of rhinos poached since 2018 is anything to go by, the government’s decision to disarm the anti-poaching unit three years ago has had a devastating effect on the fight against rhino and elephant poaching.

While the Botswana Defense Force (BDF) have boasted relatively small victories in killing poachers over the past couple of years, the efforts seem to pale in comparison to the number of reported cases of rhino poaching over the past few years.

While the government lifted the ban on trophy hunting in 2020, elephant poaching is also reported to be on the rise and with the impending relocation of rhinos the numbers are expected to surge, presenting another headache for DWNP and the troops fighting in the anti-poaching frontlines.

Despite the overwhelming evidence indicating the alarming reduction in the population of the endangered rhinos, the government seems not to be a hurry to reverse the decision on disarmament of the DWNP anti-poaching unit.

The government had continued to refuse to admit the true extent of the damage caused by the decision to disarm the rangers. In expressing the government’s refusal to heed the call for the rearmament of the game rangers the Minister of Tourism Philda Kereng said early this year that efforts were underway to address the legislative gaps that she said have constrained the (anti-poaching) unit to carry semi-automatic needed to carry out their duties. She said her Ministry was aware of the need to adequately resource the anti-poaching Unit but would wait to table a proposed legislation at a later stage. This was despite evidence that legislation already exists that empowers the Unit to carry the necessary weapons. Botswana, a long time darling of the wildlife conservation world, seems to have taken its foot off the conservation pedal. It remains to be seen how this will affect wildlife tourism in the coming years.