With just over a week to go until Botswana’s general election, NGO Political Animal Lobby (PAL) urges voters in Botswana to think wisely when casting their votes on 23 October and consider the importance of animal conservation to their country’s economic growth.

Tourism accounts for a fifth of Botswana’s economy and rampant poaching could have devastating consequences for their economy and people. Rhinos and elephants are being slaughtered at an unprecedented rate in Botswana and PAL lays the blame squarely on the present Botswana government.

“Botswana’s voters have an opportunity to do the right thing for conservation and to protect their country’s heritage. PAL hopes that the Botswanian people will use their votes wisely and elect candidates that recognise the importance of preserving the country’s wildlife, which is vital for their economy,” said PAL lead campaigner, Andrea Matthee.

“We believe strongly that much more needs to be done to protect Africa’s surviving wildlife. Many species are facing extinction and if we don’t act now, it will be too late. The present government has reversed decades of responsible conservation policies to pursue rural votes and make short term profits by legalising hunting.” 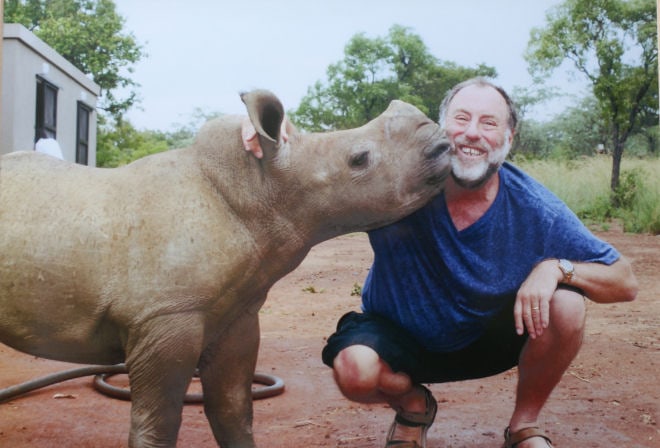 Original photo as published by Africa.com: A rhino with another PAL campaigner, David Barritt.

In recent months, Botswana President Mokgweetsi Masisi angered conservationists when he put elephants at the centre of his electioneering campaign to gain votes, stating that elephants were too numerous and threatened villagers. While his stance won widespread rural support, the economic cost could be very high as it directly impacts the tourism sector.

“The Botswana government has basically said that wild animals are a nuisance – a message that poachers have interpreted as giving them a signal that they will get away with killing wild animals.”

There has been mounting international criticism of Botswana’s decision to reintroduce elephant hunts and this week a report by Deutsche Presse-Agentur (DPA) stated that in the past six months alone, nine rhinos were killed for their horns. In 2016, only one of Botswana’s 400 rhinos was poached, and in 2017 no rhino was killed.