By NewsroomMay 18, 2021Anti-poaching
No Comments 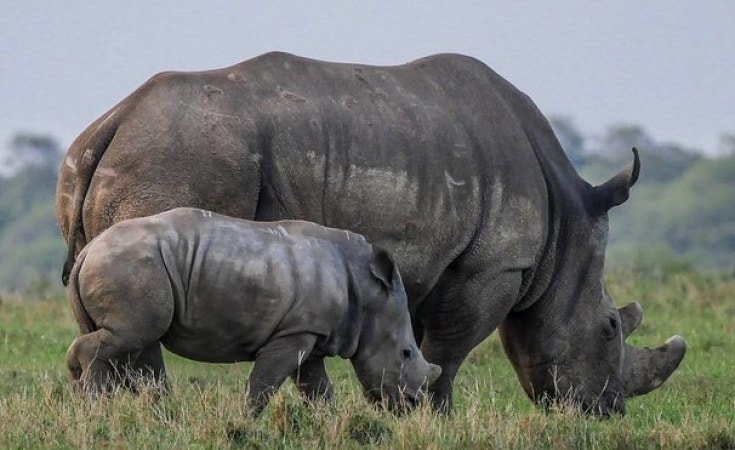 Poaching is on the rise. Image: Pixabay.

Rhino poaching in Botswana is getting worse, and the government is not helping matters in any way due to its split attitude on the crisis.

On the one hand, the government of President Mokgweetsi Masisi–in power since 2018–acknowledges the seriousness of the crisis but, when it suits it, the administration ambivalently denies any calamity and neglects taking decisive action.

Just a few months into the first wave of Covid-19 that the World Health Organisation (WHO) declared a pandemic in March 2020, Masisi rang the alarm bell about the deteriorating black rhino poaching epidemic in his country.

“At the rate at which the black rhino population is depleting, I’m afraid our iconic species will be out by the end of 2021. There is a serious problem with poaching in this country and this must be stopped,” said Masisi, as quoted by Lifegate, a sustainable development outfit.

Masisi repeated his worry about poaching–that he averred as a “national security threat”–at a subsequent military pass-out parade.

He told the graduating senior army officers: “You graduate at a time when this country is facing a security challenge, such as high levels of poaching which threatens to wipe out our wildlife resources, that’s threatening the tourism sector which is one of the key engines of our economy.”

And, early this year, his predecessor, Ian Khama–who bears commercial interests in wildlife tourism–took to Twitter and claimed that a whopping 120 rhinos had been killed by poachers in the preceding 18 months.

Khama warned that the rhinos that were being killed with their horns on or not would be gone and “none left for tourism to see” after the Covid-19 pandemic, pretty echoing what Masisi had already publicly stated.

The backlash from government went at a tangent, though.

The Department of Wildlife and National Parks (DWNP) accused Khama of making irresponsible statements and claimed that, in fact, poaching and other crimes linked to wild life had gone down by 70 percent since March 2020.

Even then, the DWNP director, Kabelo Senyatso, insisted that government would not be publishing poaching statistics as the information was sensitive.

But, despite this denialism on the part of the Botswana government, anecdotes of worsening poaching are available.

Up to 2014, Botswana was globally considered a “safe haven” for wildlife.

Rhino poaching has been driven mostly by Asian demand, particularly in China where the horns are valued for both social status and their perceived medicinal utility.

South African, Zimbabwean and Zambian poachers have invariably been accused of leading the killing of the horned animals, but there is a suspicion that military and intelligence officials are conniving with them.

Due to a widely publicised “shoot-to-kill” policy adopted in 1987 that was, however, never written into the country’s statutes, Botswana managed to reduce the poaching of endangered species like elephants and rhinos to insignificant levels.

This “zero tolerance” message was enhanced in April 2014 when then president, Ian Khama, banned trophy hunting to save various wildlife species that were threatened with extinction.

Masisi, though, reversed the policy when he took over, and also took away full automatic guns from the wildlife department, thereby reducing their effectiveness in fighting poaching.

It was this “zero tolerance” to poaching, political will and runaway poaching in South Africa, Zimbabwe and Namibia during Khama’s tenure which emboldened private safaris operators and government to import a breeding population that would, in the long term, multiply enough to support a phased re-introduction of rhinos to the wild.

By 2015, Botswana had imported over 100 rhinos from Zimbabwe and South Africa, mostly to Mombo, a high security sanctuary in the Moremi Game Reserve in the Okavango Delta.

The facility, owned by Rhino Conservation Botswana (RCB), was chosen for its difficult terrain that can only be accessed by horse, boat or helicopter.

Fitted with surveillance collars and guarded round the clock by the Botswana Defence Force (BDF) which was under strict instructions to guard the animals round the clock, the Okavango Delta rhinos were relatively safe then.

The return of poaching

In October 2018, the first reports of rhino poaching in the hot-spot Okavango Delta emerged with gory images of crudely de-horned carcasses.

Despite losing many in battles as the BDF fought back, the poachers occupied and spread across the Okavango Delta.

By mid-2019 they were using canoes and horses to penetrate Mombo, in spite of the tight security provided by BDF and private anti-poaching units.

A rhino poached at Moremi Game Reserve discovered on May 8, 2021

On October 4, 2019, the Botswana government reported that rhino poaching was spreading in the Okavango Delta: “The increasing poaching of rhinos is deeply worrying in a country that has, over the last few years, imported rhinos in an effort to revive and safeguard its rhino population.”

“We are alarmed, to say the least, by the ability of these poachers to penetrate so far into Botswana, and in particular their ability to target our recovering population of rhinos. As with many other rhino populations around Southern Africa, the poaching appears to be well-supported by criminal syndicates and the poachers themselves are hardened expert hunters,” the statement said.

The organisation said it was shocked that the unchecked killings were happening at the heart of one of the “perceived safe zones” of the Okavango Delta.

The Environment, Natural Resources Conservation and Tourism ministry in December 2019 released data showing that 31 rhinos were killed by poachers in the Okavango Delta between October 2018 and end of the following year.

“Botswana is under attack from organised international criminal networks employing African poachers with bush experience to do the shooting. It is highly likely that the criminal syndicates attacking Botswana are linked to those who targeted South Africa, Zimbabwe and Namibia over the past 12 years,” a distressed RCB noted.

Enter the poaching politics. Botswana stopped releasing poaching statistics in October 2019, in a move that left conservationists guessing the death toll and extent of the crisis.

Withholding statistics is typical of troubled governments–just like the Zimbabwean government at one time banned the publicisation of data relating to inflation when it felt that it might cause political disruptions.

Experts involved in the fight against rhino poaching told Information for Development Trust (IDT)* that the problem was now at its worst amid concerns that the Botswana government was not doing enough to stem the crisis.

“Rhino poaching has never been so intense and indiscriminate. Even de-horned rhinos are being shot and to remove the (remaining) stumps. The poachers are running rings around the BDF, hitting rhinos in the same place over and over again but still able to escape all the time.

“I think we have lost 25 rhinos to poachers since January, and it’s bound to get worse with so many different Zambian poaching gangs living in the Okavango Delta these days. They camp far apart but coordinate their activities in such a way that, when one gang, is disrupted, there will be others left behind to continue the poaching mission,” said a trusted source, who cannot be named for security reasons.

The surveillance collars that the Okavango Delta rhinos were fitted in 2015 had a three-year battery life and have not been replaced, the source added.

“In the beginning, the collars worked very well, but even then, not all the rhinos were fitted with collars. The batteries powering the collars expired in 2017-2018 and were never replaced. Whoever is shooting rhinos has (inside information),” said the source.

The heavy rains that fella across Southern Africa from November 2020 to March 2021 reportedly provided cover for many poaching syndicates that take advantage of full-moon nights to invade Okavango with inflated mattresses that they use to navigate the clogged waterways.

“At the height of the rainy season, there was an average of seven different Zambian poaching gangs operating in the Delta every night. We have recovered at least 25 carcasses this year and the death toll will rise because the Zambians are still here, poaching on a daily basis,” added the source.

In a study entitled “Poaching as a security threat for Botswana and the region” published by the US Naval Post Graduate School in September 2018, researcher Kopano Baruti attributed Botswana’s high vulnerability to poaching to weak law enforcement, long and porous borders and the existence of ungoverned spaces in its own territory neighbouring countries.

Zambian poachers have had the leisure to shoot selfies of themselves, posing with dead rhinos even before they de-horned the tuskers.

A series of selfies recovered from a suspected Zambian poacher who dropped a mobile phone as he escaped an army ambush showed some of the poachers aiming hunting rifles and others plunging knives into rhino carcasses. They also took photographs of the camps around which they operated.

International rhino charity Save the Rhino said of late, Botswana has failed to implement promises of tough action against rhino poaching. “Botswana has always held a tough stance against the poaching of wildlife. However, strong words have not always been backed by effective law enforcement.”

British wildlife conservation expert Pieter Kat said it was tragic that Botswana stopped issuing poaching updates because in doing so, it left a world that could have easily assisted it guessing whether the country needs help or it has contained the rhino poaching crisis.

Kat said it was surprising to that Botswana has to date not sought external assistance despite indications that the local security forces have lost the war against rhino poaching gangs.

“As in South Africa, the poachers are acting with impunity. They come from Zambia and cross into Botswana via Namibia and then walk straight into the Okavango Delta and Chiefs Island (in Mombo) where most of the poaching takes place. Botswana can do better by publishing annual rhino poaching statistics, acknowledging that the rhino poaching crisis is out of control and seek external help to avoid a second extinction of the rhino,” Kat said.

DNPW director Kganyago Senyatso declined to comment and referred IDT to a statement he made early in March when he said the department “has a long-standing policy of not discussing operational and security-sensitive anti-poaching information in the media”.