By NewsroomSeptember 26, 2019Uncategorized
No Comments

A taxidermist from East Lancashire has appeared in court accused of illegally trading in tiger skull and black rhino horns over a three-and-a-half-year period. Swimming instructor Aaron Halstead, 28, has been accused of either offering a range of endangered species for sale, or being involved in their illegal movement.

In a joint prosecution between the National Wildlife Unit and wildlife officers at Lancashire Police, following a raid on Halstead’s Burnley home early last year, he is also charged with purchasing or offering to purchase a number of other specimens. 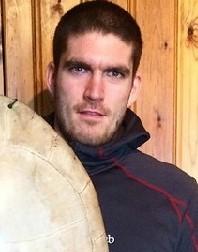 Original photo as published by The Lancashire Telegraph: Aaron Halstead, committed for crown court trial on a number of species involving the trade in endangered species.

Burnley magistrates were told that eight of the offences involved black rhino horns and another two concerned black rhino skulls, or parts of skulls.

The court heard two charges each related to offers to sell either sperm whale’s teeth or sawfish rostrums, while four other offences concerned the sales of either tiger skulls or teeth. Tusks and ivory from an African bush elephant formed the basis of another offence.

Halstead has also been accused of the prohibited keeping for sale of prohibited specimens, namely two tiger cubs and an African tree pangolin.

Magistrates heard that the 21 offences, all alleged to involve breaches of the Control of Trade in Endangered Species (Enforcement) Regulations 1997 and European Union wildlife trade laws, were alleged to have been committed between September 2014 and January 2018.

Rachel Barker, prosecuting, said that the crown’s contention was that due to the number of alleged offences outlined in the case, and the possible sentencing range available upon any eventual conviction, the magistrates’ powers were insufficient and the matters could only be dealt with at the crown court.

Each of the offences listed carries either a maximum of six months in prison or an unlimited fine, according to court papers. David Lawson, defending, who confirmed that Halstead would not be indicating any plea to the charges at this stage, made no representations during a 10-minute hearing. Magistrates agreed that the case should be committed for trial to Burnley Crown Court.

Halstead, of New Copy Barn, Glen View Road, Burnley, was released on unconditional bail by magistrates and told that he must attend for a plea and trial preparation hearing at the crown court on October 28.