Bwana, Munu, and the value of compassion.

By Peter BorchertDecember 2, 2020Editorial
No Comments 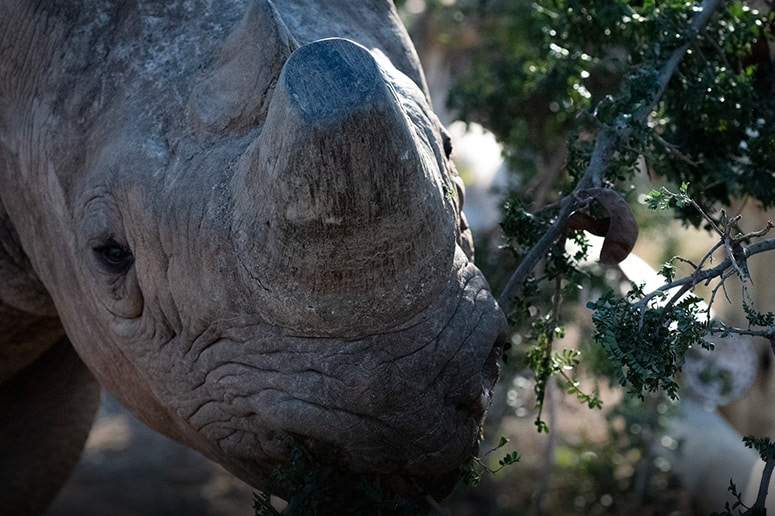 A small calf follows closely on its mother’s heels, for protection and so as not to get separated from her and lost in the thickets of shrubs and trees. Bwana was signalling his instinctual need for that behaviour: I was to walk in such a way that he could follow as closely as he liked in order to feel safe and comfortable. I was expected to behave as if I was his mother.
CONITA WALKER FROM A RHINO IN MY GARDEN

Caring for individual wild animals or providing sanctuary for a small group is a subject that arouses much discussion and often fierce argument in conservation. Some feel that while saving single animals is a nice thing to do, it’s not real conservation. Caring is not science. Instead, it is an expression of animal welfare. In some cases, there is an added jibe—that welfare actions are cynically used to illicit revenue, implying the consequence of caring for single animals is redirecting funding from where it is really needed, to safeguard whole ecosystems.

I would argue that there is room for both and that animal welfare and “big picture” conservation are complementary rather than antagonistic, either-or situations. But we do need to be careful, mostly in what we mean by the words and phrases we throw about so carelessly.

We tend, wrongly to my mind, to be all too eager to put people and their actions into boxes from which there is no escape. Think of a playground seesaw where animal rightists and animal welfare communities sit on the left and the sustainable use proponents sit to the right. Those on the left get branded as extremists—sentimental, irrational, emotional, and not living in the real world. While those to the right are also seen as extremists. But in this instance, ones who are cruel, abusive, and neglectful of the planet’s wellbeing.

Standing up for what you believe is right is fundamental to living in a free, democratic society. On the other hand, extremism is a dangerous path to tread, whether in religion, politics, or any other realm. Extremism stems from convictions so deeply held that the fundamental values of society are challenged.

Although conservation has its component of grudge-bearing animosities, thankfully, the extremist mindset seldom finds expression in militancy. We mostly manage to escape our boxes and cautiously make our way along the seesaw’s arms towards the fulcrum and the comforting balance offered by the middle ground. Compromise, I guess, is where most of us end up—at the point of least loss.

Compromise can, of course, be little more than a cop-out. But there is good compromise, just as there is bad. Author Karen Salmansohn, although talking specifically in the context of personal relationships, puts it rather well when she says that a bad compromise arises when you go along with something that makes you less of your full, authentic, thriving self. In contrast, a good compromise comes from being able to change in such a way that you grow more into your most full, authentic, best self.

I believe there are two vital components needed to reach the best conservation decisions: science and compassion. Simply put, science is the study of the nature and behavior of natural things. And it subjects the knowledge we obtain through a process of rigorous questioning and experimentation. By comparison, compassion is the ability to recognize the suffering of humans and other life forms and to take action to help. Whereas science is essentially amoral—it seeks the truth and nothing but the truth, compassion allows for a moral coating, for it suggests what we ought to do with that truth.

Perhaps conservation (the science) and compassion (welfare) can move cautiously towards the fulcrum of the seesaw. I like the term “compassionate conservation” as an overarching term to describe this movement, although it has already raised a red flag for some scientists. Nevertheless, to care and care so deeply that we do something about it is an acknowledgment of our essence as human beings.

Conita Walker, quoted at the head of this editorial, was the life-long companion and wife of Clive Walker, one of the most genuine, delightful, and tireless champions of African wildlife I have ever had the privilege of knowing. In her enchanting, happy, but sometimes sad A Rhino in My Garden, Conita describes the joy, despair, and every emotion in between of taking on the challenge of raising Bwana, an orphaned baby rhino. She wasn’t a scientist but was more keenly observant than many could dream of being. In the final chapter of her delightful A Rhino in My Garden, she reflects with passion and conviction:

“We’ll keep pouring as much of ourselves as we can into the fight for the preservation of what is precious, and wild, and voiceless in a callous world. Because it matters. Because I believe that we are diminished by the loss of so many of the other-than-human lives who share this planet with us. Every rhino that is killed, and killed with cruelty is an accusation—a black mark against our capacity to be fully, responsibly, human custodians deserving of our place on Earth. I believe that the rhino war is not just about rhinos: in the final analysis it is a call to the human species to rise to a higher understanding of what it means to be human.”

Clive and Conita’s lives have been lived in the wilds of South Africa’s northern Limpopo Province, but way to the south, just inland from the country’s eastern seaboard, Brett Barlow is beginning his journey with an individual rhino.

Munu is not a baby, but he will need to be cared for for the rest of his, hopefully, long life. He is a sturdy young bull whose only disability is that he is blind. When the vets at the Addo Elephant National Park discovered this, there seemed to be only two alternatives: to euthanize the poor fellow or simply leave him to bumble about in the veld where sooner rather than later his life would end. The wild has no place for weakness of any description. Brett saw it differently and is now Munu’s custodian. You can find out more about Munu and watch our video here.

Conita and Brett’s experiences are but two of the many instances worldwide that demonstrate the uplifting spirit of compassion in conservation. And for those who question the value of such actions, I quote none other than Charles Darwin, who stands tall amongst the all-time greats of science.

“Sympathy beyond the confines of man, that is, humanity to the lower animals, seems to be one of the latest moral acquisitions. (…). This virtue, one of the noblest with which man is endowed, seems to arise incidentally from our sympathies becoming more tender and more widely diffused, until they are extended to all sentient beings”.