Can NFTs help save rhinos from poachers?

By NewsroomNovember 22, 2021Anti-poaching, Science and technology
No Comments 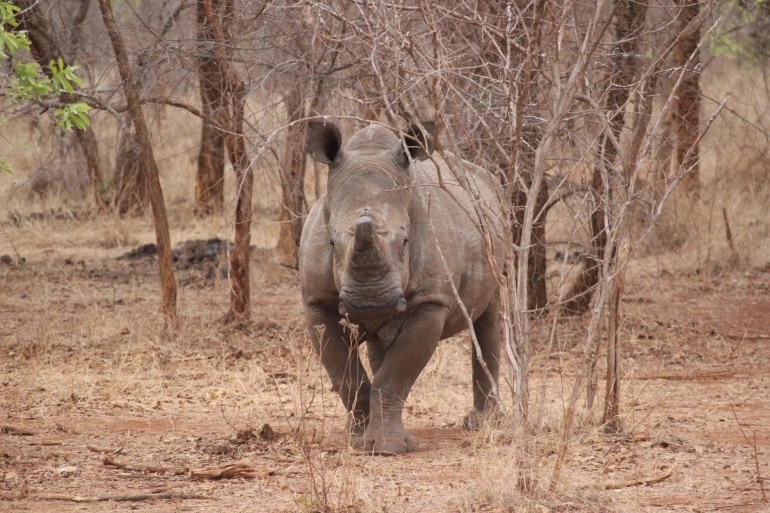 When Derek Lewitton bought a 3,000-hectare (7,413-acre) rhino reserve in South Africa’s Limpopo province four years ago, he promised the rangers at the sanctuary a bonus of a million South African rand ($64,600) if they could manage to go five years without a poaching incident.

With poachers kept at bay, Black Rock Rhino’s population has been able to breed and thrive, growing 20 percent a year to its current herd of 200, said Lewitton.

But that victory has not come cheap.

Roughly half of South Africa’s rhino population lives on private lands, where sanctuary owners face millions of dollars a year in costs to fund rangers and security infrastructure, veterinary care, and supplemental feeding in times of drought.

“The families that do this vital work are running out of money,” Lewitton said. “Without legal trade in horn, such operations are in dire need of alternative ways to fund their work and keep their operations alive.”

For years, poachers have brutally killed rhinos for their horns to feed an illicit market catering to Asia and other parts of the world. Rhino horn is used in traditional Chinese medicine and has also gained currency as a status symbol to flaunt wealth.

Trading rhino horns internationally is banned. A Wildlife Justice Commission study published in 2019 found that one kilogramme of raw rhino horn in Africa fetched an average of $8,600 on the black market, while in Asia the average black market price was more than $17,800.

Lewitton, a Stanford University law graduate and former corporate strategist, has advocated for legalising an international trade in conservationist-harvested rhino horns (conservationists safely dehorn animals under their care to protect them from each other). He argues that a well-regulated trade in ethical horns would help fund sanctuaries, and flood the market with legally harvested horns that would drive down prices, making them even less attractive to poachers.

Those efforts, though, have not yet born fruit.  Now, he’s pivoting to the world of blockchain technology, where he’s leveraging this year’s feverish appetite for non-fungible tokens (NFTs) to fund rhino conservation with virtual, one-of-a-kind horns.

“If we can leverage emerging digital technologies to create value as an alternative to the physical horn, we can save the rhino and create a true 21st century model for conservation,” said Lewitton.

Black rhinos were on the verge of extinction by the 1990s due to rampant poaching that decimated their numbers to below 2,500, according to the World Wildlife Fund. Conservation efforts throughout Africa have since pushed the population back up to roughly 5,600 today, but they are still classified as critically endangered.

White rhinos, which currently number 18,000 worldwide, are classified as near threatened.

In South Africa, the animals have been firmly in the sights of poachers. Between 2011 and 2019, the total white rhino population in Kruger National Park plummeted from 10,621 to 3,549, according to South African National Parks. Though poaching declined last year, due to COVID-19 restrictions, South Africa said incidents increased in the first half of this year.

Keeping out poachers, who sometimes mount significant firepower in pursuit of a payday, requires effective and expensive defences such as electrical fencing over vast terrains, vehicles to patrol them, and weapons and ammunition for rangers.

In an effort to help meet some of those costs, Black Rock Rhino has partnered with South African blockchain technology company Virtual Nation Builders, to tokenize rhino horns from the sanctuary into NFTs to sell at auction.

NFTs are digital files underpinned by blockchain technology – the same digital ledgers behind popular cryptocurrencies like Bitcoin and Ethereum. But unlike cryptocurrencies, an NFT is totally unique and the blockchain ledger it sits on verifies who is the rightful owner of that one-of-a-kind asset.

“We believe in the power of blockchain technology to unlock value for real-world action,” Pascal Nyasha, chairman of Virtual Nation Builders, told Al Jazeera. “In this case, the rhino horn NFTs’ sales will be used to fund rhino conservation efforts.”

“The event [auction] was an incredible success,” said Ahren Posthumus, co-founder and chief executive of Momint.

“There are still only 800,000 active NFT wallets according to nonfungible.com. That’s 0.01 percent of the world, which is why part of the aim of the event was awareness and starting a conversation,” he told Al Jazeera.

Conservationists are watching closely to see if NFTs can hold promise.

“It will take some time before we see how impactful it can be for rhino conservation overall,” said Esther Netshivhongweni, chairperson of African Community Conservationists. “We know that it is only private conservationists that are succeeding in keeping rhino safe, but we cannot expect families and communities to keep sinking their own funds into conservation endlessly.”

Lewitton acknowledges that NFTs are not a silver bullet, but they can play an important role in saving rhinos from poachers.

“To be clear, we do not expect the sale of NFTs to end the poaching threat,” he said. “But we know from experience that poaching can be stopped if the reserves protecting rhino have access to the funds they need to keep their security strong.”